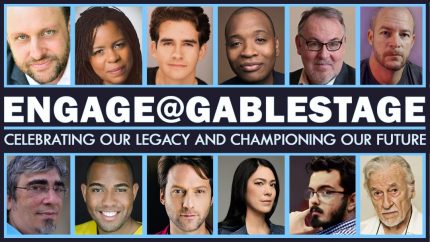 The actual stage at GableStage may be dark, but the company has replaced the rest of its virus-interrupted 2019-2020 season with a glimpse of what may be one of the evolving facets of the future of theater.

Beginning July 31 through September 25, one new piece will have its world premiere each Friday at 7 p.m. on the company’s website, staying posted infinitely and offered for free.

Several directly reflect the challenges of the pandemic as well as racial and identity issues. Some of the playwright-creators are often better known to local audiences as actors, although most have been working on written pieces for quite some time.

Gregg Weiner is local actor whose Reboot is “a dark and funny look at one man’s mid-life crisis in a time when exponential changes make him question his own sanity.”

Weiner have won awards and acclaim for acting, but he notes that “writing kind of runs in my family. My mom was a children’s story writer and she wrote scripts for the puppet shows that we ended up doing for the family business. My yoga teaching sister can write” as well. “And I found in school that I had a gift for writing” which came to a head when he had to produce a one-man project during his senior year at the New World School of the Arts.

“I’ve started so many projects writing and never finished them. So when this came up, I didn’t hesitate.”

Everyone interviewed saw this “intermission” in live performance as an opportunity.

“It could go both ways,” said Joshua Hernandez, whose Pretty Boy Josh will look at a gay, Latino and chronically ill lead character who echoes the writer’s own life. “This pandemic has kind of erupted a kind of creativity in how stories can be presented, to think outside the box and not just tell a story or act out a performance live. It has allowed us to learn new technology like editing software, how to film ourselves. So moving forward, it might benefit us if we still play around with introducing this into live performance as well.”

Jessica Farr, who is creating A Florida Story with fellow actor-filmmaker Caleb Scott, agreed. “We’re in uncharted territory and we don’t have to return to old modes of operating, we can ask ourselves the questions and reflect on new opportunities and find ways to experiment in presentation and form.”

The commissions overseen by project director Margaret M. Ledford were one-time grants from $1,500 to $3,000 for productions lasting from 5 to 15 minutes in any artistic discipline, and that “remain consistent with GableStage’s mission of producing work that confronts today’s issues and ideas with innovative productions.”

The grantees and their projects are:

Sight & Sound by George Schiavone and Matt Corey
Premieres: July 31
This special piece is a photomontage by photographer Schiavone set to a newly created musical score by sound designer Corey, which serves as a retrospective and new perspective on the GableStage productions of the past two decades.

My Black Body Is by Kunya Rowley
Premieres: August 7

An interdisciplinary performance will use song, spoken word, text, digital design, movement and photography to amplify the narrative of what it means to walk through life in a body that is black. How does it feel to inhabit a body that is revered, detested, over-sexualized, ridiculed, fetishized, profaned and killed? Black art song and Negro spirituals will provide the foundation for this performance to create this performance of celebration and reclamation of blackness that is part concert, part spoken word and wholly theatrical.

Rowley is a native of Miami and an alum of New World School of the Arts College’s opera program, but he traverses various genres. His credits include performances with Magic City Opera, Slow Burn Theatre, Opera Naples, Florida Grand Opera, Orchestra Miami, Nu Deco Ensemble, Hugh Jackman in concert, Illuminarts, Klezmer Orchestra, M Ensemble. He serves as a national reviewer for the National YoungArts Foundation’s voice category and is a creator and board member with Mangrove Creative Collective. He is also artistic director of Hued Songs, a performance series that explores and celebrates black history through the lens of black music and artists. A news release stated, “Kunya seeks to amplify black narratives through music and to be a conduit for accessible arts across a multi-cultural platform.”

Follows the journey of a young man trying to find connection in a galaxy that has shrunk to the dimensions of his parents’ home during lockdown. Is it possible to find love when the only good Wifi is in the kitchen and your mother is two feet away?

Urrutia is a recent graduate from FIU Theater’s BFA Acting program and seeks to experiment with “a better understanding of the relationship between the actor and the audience.”  Recently he directed Stein Time, three plays by Gertrude Stein. He also directed a program Post Military Plays, one-act plays Miami veterans. This fall, his one-person play, Chainmail, based on the life of Gary Gygax will be streamed.  Yawney is a Miami-based director,playwright and educator. He wrote and directed Exile Jesus Starbucks as part of Miami Light Project’s Here & Now. He also adapted and directed the Bulgarian play, The Spider for Alternative Theater Festival.

Aims to tell the stories of the voiceless people whose anonymous faces constantly pop up in mug-shots and headlines all across Florida – the misunderstood and the misrepresented, celebrating the secret trials and unspoken desires of the underdog, the outlier, and the renegade in the spirit of the world it is inspired by.

Scott and Farr both are well-known actors in the region.

A performance art piece that explores the stigma of homosexuality in the Miami Latinx community, illustrates the dangers of hyper-masculinity and voices the possibility of living an optimistic queer life. Told through the lens of a gay, Latino, and chronically ill young man, this piece utilizes video projections, voiceovers,
movement, acting, archive footage, and sound to express his personal story in a series of transitional multi-media waves.

Hernandez is a Miami and NYC-based actor and performing artist. The recipient of a Bachelor of Arts in Theatre from Florida State University and a student at Theatre Academy London, he has worked professionally on stage, in front of the camera and in immersive interactive spaces. As a gay Latino performer, Joshua is interested in creating content and telling stories that highlight the queer and Latinx experience.

On February 14, 2017 in Coral Springs, Rachel Finley lived a reality that every parent in modern America fears, hearing the words “There is an active shooter in your son’s school.”  American Bullet is a 10-minute segment of Rachel Finley’s yet to be produced one-woman show America Burning.  In this multi-media performance, she combines music, film, spoken word poetry, acting, symbolic movement and innovative costuming to create a visceral exploration of America’s obsession with violence, munitions and the price of our “freedom.”

Finley is a South Florida-based actor, director and writer.  Her work includes stage, film and performance art. Most recently, she appeared as Lena in Mad Cow Theatre’s production of Boseman and Lena. Since the start of the pandemic, she has performed in several online readings, including Play Development Project’s Touch the Moon by Arianna Rose, and Mad Cow Theatre’s Science Play Festival.

A dark and funny look at one man’s mid-life crisis in a time when exponential changes make him question his own sanity.

Weiner has been an acclaimed professional actor for over 20 years. He performed in 17 shows at GableStage, and took home Carbonell Awards for his work in Fifty Words and Farragut North as well as a “Best Of” from New Times for his portrayal of Mark Rothko in Red, all at GableStage. He has appeared in numerous commercials, TV shows (It’s Always Sunny in Philadelphia, Magic City) and on film in Transporter 2, War Dogs, Pain and Gain.)

Stars in the Bard by Colin McPhillamy
Premieres: September 18

A look at the connection between the Shakespearean canon and the astrology of the late 16th and early 17th centuries. Somewhere between Nicolas Copernicus and Isaac Newton, astrological knowledge slipped from common usage. How is it relevant today? And what did it mean to Joe Adler?

McPhillamy was born in the UK to Australian parents and trained in London at The Central School. New York work includes: Hangmen, The Ferryman, Ink, (Broadway), London Assurance, The Seafarer (The Irish Rep), The Importance of Being Earnest (Roundabout), House and Garden (Manhattan Theatre Club), Woman in Black and Waiting in the Wings). But he has also appeared extensively in South Florida, especially at Palm Beach Dramaworks.

A short sci-fi film and digital theater piece, 1/1000 follows a tech worker whose existential thoughts reach a fever pitch due to his isolation amidst a pandemic and racial tensions.  When he receives a mysterious device that allows him to adjust various statistics in his life, this sparks a chaotic shift in his reality, for better and for worse.

The playwright is also an actor and director.

For more information on ENGAGE@GableStage, and to learn about the artists and their projects, visit: www.gablestage.org/engagegablestage

ENGAGE@GableStage is made possible by the majority of GableStage’s season subscribers, who opted to donate the remainder of their 2019-2020 subscriptions back to GableStage to support the organization and the premiere of digital content; the Miami-Dade County Department of Cultural Affairs, and the Funding Arts Network.