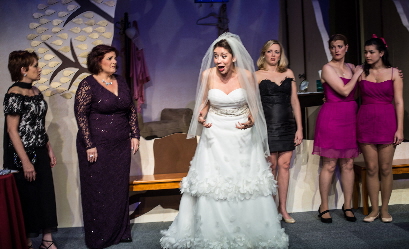 The cast of Undo, the last offering from Parade Productions

The three-year-old Parade Productions is shutting down as a purveyor of professional theater, its founder reported Wednesday.

Caplin wrote Wednesday, “Artistic dreams and financial realities don’t always go hand in hand.  As such, Parade Productions will no longer exist as we’ve known it.”

The company opened in 2012, mounting two shows a season in the upstairs theater at the Mizner Park Cultural Arts Center with such offerings as Brooklyn Boy with Avi Hoffman, The Last Schwartz and Undo about a divorce, all touching on Jewish life in the modern era. Most offerings were helmed by Artistic Director Kim St. Leon with Caplin acting in the shows.

Some productions fared reasonably well financially, but others failed to keep audiences coming after the opening weekend. Caplin wrote, “As all involved go on to new projects, I’m happy to say the company is debt-free, with enough in reserve to continue our endeavors with local charities. We’re proud of the work we’ve done, and the incredible talent those we’ve worked with have brought to the stage.”

Caplin wrote, “I, along with co-founders Karen Rosenberg and Franchesca D’Amore, set out to do good work with good people.  We’ve more than accomplished that. Thank you to each of you who helped achieve that goal.  It’s meant more to us than we can say.”

She cited the support of the Palm Beach County Cultural Arts Council, Evan Narlinger of Rebekah’s Dream and Associate Producer Gail Shank with a salute, “Here’s to those who do their damnedest to keep live theatre alive.”

It’s been a rocky season for theater in Palm Beach County The venue on the second floor of what used to be the Cartoon Museum lost another theatrical tenant, Outré Theatre Company, a small financially-struggling troupe moving to the Broward Center in Fort Lauderdale. Slow Burn Theatre Company, which is finishing out its current mainstage season at West Boca Raton Community High School, is also moving its large productions to the Broward Center after already moving its smaller productions there this season. Last week, Louis Tyrrell, founder of The Theatre at Arts Garage in Delray Beach, announced he was leaving the venue.

This entry was posted in News and tagged Candace Caplin, Parade Productions. Bookmark the permalink.