The Carbonells is soliciting nominations for the Vinnette Carroll Award that will be given out for the first time at the 45th annual ceremony in November.

This award honors an individual, theater or organization for significant achievement in advancing the cause of diversity, equality, and inclusion in South Florida theater.

It was part of the reorganization that the Carbonell board instituted during the pandemic following complaints that the program and the awards themselves did not adequately reflect the diversity of the community. Among other actions taken in response was to add diverse members to its board.

“While there have been a number of BIPOC Carbonell Special Award winners in the past, this new recurring award demonstrates the Board’s ongoing commitment to encouraging and honoring individuals and institutions that are specifically championing the growth of diversity in South Florida’s theater community,” wrote board president Jeff Kiltie.

The honor is named after the legendary playwright, actress, and theater director who was the first African-American woman to direct on Broadway and the first to receive a Tony Award nomination for directing, before moving to South Florida in the 1980s where she founded the Vinnette Carroll Repertory Company,

The nominations will be evaluated by the new Vinnette Carroll Award Committee which will recommend a honoree for the board’s approval.

That committee includes four current board members (Herman G. Montero, director of production at the Broward Center for the Performing Arts; William Nix, former vice president of marketing and governmental affairs for the Cultural Council for Palm Beach County who hosts the annual African-American Film Festival at the Kravis Center for the Performing Arts; Geoffrey Short, president of the board of directors of the Pembroke Pines Theater of the Performing Arts; and Broadway, movie, TV and cabaret star Avery Sommers, who is both a Carbonell Award winner and a seven-time nominee), plus longtime Carbonell judge Christine Dolen, who was theater critic for the Miami Herald 1979-2015 and continues to cover culture for ArtburstMiami.com.

Before June 1, email nominations to Geoffrey Short at geoffshort66@gmail.com. Please include the nominee’s name and why you believe he/she/they are worthy of consideration for this award. 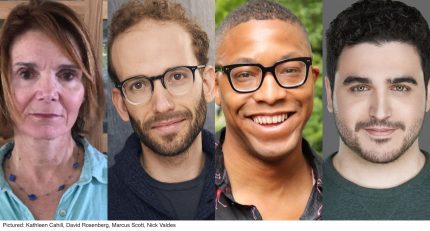 Zoetic Stage has announced the four winners of its second annual Finstrom Festival of New Work whose plays will be presented in readings this month in Miami.

The works are: One Stone: The Story of Mileva Marić and Albert Einstein by Kathleen Cahill; Effect If Not Intent by David Rosenberg, Sibling Rivalries Or, Spooks in the Ivory Tower by Marcus Scott and The Public Execution of the American President by Nick Valdes.

The winning plays will each be given a workshop with directors, dramaturges and actors, where the playwrights will be able to further develop and ready their plays for full productions. The workshops will culminate in a three-day festival of readings from May 19-21 co-presented with and hosted at the Adrienne Arsht Center in Miami, live and in person in the Peacock Foundation Studio.

The readings are free and open to the public. Tickets will be available on Eventbrite on Wednesday, May 4th beginning at noon. More details about the festival including casting and showtimes are forthcoming.

The festival is named after beloved South Florida playwright and arts patron Tony Finstrom, who was a long-time Carbonell Award judge and founder of the Silver Palm Awards. The author of numerous plays, Finstrom was the recipient of various honors including the Charlie Cinnamon Award and the South Florida Theatre League’s Remy Pioneer Award.\ Finstrom passed away in December 2018.

Additionally, six other plays were chosen as runners-up: Tigress of San Domingue by France-Luce Benson, The Many Wondrous Realities of Jasmine Starr-Kid by Stephen Brown, Deafening by Tracy Chutorian Semler, The Experience by Jahna Ferron-Smith, Black Girl Joy by Phanesia Pharel, and Pangea by Scott C. Sickles.

“There were so many stories that we read that need to be told – I wish we could tell them all,”  said festival coordinator Gabriell Salgado. “Zoetic Stage’s goal is for the Finstrom Festival to grow and evolve until we are producing fully-staged new work in a repertory format,” says Zoetic Stage Artistic Director Meltzer.

About the winning playwrights

Kathleen Cahill writes plays about science and politics.  Her work has been produced around the country.  She is the recipient of three Edgerton Foundation Awards, the Jane Chambers Playwrighting Award, two Connecticut Commission on the Arts Playwrighting Awards, a Massachusetts Artists Foundation Award, a Rockefeller Grant, a National Endowment for the Arts New American Works Grant, a National New Play Network Commission, and a Drama League Award. She was a Dramatists Guild Fund Travelling Master.  Her play Charm (NNPN Showcase) was nominated for a Pulitzer Prize; her play The Persian Quarter was nominated for a Steinberg Award. She is also an opera librettist and a lyricist. Her libretto The Better Man was commissioned and produced by Utah Opera. Her new musical LATE will be seen in June at the Boston Center for the Arts. She writes what Alan Cumming says on PBS’s Mystery.

David Rosenberg is a playwright, screenwriter, and actor born and raised in Miami. His plays include Effect If Not Intent, What Else Is True?, Undecidable Propositions, and the one-man musical extravaganza Absolutely! His work has been developed at Egg & Spoon Theater Collective and 29Salon, and have been semi-finalists for the O’Neill, the Theatre 503 International Playwriting Award, the Jewish Plays Project, and The Orchard Project, among others. His play I Would Never Lie to You was commissioned by The Juilliard School, where it was meant to premiere on March 19, 2020. He holds an MFA from Juilliard, a BFA from NYU, and a high school diploma from Palmetto Senior High.

Nick Valdes is a South Florida Theatre Artist, graduate of New World School of The Arts, as well as an alum of the British American Drama Academy’s Midsummer in Oxford program. He played Antonio in New City Player’s Twelfth Night, and has done a few short films in the Miami area. His short play The Handicap was produced by New City Players for their LabFest production, and was the recipient of the Audience Favorite award. He wrote “…TPEoTAP is a play conceived while working as a stagehand for Gablestage after having many hearty discussions with Joseph Adler, and as such it would not be on paper without him. He was truly an inspiration.”