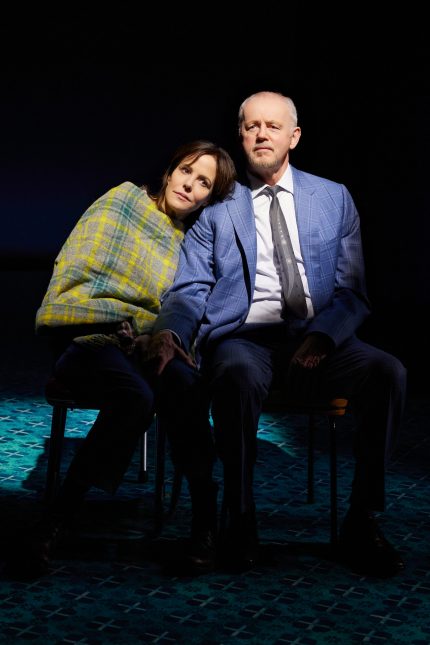 The horror in the brilliant revival of How I Learned to Drive is only in the audience.

The characters in this drama about incestuous child abuse almost never raise their voice, least of all the victim/narrator recalling the intensifying arc now that she is in middle-age. Emotions of fear, confusion, guilt and regret remain deeply buried inside their everyday existence.

But they are discernible in superb performances by Mary-Louise Parker and David Morse under Mark Brokaw’s nearly invisible direction of Paula Vogel’s 1992 benchmark play running at the Manhattan Theatre Club.

Li’l Bit’s present demeanor is almost bemused, never forgiving her beloved Uncle Peck for seven years of escalating molestation, never quite condemning him for the outrage she fully recognizes now, perhaps communicating the slightest twinge of compassion for a troubled man, and granting her own pardon for the naivete and the need in a lonely girl that his attentions nourished.

Vogel’s acclaimed script about pedophilia, manipulation and symbiotic needs not only stands up a quarter-century later, but rings ever more loudly in this time of #metoo, with all three of the aforementioned artists slipping back into the piece despite the chronological march of time.

Li’l Bit recalls to the audience her complex long-term relationship with Uncle Peck, who taught her to drive while routinely molesting her from age 11 through her teenage years.

The Pulitzer-winning script, which ricochets across time and place, has Li’l Bit portraying herself growing up in rural Maryland, a precocious child whose grandfather belittles her educational aspirations with like “How is Shakespeare going to help her lie on her back in the dark?”

In a disturbingly symbiotic liaison, she courts sympathy and a sense of worth in the gentle attentions of Uncle Peck, a chronic alcoholic who becomes her surrogate father.

Vogel, Brokaw and the cast intentionally keep the tone restrained. Morse, once the lovable doctor on TV’s St. Elsewhere and the broken Larry Slade in a revival of The Iceman Cometh, is never some slobbering creepy monster. His Peck is a genial, tamped down, troubled person in need who genuinely cares for his niece. Obviously, you cannot approve, endorse or even forgive him at all, but you understand the conflicted man inside.

In each step down this road, Peck says something to Li’l Bit along the lines of “I am not going to ask you to do anything you don’t want to do” — although he senses her need for paternal support will push her into it.

Indeed, we never see any actual physical molestation until the deftly staged penultimate scene, and even then, it’s done in an almost objective way.

But the audience’s knowledge from the first moments exactly where this arc is heading is the crucial subtext that makes each tiny sexual step in Peck’s driving lessons upsetting, even frightening.

Also indirect criticism in the script is that her family either isn’t paying attention to her or never objects if they suspect anything. When the 11-year-old first asks permission to go on a country ride with good ‘ol Uncle Peck, her mother says, first no. “I don’t like the way he looks at you,” her mother muses. And then she agrees.

Parker, an expert at portraying quirky characters such as the brilliant daughter in Proof, dives so deeply into Li’l Bit that she becomes her – you don’t catch her acting but being. She makes credible L’il Bit’s narration being leavened with humorous observations. Her voice and body language drive home that surface bemusement barely conceals years of internal damage. It’s as if her matter-of-fact telling us the story is a way of finally exorcising the demons.

Alyssa May Gold, Chris Myers and Johanna Day create a kind of Greek chorus and plays numerous roles regardless of their actual age and ethnicity.

Day, who was also in Proof, plays Li’l Bit’s aunt and Peck’s wife. In a speech to the audience, she has the same deeply muted mien in which she makes it clear with acceptance – really rationalization — that she knows what’s going on, blames Li’l Bit for “twisting him around her little finger” and that she knows it’s not the first time he’s strayed from the marriage.

The set is no more than three chairs and a few telephone poles in the background; most of the numerous scene changes are established by Mark McCullough’s lighting.

This play was an artistic success locally in 1999 with a production by the now gone New Theatre with Pamela Roza and Matthew Wright, and a few months earlier at the now gone Caldwell Theatre with Kim Cozort and David Forsyth.

But with the right casting and direction, someone ought to mount it here again.

How I Learned to Drive is extended to run through June 12 at the Manhattan Theatre Club. Tickets: https://www.manhattantheatreclub.com/