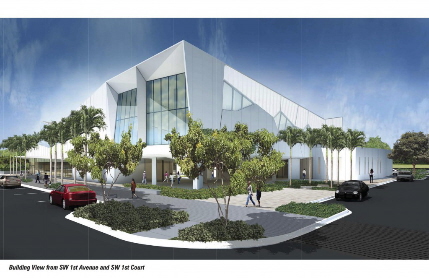 Outré Theatre Company and Curtain Call Playhouse, two troupes that have played at many different venues, plus TheatreSouth, a fledgling African-American company, will have a new base of operations later this year: the Pompano Beach Cultural Center and Library slated to open this spring.

They will be among a diverse collection of 11 non-profit regional arts groups to be resident companies performing in the new building at least through the end of the 2018 season, a group dubbed the Cultural Alliance.

Cultural Arts Creatives (also known as The Creatives), which manages the arts portion of the $20 million multi-purpose building for the City of Pompano Beach, also plans to commission a work featuring all the Alliance members. The venue will also host jazz and blues concerts beginning in May.

The performance space at 50 West Atlantic Boulevard is a large black box space with flexible seating configurations with room for up to 400 patrons. The building is still under construction but is expected to open for a series of festivities such as a preview fundraiser April 22 and others in May, said Alyona Ushe, president/CEO of The Creatives. Ushe previously managed Arts Garage in Delray Beach.

Outré Theatre Company is a small professional troupe that takes chances with material worthy of its name, ranging from the acclaimed two-man musical Thrill Me to the edgy Bloody, Bloody Andrew Jackson to unique spins on Shakespeare. Founded in 2012 by Artistic Director Skye Whitcomb and Sabrina Lynn Gore,  among others, it has moved from Mizner Park Cultural Center to the Broward Center’s Abdo River Room to the Evening Star Theater in Boca Raton to the Showtime Performing Arts Theatre in Boca.

Three Outré shows have been penciled in:

Curtain Call Playhouse is a professional theater that has toured its productions across South Florida for 20 years, usually presenting a single show in three different venues. They will continue to produce work in multiple stages around Broward and Palm Beach counties, but this arrangement gives it a reliable base.

“Curtain Call Playhouse is so honored to have been selected to be one of the 11 Alliance members of artistic companies that will perform at the new Pompano Beach Cultural Center. We have been invited to be the first company to perform there, in honor of our 20th anniversary,” said Kris Coffelt, artistic director.

“My dream was to always have a theatre in Pompano Beach. I believed this northeast section of Broward County was the ideal location to attract audiences and tourists to our area, and a cultural center was needed here. There is new management in the City of Pompano Beach, and the timing was finally right, they are one hundred percent behind cultural arts for our city. I couldn’t be happier for this opportunity for Pompano Beach, Curtain Call Playhouse, and the Alliance companies.”

On April 29, the group will offer excerpts from The Lion In Winter and I Love You, You’re Perfect, Now Change.

Dates penciled in for Curtain Call are:

TheatreSouth is a young, low-profile company providing “family-oriented projects for all ages” so far focusing on African-American culture.  The company founded by Herman Levern Jones has mounted I Have A Dream, a musical at the Robert Morgan Educational Center and the South Miami-Dade Cultural Arts Center, and The Eve Of Jackie about the life of Jackie Wilson at the Arsht Center in Miami.

Full season schedules for the center, grand opening festivities and fundraising events will soon be announced on the website, www.ccpompano.org.