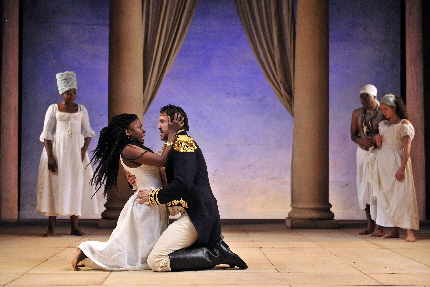 GableStage is raising money for its January production of Antony and Cleopatra with a method that wasn’t even invented when the theater was founded 15 seasons ago – online crowdsourcing.

The Coral Gables theater is trying to raise $55,000 in pledges through Dec. 21 through Kickstarter.com, a website that allows virtually anyone to raise money for virtually any project.

The catch, besides Kickstarter taking a percentage of the money, the target figure must be pledged by 8:25 a.m. Saturday, Dec. 21 or none of the money is collected.

Much is riding on the financial and artistic success of this adaptation of the Shakespearean drama by Miami native Tarell Alvin McCraney, being co-produced by Royal Shakespeare Company and New York City’s Public Theater.

One aspect is the way Miami and the world view the region as a theatrical center. Producing Artistic Director Joseph Adler wrote in an email Monday, “This project promises to mark a watershed moment in our growing reputation as an international destination for performing arts. Through the power of crowdfunding we are looking to involve a whole new audience as an integral part of this thrilling production.”

The $55,000 would help defray GableStage’s $700,000 share of the $2.1 million cost of this production. GableStage’s share is several times larger than its most expensive production. The project already has some funding from the Miami-Dade County Department of Cultural Affairs and an arts challenge grant from the Knight Foundation.

But the project is a huge challenge. To begin with, the show will be held in the 415-seat Colony Theatre in Miami Beach rather than GableStage’s 135-seat home in the Biltmore Hotel. Adler joked drily about the challenge in “filling 400 seats in Miami Beach for Shakespeare. We’ll be lucky to break even.” Even so, ticket sales only pay a percentage of the expense.

More is riding on it than just money. Combined with McCraney’s adaption of Hamlet produced last winter at GableStage, the project is meant to sow the seeds for McCraney’s dream of a winter Shakespeare festival in Miami.

Additionally, GableStage is being scrutinized as the likely company to operate a new theater on the grounds of the current Coconut Grove Playhouse if the county can work out a deal by mid-January with the state, which owns the property and various Playhouse creditors.
.
Antony and Cleopatra is just the latest project for the very busy McCraney, a former Royal Shakespeare Company associate and the new recipient of a MacArthur genius grant. In keeping with his love of classic literature viewed through an impressionistic prism, McCraney has transported Shakespeare’s words to 18th Century Haiti on the eve of the revolution against French colonialism. McCraney has used the romance to underscore the clash of two cultures.

The production directed by McCraney bowed earlier this month at the RSC’s Swan Theatre in Stratford-Upon-Avon with a British-American cast. It moves to Miami Jan. 9-Feb 9 and then plays at the Public in New York.  The show will also be performed in the mornings for free for Miami-Dade high school students.

The Kickstarter project only accepts $1 minimum pledges, but a $50 donation or more is tax-deductible. Every donation earns a reward of sorts, ranging from a thank you tweet to the free use of the theater for one night. Also offered are playbills and posters signed by McCraney, free tickets and the like.

To see a slideshow of photographs from the RSC production, click here.