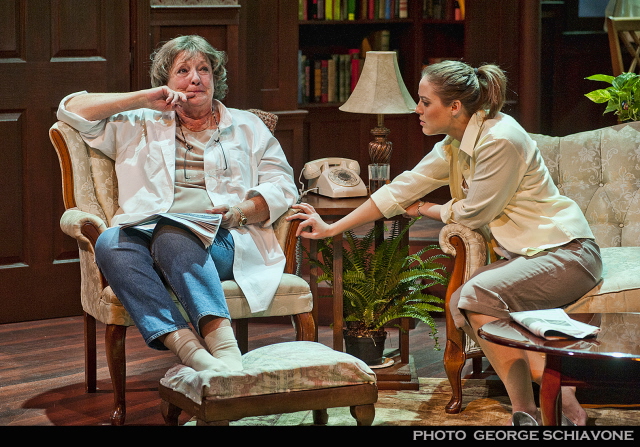 If personal reasons motivated Richard Jay Simon’s resignation from the Mosaic Theatre that he founded, it was money that caused his board to close his “baby” Sunday, according to Simon and board chairman Myron Levy in interviews Monday.

The company was not in dire financial straits , but the board believed Simon’s planned departure at the end of this 12th season would create a financial setback that they could not overcome, Levy said.

That led to the board’s decision to shutter the company immediately with three shows left in the season out of a sense of fiscal responsibility, even though Simon had been planning to helm a transition to new leadership to keep the theater operating indefinitely, the two men said.

“We could have survived,” said Simon. He had considered possible successors and was working on a grant application the Friday before the board made its decision Dec. 3. “I understand the dollars and cents of it all, but everything in my heart and soul wanted to do anything possible to make it go on.”

The day after the announcement Simon was awash in conflicting emotions. “I’m excited about a new chapter, but I’m mourning the loss. It’s hard when you want the theatre to live. It’s not the fairy tale ending I would have written.”

But he reiterated that the crushing demands of running a theater as its executive/artistic director would have robbed him of the opportunity to devote time to his wife, Dyani Batcheller-Simon, and their child due about Jan. 8. “It was a quality of life issue.”

The board’s decision was rooted in interlaced economic and ethical issues, aggravated by a weak economy in which fund-raising and grants are at least as crucial a funding source as ticket sales, Simon and Levy said.

A key piece of the puzzle is a common technique among regional theaters coping with temporary shortfalls in cash flow. Specifically, money collected in the latter part of the season for the next season’s subscriptions is often used in tough economic times to cover operating costs in the current season.

The board felt that it would be dishonest not to tell future subscribers about Simon’s desire to leave at the end of the season, a move that they predicted would gut future sales because Simon’s taste and skill are a major selling point with subscribers, Levy said.

“How could we in good faith (tell people we were) moving forward with an uncertain future?” Simon said.

Similarly, Mosaic had planned its annual fund-raising gala banquet plus another of its Monte Carlo nights. The board was doubtful the evenings would be as effective in raising money if Simon was not attached to the theater’s future.

The final problem was that the Mosaic board, unlike some others, does not have the skill or community contacts for raising funds, Levy said.

“We knew going forward that even if we could get through the year, it would be tough. We didn’t think it was responsible to fool anybody. We wanted to be honest,” Levy said. “I think if Richard would have stayed we maybe could have gone on.”

Mosaic had the support of the audiences, he said. “The basic problem is the economy went down. That’s when things started turning. We never really caught up. We just didn’t get the corporate sponsorship that other theaters have. We were not a fund-raising board; we didn’t have a lot of money and we didn’t have the influential connections,” Levy said. He also noted that government grants shrank.

The Mosaic was the leading non-profit theater in Broward County and its closing marks the fifth significant theater to shutter in South Florida in recent years. It joins the Coconut Grove Playhouse in Miami in 2006, Florida Stage in West Palm Beach last year, and just this year, The Promethean Theatre in Davie in March and Caldwell Theatre in Boca Raton this spring. The closing unnerved some arts partisans, even leading a few actors to wonder if there remains enough work locally to make a living.

The professional theatrical community was surprised and shocked in the aftermath of the announcement. Facebook was jammed with messages from actors and playwrights thanking Simon for his support and posting photographs of their favorite appearances at the theater.

Asked what he was proudest of, Simon said, “It’s too soon to reflect on what I’m proud of.” Instead, he vented a feeling of guilt. “Ultimately, a succession plan wasn’t in place when I left, but it was time for me to turn a page.”

Over recent years, Simon has expanded the operation from a one-man band to include a tiny staff including Associate Director Jon Saldivar and Production Stage Manager Linda Harris. Last summer, Simon said that he was cutting back on his hands-on directing duties this season to concentrate on the financial end of the company, which had an annual operating budget of about $450,000.

But Simon, 37, said he has been “waffling” for months about the killing schedule’s effect on a family life, especially with a child on the way.

“For a long time, I’ve been talking to artistic directors, locally and beyond, and almost everyone said ‘If  I had to do it over again, I wouldn’t have been involved in the theater; I neglected my family.’

“I think when I was younger, I was idealistic; the play is the thing. But as things get closer, (you see) everything happens in a blink of an eye and I don’t want to miss that.”

As a result, he told the board about three weeks ago that he wanted to leave at the end of the season. He began in earnest working on logistics, thinking about a search committee for a successor and even working on a Shubert Foundation grant proposal Dec. 7.

But when the board met Dec. 10, Levy said, they concluded “it was a great theater and it had done a lot of wonderful things and there was nothing to be ashamed of, but without Richard there….”

The board agreed to reimburse subscribers for the cost of the three shows that won’t be produced. Checks are expected to be mailed out at the end of the week.

Surprised by the board’s decision, Simon truly has no solid plans for the future and no idea whether he will seek a career connected to the arts, although he expects he will continue to serve it, perhaps as a board member.

And in the never-say-never department, he said with a chuckle: “I’m not going to close the door. Maybe in 12 months I’m going to miss it and I’ll call Linda and Jon and Matt (Corey, the sound designer) and say ‘We’re crazy…. we’re addicted to misery. Let’s get the band back together.’ ”