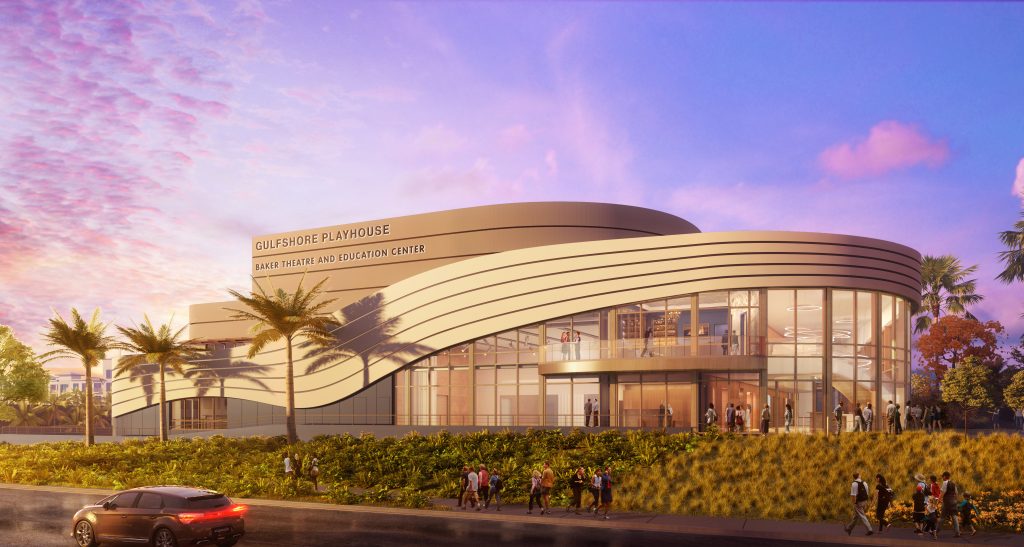 Gulfshore Playhouse has defied the economic meltdown of an art form struggling in a pandemic, exemplified by breaking ground on a $60 million venue located on the same Naples lot where it was first envisioned 18 years ago.

Simultaneously, the regional theater’s prestige was affirmed this month by being accepted as the 77th member of the prestigious League of Resident Theatres (LORT), the largest association of professional theaters in the United States and only the fourth in the state.

The two events over the past few months underscore the quiet solid rise of a company benefiting from the double blessings of a track record for dependably solid productions and the fiscal support of a well-heeled citizenry hungry to enlarge an ambition to be a cultural hub.

“I think we’ve always had an angel on our shoulder,” said Kristen Coury, CEO, producing artistic director and founder of the company. “And the fact that between December of last year and June of last year, we raised $32 million was really America in the middle of the pandemic.”

The capital funding has been mouth-dropping for a southwest Florida community of about 322,000. The town’s economy is heavily rooted in tourism, but the region is notable for a population of wealthy residents living in mega-mansions lining the ocean and the bays.

The campaign has accumulated $55 million over the past six years in donated funds and committed pledges toward the project. But it raised a major percentage of that just during the challenging past three years with several people kicking in six-figure checks and some seven-figure gifts.

Patty Baker, a board member and a Broadway producer for a decade, was quoted in a news release, “Jay and I have always believed in laying eggs where we nest, and we nest in Naples.”

The project located just east of the entrance to the downtown business district is envisioned as part of an expansion of that area.

Jay Baker, co-founder of the retail chain Kohl’s, was quoted as saying, “We know this project will create transformational change in downtown Naples and enhance the vibrant redevelopment occurring in the downtown area.”

The money is still flowing in: At the gala groundbreaking in December, Naples residents and philanthropists Glenda and Rich Struthers pledged to match all future gifts up to $1.5 million through the end of 2022.

But many donations have been several zeros short of that from people with less income. People “just want to come see great theater,” said, Kristen Coury, the current CEO & Producing Artistic Director.

Slated to open in fall 2023, the Baker Theatre and Education Center will feature a 350-seat mainstage with a Broadway-sized stage, a 125-seat flexible studio theater, a combination rehearsal and event space, plus a wing to house the theater’s growing educational programming.

The venue, currently on vacant land, will be quite a change from its current home. The theater has been one of the tenants inside the cramped Norris Center, a municipal building run by the City of Naples, which has so little space that its sometimes difficult to get from one side of the stage to the other behind the scenery.

Today, Gulfshore Playhouse has a $5.2 million debt-free operating budget and is re-hiring back to its staffing level of about 40 people.  It produces a regular season between October and May; a cabaret series; summer programs (including two full-scale productions) serving children ages 6-18; an annual New Works Festival; theater classes; and the Synergy Series, which offers free opportunities for audience members to dig more deeply into the content of the plays onstage.

The journey began in 2004 with the arrival of Coury who had spent years in New York City working for Broadway producers.

She realized that the evolving arts community lacked a local professional theater, although there were some in neighboring towns and some community theaters. Unlike southeast and central Florida, there was a limited number of professional theater artists living in the area; they would have to be attracted from across the region and the country to come work there. Her vision dovetailed with the desire to beef up Naples’ arts offerings among the sophisticated community residents accustomed to quality arts opportunities in the major cities they hailed from or visited frequently.

“I suppose the keyword… would be visualization,” Coury said. “From the very beginning… it was closing my eyes on the balcony of my apartment where I started, in my back bedroom, looking across the street at the piece of land… and visualizing a theater emerging from that land. And somehow, through a search that took over three years and encompassed two counties, we ended up exactly on that land.”

Over the next year and a half, Coury single-handedly created six fundraising events, featuring headliners such as Carol Channing, Carol Lawrence and Anna Maria Alberghetti.

Despite having no dedicated base of operations, rehearsal and performance space, or a location for set building, storage, and office space, the company performed its first full-scale production in 2006: David Mamet’s controversial play about alleged sexual harassment Oleanna.

The operation soon moved into the Norris Center with a 200-seat performance venue. By 2012, it was offering six full performances in a season. It created educational programs such as in-school residencies plus after-school and summer programs created in in 2009.

While it produced numerous titles recognizable to its supporters, it inaugurated the festival bringing playwrights, directors, and actors from around the country to nurture the growth of new plays. In its 2013-14 season, it produced it first world premiere, The God Game, by Suzanne Bradbeer, with other first-time productions in succeeding years.

But when the pandemic hit in March 2020, the theater coped by laying off three-quarters of the approximately 40 employees.

“We were sitting there, eight people left and looking at each other on our little screens from our own homes … and saying, how in the world do we keep this live enterprise alive when we can’t gather?” Coury said in a phone interview.

The answer was not to sit still. The staff kept touch with their patrons and supporters with a range of online offerings from Zoom events to talk shows with artists called Artful Distancing.

They continued to develop a one-man show that had been in the works with the hope of opening it in the fall. But the Actors Equity union would not give permission for that production.

In January 2021, the union did approve a live in-person run inside an auditorium of Love Letters, A.R. Gurney’s two-person play. “We said it was a married couple (performing). And nobody got sick and everybody stayed safe.”  It was one of as few as 17 productions approved by Equity at that time, and several of those were staged outside or were streamed.

They asked for permission again for a small on-stage outing with a cast of a married couple. “We did another small play called Maytag Virgin last March. Then we partnered with our local hospital, and we did a few performances in there as well. So, between January and March 21, we presented 47 nights of theater, and we (served) 7,000 people,” she said.

Meanwhile, a decision had to be made about the fundraising.

“We had been at $22 million, I think, going into the pandemic with a $60 million goal. And when the pandemic first hit, we… said, of course we can’t be asking people for money. We’re in the middle of a global crisis. But as 2021 started to wear on, we became aware that the stock market, despite everything, was doing great…. So, we started to ask,” she recalled.

The response was gratifying. She thinks the underlying explanation might be, “whether that people missed socializing and missed gathering and maybe that was an additional catalyst, or people were just excited to get invested in something that was growing… or whatever it was. “

It helped that the theater had been choosing projects that people wanted to see, or unknown titles that patrons were willing to take a chance on based on the theater’s past work.

This season opened with August Wilson’s Radio Golf, the last play chronologically in his century-long account of African-American life; then the world premiere of Higher, the delayed one-man work written by frequent Gulfshore collaborator Jeffrey Binder; The 39 Steps, the farce with four people playing dozens of roles; The Invisible Hand, a political thriller by Pulitzer-winner Ayad Akhtar, and another world premiere Another Revolution, Jacqueline Bircher’s political work set in a university in 1968. The coming season titles will range from classic Neil Simon Barefoot in the Park to 26 Miles by the acclaimed Quiara Alegría Hudes known for many works including In The Heights.

Becoming a League of Resident Theatres member is another validation. LORT theaters are some of the best-known regional theaters in the country, several of which have been the tryout homes for Broadway-bound works. That is a goal Gulfshore hopes to achieve as well in the larger stage. It is a similar situation with the Maltz Jupiter Theatre – already a LORT member – which hopes its new venue slated to open next month can be a launching pad for titles to be mounted across the country including New York City.

“By joining LORT, we are putting Naples on the map for professional theater. It is thrilling to join the pantheon of theatrical giants who have shaped the landscape of American theater for the last century, and … I am thrilled that Gulfshore Playhouse is playing its part in helping Naples blossom into a vibrant arts destination,” Coury wrote.

Usually, becoming a member of LORT signifies a high level of quality, budget, expertise and production values. Being named a LORT theater requires a months-long selection process and approval from the LORT Board of Directors and three of the major professional theatrical unions: Actors’ Equity Association, Stage Directors and Choreographers Society and United Scenic Artists. LORT membership is also based on weekly box office averages and seat capacity for the theater.

With its collective bargaining agreement, LORT requires a higher base salary. This matters because the southwest portion of the state, while home to a handful of professional theaters, does not have a large pool of talent living in the immediate area. A good portion of performers, designers and staffers are brought in from out of the region. The Radio Golf production last December imported the entire cast, director and much of the design team.

The confluence of public support and the company’s commitment seemingly has paid off.

“We went through a recession and we went through a hurricane. We’ve been put through our places for sure. And now a pandemic, of course. And what really happened in this last year is nothing short of magic,” Coury said.

For more information about the theater, visit https://www.gulfshoreplayhouse.org 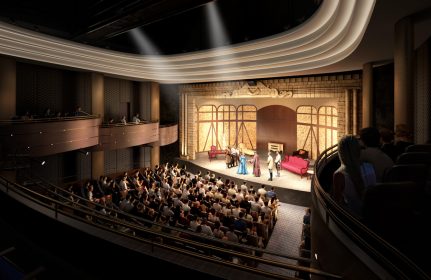 This entry was posted in News and tagged Gulfshore Playhouse, Kristen Coury, Naples. Bookmark the permalink.