Shattering is Just One Way to Describe The White Card 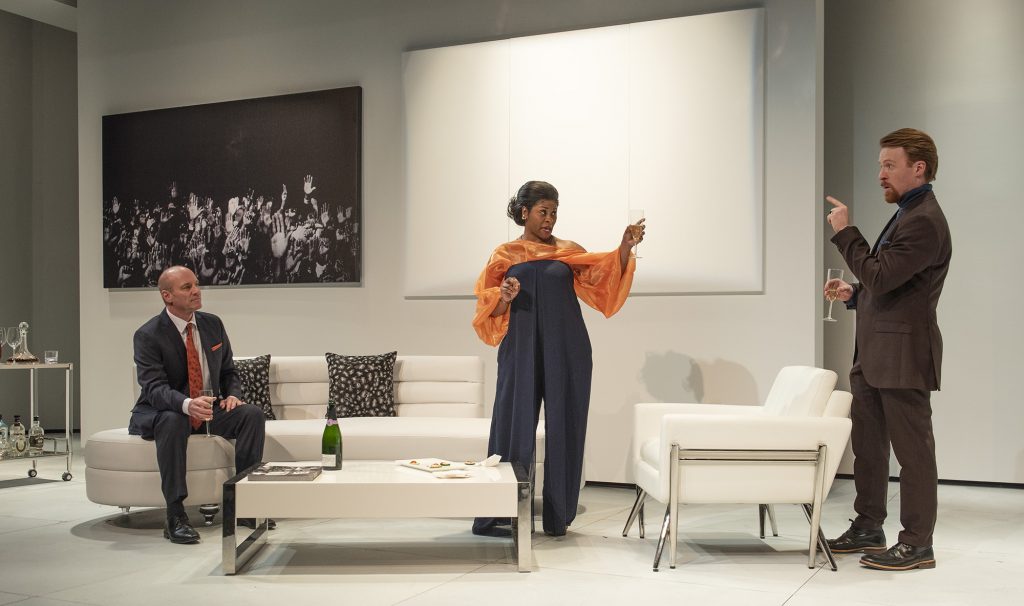 Adjectives lose their power through injudicious overuse. But they still may remain the most accurate way of capturing an experience. One solution, perhaps, is for the reader to stop, isolate the adjective and spend just an extra second just rolling the word around their consciousness to savor their precise meaning.

So try it. In the case of GableStage’s production of Claudia Rankine’s drama The White Card, try “shattering.”

And “scorching.” And “searing.”

And “difficult.” Yes, if you think of yourself as a white progressive committed to racial equity and justice as this critic considers himself, try “difficult.”

As the first published play by the acclaimed poet, The White Card starts off as a naturalistic drama delivered by an impeccable cast and skilled director Lydia Font. But it evolves quickly into a polemic, to the extent that the second act abandons any attempt at theatrical narrative and becomes an intense, dense and upsetting adult version of a dorm room debate. It has chosen a more direct path to ideological discourse than many other plays that cloak their socio-political message in a story.

And more than many plays, how you react and interpret what you hear and see here will vary wildly depending on how you view yourself and what you believe. You may champion what is being said, you may totally reject it, but you likely will come away angry – possibly for different reasons than those of the folks in the seats behind you.

The set up: It’s three months into the last president’s reign. Charles and Virginia Spencer, a wealthy white couple who are sincerely committed to achieving racial justice, have spent millions supporting the work of artists depicting the horrors of the violence against African-Americans. Their elegant all-white living room is dominated by oversized photographs and paintings of racial strife including Ferguson police cloaked in smoke bombs, plus a three-panel all-white Rauschenberg reminiscent of the Rothko-like piece in Yasmina Reza’s play Art.

They and their art dealer Eric have invited up-and-coming African-American art photographer Charlotte to a dinner party to discuss buying her newest round of work recreating scenes of past incidents of racial violence, somewhat resembling crime scene photographs.

For quite a while, they verbally dance with social niceties and glowing smiles as the Spencers try to woo Charlotte with professions of their past genuine activism for racial equality and their abhorrence of racist violence.

Charles explains the origin of his stance by citing a lynching that upset him in college: “ The only thing I could think to do was find a way to prevent the forgetting. I don’t want to contribute to the silence. Our silences. By showing work that exposes racism, I think I can keep our history in the forefront. Black deaths are a part of that history.”

But tension increases when their son, Alex, returns from another of his protest marches with Black Lives Matter colleagues. Alex angrily challenges the depth of his parents’ commitment and accuses them of hypocrisy for not doing more. He notes that a portion of Charles’ real estate money comes from building prisons primarily occupied by people of color. (He doesn’t acknowledge that he,too, has thrived because of that economic background). He does not spare Charlotte either; he notes to Charlotte, “You want your work supported by the very people you are critiquing.”

This sets off a contentious and defensive debate among a group of highly intelligent and articulate contenders. Everyone’s balance begins to erode. A family tragedy is revealed. The evening melts down as Charlotte contends that the Spencers’ very whiteness and privilege is a causal problem in itself; they should own blame for racism’s current existence regardless of their proactive steps to counter it. She contends that white privilege has blinded them to the profundity and depth of the causes and perpetuation of racism. This does not go down well with people who believe they have been supportive of civil rights and actively have taken steps to support it.

A year later, Charles visits Charlotte in her studio. Now, with the economic facet moot, they grapple with the issues with the proverbial gloves off. Guilt and blame are tossed about. Questions continue that were raised in the dinner party about what is art’s role in addressing social issues.

At least for this white bleeding heart critic, the most controversial clash is that Charles acknowledges that he is not perfect, but feels morally secure in having invested his time and money in promoting racial justice. Charlotte feels that such efforts are not good enough and do not absolve him. Simply as a privileged white man, he bears complicity in the very fact that racism persists.

This is upsetting not just to Charles, but likely to a large swath in the GableStage audience who also feel that they have supported civil rights and opposed racism in their own belief system or even in steps they have taken to effect change.

Charlotte – and Rankine in an introduction to the script – casually writes off white people of privilege fighting for civil rights as the White-Savior Industrial Complex. Quoting another author, Rankine writes such actions are “not about justice…. (They think) the world is nothing but a problem to be solved by enthusiasm.”

Rankine, a MacArthur Fellow and poetry professor at NYU, writes in the script about a real-life white man who offered to help her in the fight: “His question did the almost imperceptible work of positioning him outside the problems… while maintaining his position of superiority relative to me in his act of offering to help me. He would help answer not only my problems but those of all black people, which he only at that moment recognized but otherwise was not implicated in or touched by. He seemed oblivious to the realization that our problems as a society are dependent on his presence… the often-meaningless reparative largesse of whiteness in the face of human pain and suffering.”

It is precisely this point in the microscopic dissection of thought and its complex ramifications that will alienate many in the GableStage audience and strike them as literally making no sense, logically or tactically.

But it also forces them to re-examine their lives, how they are putting their convictions into effective action and what their role is in the complex calculus of race relations. The issues are worth an in-depth back and forth discussion that would require considerable time to even begin, but the company is holding a perfunctory 20-minute talk back after each show to start the conversation led by Katie Christie, a Miami audience engagement leader with Voices United.

Fort, a regional theater director and assistant professor at Emory University in Atlanta, provides solid staging that disappears in the emotional tumult and her molding of performances is faultless. You can debate the wisdom of her propelling this flash flood of ideas so fast that it is nearly impossible to devote proper time to absorbing them, let alone weigh their intellectual integrity on anything but an emotional visceral level.

The cast could not better. The always superb Rita Cole, a Carbonell winner for A Raisin in the Sun, is a marvel as she walks the fine line of a being a guest whose equanimity erodes as the conversation evolves but whose pain-fueled passion begins to flow out. Cole only did the role through March 6 because she had committed pre-Covid to Palm Beach Dramaworks’ Intimate Apparel for part of GableStage’s run. After that, the always impressive Lela Elam and equally fine has taken over, the return to a South Florida mainstage as Charlotte.

We saw both performances and it was instructive how two expert performers working with the same script and the same director and castmates can tweak the whole in a slightly different direction.

Cole in the first act was far more on guard and suspicious from early in the party and her arguments in the second act were a whirlwind.  Elam was far more an neutral genial observer in the first act, but her attacks on Charles – the same words — were more cogent and incisive.

Tom Wahl is a GableStage veteran with a Carbonell  win for I Am My Own Wife and a nomination for his protagonist with a secret agenda in White Man on the Bus with Cole his acting partner. He smoothly makes Charles a genuinely likable, intelligent and caring “good person” struggling to do the right thing – and running into a wall of tough truths from Charlotte that require him to re-evaluate just how altruistic his commitment may be.

Barbara Sloan’s Virginia is a classic well-meaning matron who is in sync with her husband’s social agenda, but isn’t quite as deep a true believer. Joshua Hernandez makes Alex the kind of young new convert who completely inhabits a cause, allowing no room for compassion of those who falter. Iain Batchelor plays the art dealer smoothly, having essayed it in a previous production.

Much of the production’s design team is local although not names associated with the troupe in the past. Frank J. Oliva’s set design speaks volumes about the characters who live and work in them, especially the Spencers’ ultra-elegant living-dining room with chic white leather furniture and enhanced by prop mistress Kacey Koploff’s accoutrements such as fine champagne glasses and dinnerware. The scenes are lit by Quanikqua “Q” Bryant and the character-perfect costumes were produced by Camilla Haith.

Many South Florida theaters have been making efforts to systematically address diversity in their work, most visibly in choosing titles, playwrights, directors and actors. But few have come as close to the naked attack on the issues as this production. By accident due to an Omicron-caused delay, opening night was appropriately the 10th anniversary of the shooting of Trayvon Martin.

Just a side note: GableStage under the leadership of its new Producing Artistic Director Bari Newport has committed to expanding its reach to a diverse community. Much of the material in the playbill is in both English and Spanish.

The White Card will not land well with some people. Yet inarguably, it is well worth its testing of your carefully constructed sense of self.

The White Card through March 27 from GableStage in the Biltmore Hotel, 1200 Anastasia Ave., Coral Gables. 2 p.m. Wednesday, Saturday and Sunday; 7 p.m. Thursday; 8 p.m. Friday and Saturday. Running time 1 hour 18 minutes with no intermission but a five-minute scene change. A 20-minute talk back follows each performance.  Tickets $40-$70. Call 305-445-1119 or visit gablestage.org/the-price

Covid Protocol: Face masks will be required for all guests, regardless of vaccination status. Before entering the theatre, all guests will need to present either a negative COVID -19 PCR or Antigen test result within 72 hours of the performance OR a full vaccination status card.