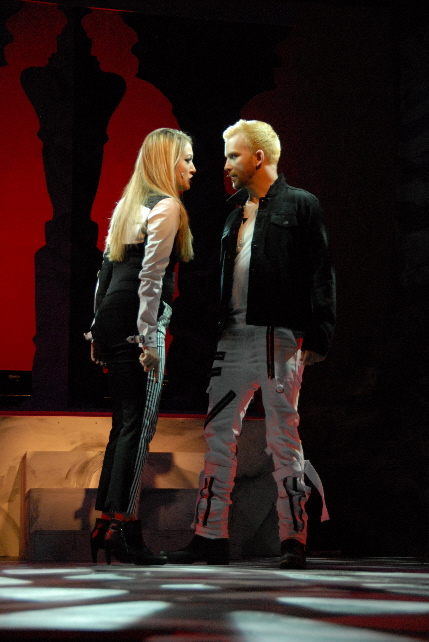 Boca-based Slow Burn Theatre Company plans to expand during its sixth season this fall by producing a second series of shows in connection with the Broward Center for the Performing Arts.

None of them would duplicate Slow Burn’s regular season performed at the West Boca Performing Arts Theatre and the Aventura Arts & Cultural Center. The fare also would be more mainstream than Slow Burn’s challenging musicals such as Side Show and next to normal.

But it would make Slow Burn the only major company in the region to produce work in all three counties during the same season.

Additionally, the theater plans to rent a renovated warehouse in Oakland Park to use as a rehearsal hall, scene building shop and costume shop for all of its productions and to rent it out to other companies beginning June 1, Fitzwater said.

The steps are major milestones for the company that has  built a strong reputation. The consistent quality of their large-scale productions has produced an enthusiastic word of mouth among audiences who regularly sell out productions they likely have never heard about or seen.

In the company’s first year of Carbonell Award eligibility, next to normal garnered more nominations than any other theater or production last month. Fitzwater went home with the best director statuette and the company’s rendition of the show’s finale at the award ceremony brought down the house.

The company has been fiscally cautious, only this season expanding to a three-week run of each show when the audience demand made its financially feasible. In fact, the expansion projects will be financed by the Broward Center. That will establish it as a producer of shows like the Arsht Center’s Theater Up Close in Miami, not just a presenting host or landlord to visiting companies.

The Broward Center has always sought out modestly scaled shows to put their smaller venues to good use, such as hosting the Laffing Matterz comedy troupe in the New River Room, Kratish said. “I saw enough of Slow Burn’s work to appreciate that (Fitzwater) was not only producing excellent work but I had enough conversations to know that he what it means to create a realistic budget and stick to it,” she said. “What we do is art and business. You have to have both sides.”

But the shows will be produced under the Slow Burn “brand name” and use its cadre of designers and staff, along with Equity and non-Equity performers familiar to Slow Burn fans, Fitzwater said.

The first show running eight weeks from Oct. 2 to Nov. 22 will be a dinner theater production of The Marvelous Wonderettes, a tongue-in-cheek musical revue built around girl groups of the 1950s and 1960s. The actors, Fitzwater assured, would not be serving the meals.

The Amaturo shows will be a little more adventurous, although they would only run for one week. Titles being contemplated include Jason Robert Brown’s Songs For a New World, Falsettos and Romance, Romance.

The planning comes as the theater is enjoying growth including mounting two shows this past season at the Aventura venue, which is managed by the Broward Center.

The warehouse space is meant to serve small companies throughout the region. The need, Fitzwater said, is illustrated by the fact that Slow Burn’s costumes are frequently made in its designer’s living room and Fitzwater cited a photo on Facebook of a co-director of another troupe painting scenery in her driveway.

Slow Burn also has announced its lineup for next season in West Boca:

The 1988 Broadway musical based on Stephen King’s novel about a high school misfit with telekinetic powers was legendary – as in one of the most stunning critical and box office flops in musical theater history. A book about theater disasters was entitled Not Since Carrie. And then something occurred almost unprecedented in the genre: Bootleg copies of the score circulated and found fans who banded together in their love for the music. A cult reputation grew exponentially. Finally, the authors reworked the piece for a limited run in New York in 2012 that was far better received. Now the work is being picked up around the country. Set in the present day, the new version features a book by Lawrence D. Cohen (screenwriter of the film version), music by Academy Award winner Michael Gore (Fame,  Terms of Endearment), and lyrics by Academy Award winner Dean Pitchford (Fame,  Footloose).

This musical about the Depression Era bank robbers comes from the prolific Frank Wildhorn (Jekyll & Hyde) and Don Black (Phantom of the Opera). The work was developed at the La Jolla Playhouse in 2009 and the Asolo Repertory Theatre in Sarasota in 2010 before moving to Broadway in 2011 starring up-and-comers Laura Osnes and Jeremy Jordan. It got middling reviews but developed enthusiastic support among audiences and received two Tony nominations.

An unknown show by an unknown composer.

The hilarious satirical musical by Howard Ashman and Alan Mencken is based on the cult film in which a schlub hero gains fame and romance while feeding blood and body parts to a plant from outer space.