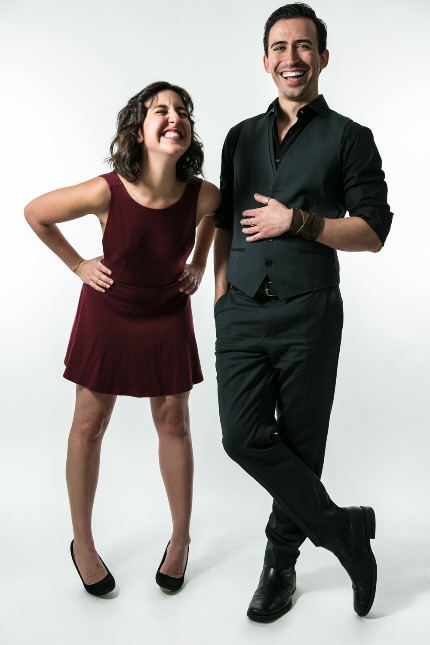 Brother and sister Natalie and JJ Caruncho will team new DreamCatcher Theatre with the Arsht series this all.

Miami-born siblings pursuing careers in New York have created a company whose first production will be Stephen Sondheim’s musical Into The Woods as part of the Arsht Center’s Theater Up Close series next season.

Sister and brother Natalie and JJ Caruncho are partnering with the Arsht, artistically and financially as co-producers, to mount a full production of the large-scale musical in January as the inaugural entry from their new troupe, DreamCatcher Theatre.

The number and frequency of expected future local productions will depend on the Carunchos’ availability as other assignments allow. But the company is designed as an open-ended operation that will employ both the Carunchos’ New York colleagues and local talent on an ad hoc basis.

Natalie wrote in an email Saturday night, “We are beyond thrilled that they are entrusting us with their support and a spot in their Theatre Up Close Season…. It is going to be an exciting adventure. The entire team has been incredibly supportive and encouraging. We couldn’t be happier to be starting our journey at the Arsht.”

For the Arsht’s Theater Up Close initiative, the undertaking marks another step in the facility’s efforts to encourage local companies and visiting troupes to provide more adventurous and stylistically challenging work in its black box Carnival Studio Theater space than is usually seen on its main stages, Executive Vice President Scott Shiller said Saturday.

Its fourth season lineup for 2014-2015 also includes a co-production with the University of Miami Department of Theatre Arts, another remounting of a show from the House Theatre of Chicago and Zoetic Stage’s fifth season.

The House Theatre, which brought in its acclaimed productions of The Sparrow and Death and Harry Houdini, will move in The Magnificents, another magic-themed original that bowed in Chicago in the winter of 2013. Written by Houdini’s illusionist Dennis Watkins, the show is described as “a conjurer’s tale about a showbiz family of magicians.”

UM’s collaboration of students and professionals will mount Peter and the Starcatcher, the quirky and extremely theatrical prequel riff on Peter Pan’s origins, very freely adapted from the novel by Dave Barry and Ridley Pearson.

But the headline is DreamCatcher’s co-production of Into The Woods, the Stephen Sondheim-James Lapine musical that mixes and matches fairy tales with an adult overlay about growth and loss. It is a daunting first step for DreamCatcher because of the difficulty of the material and the resources required when it is traditionally staged: at least 11 and sometimes 20 actors, a licensed score written for 16 musicians plus sophisticated sets and lighting.

Although the January offering is still being planned, the production is expected to use more actors and musicians than previously seen in the space, Shiller said. A director who has worked with the Carunchos will be announced soon and their vision for using the flexible black box space promises to be unique.

While the Arsht will contribute financially (it was the primary backer of its lavish disco-inflected Donkey Show in 2o12), the Carunchos told Shiller that they have a board of directors, donors and “investors” of their own.

On the company’s website, www.dreamcatchertheatre.com, the Carunchos state “Our acting company was founded with the hope of being an artist-driven company and of the deep belief that the stories we choose to tell, and how we choose to tell them, truly matter.”

Elsewhere, they wrote, “The idea was and remains to find stories worth telling and tell them. The focus will be the work. JJ talked about the great theatre companies of the past that were created by actors who spoke the same language and just wanted to be in a room with other actors. We hope to continue to find rooms to fill with visceral, engaging and magical storytelling experiences for audiences and for ourselves.”

The Carunchos developed the idea after sitting around in an apartment talking with fellow actors, most at a similar point in their careers: getting some jobs, but still trying to get a foothold in New York and nationally, Shiller said.

Natalie wrote in her email Saturday,” No one tells you when you are starting a career as an artist, an actor/ dancer/ singer/ musician that when you get to New York City your life can become a series of auditions and these gaps in between getting to do the work you set out to do. And, sometimes, having to do work that doesn’t necessarily feel like what JJ and I call ‘the goods.’ As artists, JJ and I both found that we have this yearning to surround ourselves with other like-minded artists and create opportunities to do the kind of work that we really believe in and got into ‘the business’ to do. We feel tremendously lucky to begin to realize this dream and are just so excited to get started.”

The catch, they told each other, was that they and their colleagues would have to commit to taking a few weeks off, out of New York City, to go somewhere where they could indulge their passion. The word passion made the Carunchos think of their hometown.

“My brother JJ and I had this idea to start creating our own work, and wanted to find a way to do it back home in Miami,” she wrote Saturday. “As we did our homework, we learned that the Arsht has a tradition of supporting new work and new companies and we just knew we wanted to take a leap and put ourselves out there.”

It dovetailed with the Arsht’s initiative to partner with and nurture fledgling or cutting edge companies.  Previously they have worked with Mad Cat Theatre for its reprise of Broadsword and Alliance Theatre Lab for a second production of Brothers Beckett. But Shiller said the Arsht had honed its skills in its highly successful partnership with Zoetic – providing assistance with budgeting, logistics and marketing, providing some funding as well as the Arsht’s facilities.

Natalie Caruncho is an actress/singer/dancer who performed as the understudy and in the ensemble of the first national tours of In The Heights and Flashdance, including the former’s appearances in Fort Lauderdale and Miami. In the latter, she also served as a dance captain and later became its associate choreographer. She is a 2004 graduate of the Gulliver Prep and received a BFA in Acting from Florida State University. She also has a blog, www.musingsofanartist.com/readthis. When she first got the tour job in 2009, she told the Miami Herald that she hoped someday to return home and create a community theater.

JJ Caruncho, a 2007 graduate of Palmetto High known as Joe when he was growing up, describes himself as a “singer/fighter/dreamer” and “storyteller.” He has trained in various kinds of music including opera, and specialties such as close quarter combat.
They were born and raised in Miami in a Cuban American household “surrounded by dancing and music and love,” Natalie wrote. Their mother, Gerri Barreras, is the dance director at Gulliver Prep. Their father, Joseph Caruncho Sr,,  is a trumpet player turned lawyer turned entrepreneur whose last project was Preferred Care Partners until they sold in 2012.

The entire Theater Up Close season is:

This is a co-production with the University of Miami’s Theatre Arts Department, which mounted Metamorphosis and The House of Bernarda Alba in past seasons. Starcatcher, a wry comedy with music, was a hit off-Broadway and on Broadway in 2011 through 2013. Rick Elice (The Addams Family) took major liberties with the novel by humorist Dave Barry and novelist Ridley Pearson. In this vision, a group of English music hall/panto actors recreate an origin story for Peter Pan that is wildly different from the James M. Barrie tale.  The New York version took five Tony Awards and was praised for its wildly theatrical and stylized staging, plus highly imaginative and inventive costumes, props and sets. As before, students and professionals will work together in most elements of the production both on stage and off.

Zoetic Stage mounts this bizarre, funny and incisive look at surburbia by Pulitzer finalist Lisa D’amour, which bowed at Steppenwolf Theatre Company in Chicago and moved off-Broadway. It’s an off-beat satire about a typical couple whose life is upended when a free-spirited couple moves in next door. The usual rites such as backyard barbeques reveal surprising character differences.

DreamCatcher’s production of the Stephen Sondheim/James Lapine musical takes several of the Grimm Brothers’ characters (Cinderella, Red Riding Hood, Jack and the Beanstalk, Rapunzel), plus a few new ones and mixes them into one story that speaks to a wide range of topics including the relations of parents and children, what being an adult really means, is the reality of achieving your dreams as good as what you hope for, and a dozen other themes. Features one the best scores and most intelligent lyrics in musical theater.

Zoetic produces this script by screenwriter/director Paul Weitz (American Pie) about “the success story of Harry, an unassuming yet savvy guy who has become an overnight Internet millionaire with all the lavish trimmings. But beneath Harry’s affable and affluent surface lies dissatisfaction, both with his success and his sexless marriage to an equally unhappy artist. All that begins to change, however, when an impulse sends him to an S&M club, bringing together two lost souls while setting off a chain of events that leaves Harry questioning everything he knows about love, power and…control.” This dark comedy played off-Broadway in 2010 and starred Zach Braff who wrote Zoetic’s All New People – which just won a Carbonell for best ensemble.

The House Theatre of Chicago follows up on the local hit Death and Harry Houdini, with another show written by and starring third-generation magician Dennis Watkins. It is described as “an extraordinary family that brings magical entertainment to adoring audiences. As their glory and popularity begin to fade, the aging star of the show takes a young boy under his wing and teaches him all his tricks – and much more. This story of the legacy we can leave before we let go is told in spectacular style, with aerial circus arts, film components and feats of magic – including Watkins vanishing before the audience’s eyes”

Subscriptions can be purchased through the Arsht box office by calling (305) 949-6722, or online at www.arshtcenter.org. Single tickets will be available starting this summer.