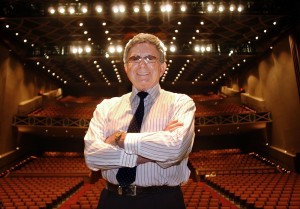 Buffman, one of the last theatrical impresarios, virtually created Florida’s touring circuit and helped evolve the forerunners of Broadway Across America. He developed shows in South Florida venues and then sent them out on the road and even to Broadway.

Most recently, Buffman spent eight years as president and CEO of the RiverPark Center of Performing Arts in Owensboro, Kentucky.

He lists his involvement as producer in 40 shows includes the Broadway productions of Joseph and The Amazing Technicolor Dreamcoat, Elizabeth Taylor in The Little Foxes, and revivals of Oklahoma, West Side Story, Brigadoon and Peter Pan.

This entry was posted in News and tagged Ruth Eckerd Hall, Zev Buffman. Bookmark the permalink.