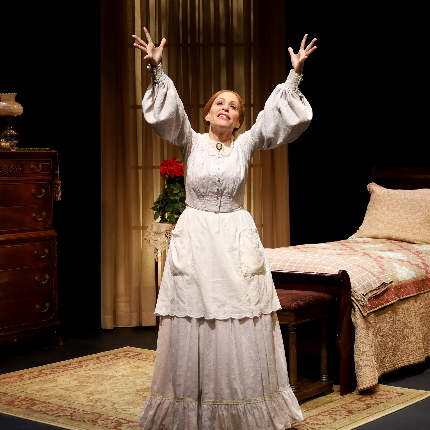 It almost hurt. The reminder of the loss of the past year, the palpable yearning for experiencing live theater alongside a couple hundred people.

The unintentional ache washed throughout the superb evocation of the soul of Emily Dickinson in The Belle of Amherst in the video co-production from Palm Beach Dramaworks and Actors’ Playhouse.

But the unfulfilled longing for Live Theater was not why the event available this Friday through Tuesday was so effective. The artistry not only would succeed on stage in front of an audience. The filming of two live performances landed solidly with viewers on a large TV screen with no excuses needed, much more effectively than many other similar efforts.

With a career benchmark performance by Margery Lowe sculpted by William Hayes, this one-woman play delivered a far more multi-faceted and thoroughly engaging portrait than that of the fragile, naïve, hermit with little social experience perpetuated through much of the last century.

This Dickinson brims with life, making wry comments about neighbors who see her as the town eccentric, relating her early experience as a pithy rebel, demonstrating her peace with choices she has made to seclude herself in her home, limning her passionate love of words, and depicting her visceral need to express herself in poetry as some people need oxygen to breathe.

Lowe, an actress of long-proven wide and deep range, seemed born to inhabit and resurrect from the dead the spirit of this far-more-complicated poet than you recall from high school American Lit class

When Lowe’s Dickinson genially chats with us as surprise visitors, words from her poems and letters flow smoothly as if everyone spoke in unequaled phraseology in everyday conversation. Lowe savors the very sound of a procession of consonants and vowels inside words that catch her fancy.

Hayes, Dramaworks’ producing artistic director at Dramaworks with input from Actors’ Playhouse’s David Arisco,  guides the tone morphing by millimeters over the evening. Early on, Dickinson is the welcoming entertaining host sharing a cake recipe. By the end, she has revealed soul-crippling incidents such as a mentor’s life-changing rejection of her work to the profound love for a pastor expressed in correspondence but realized only in two face-to-face meetings.

Sustaining Dickinson’s homeostasis is her sheer joy in her life as someone who can and must express her observations on everything from her neighbors to, most famously, coping with death.

She says without asking for a shred of sympathy that she is like a bird she found grounded in her garden. On the floor, she mimes asking the bird, “Why sing when nobody hears?” Speaking for both of them, she proclaims, “My business is to sing!”

Earlier, suddenly fascinated when she uses the word “phosphorescence” in describing an acquaintance to us, she impulsively rips a strip out of a newspaper to write down poetic phrases indicative of the word.

While the concepts of death, mortality and immortality are only fleetingly acknowledged in the first half before forming the core of the second, she insists, “The poet lights lamps (that) themselves go out, but the light goes on and on…. If I can ease one life aching or cool one pain or help one fainting robin, I shall not have lived in vain.”

The challenge in this play is the limitations of one performer and one voice carrying the audience for more than two hours. Fortunately, Lowe, Hayes and their lighting designer Kirk Bookman imbued the evening with a wide range of emotional states and tones.

Dickinson/Lowe’s body language was especially instrumental: She rarely stood stock still. Her arms in triple-draped sleeves were usually in motion, shooting out and up for emphasis; her head cocked at more angles than you might think possible. Her facial expressions were amplified by a wide, thin mouth that exposed a warm smile of playfulness one moment, then curled into a dry riposte, then descended into a pained frown.

Hayes’ stage direction was exemplary and he was deeply involved in the video production of a three-camera shoot of two live performances in an empty theater by Ko-Mar Productions, a West Palm Beach firm. His finished product shows deft composition inside the camera, knowing when to cut to a different angle, and smoothly but unobtrusively following Dickinson as she moves around the set. He has Lowe/Dickinson talk directly to an array of non-existent audience members seemingly spread through the auditorium.

This production does not scrimp in any way, from Brian O’Keefe’s layered costuming, Roger Arnold’s soundscape, and Michael Amico’s fine-grained recreation of Dickinson’s home highlighted by period furniture and brick a brac.

But the masterwork was Bookman’s lighting that subtly transported viewers to different places, moods, time of day, changing seasons, magically allowing Dickinson to take us back and forth in time.

This production contains two seeds of a potential post-pandemic paradigm for South Florida theater. First, there have been a handful of co-productions in this part of the state before (Dramaworks’s Ordinary Americans with GableStage a year ago). But with smaller budgets, the idea of a sharing expenses and moving the production to a different county may become more common.

Second, Hayes has been urging his colleagues around the country to develop a joint system, when shows are staged live in front of audiences again, in which the production is professionally filmed, skillfully edited and proactively marketed across the country online to paying patrons as a second revenue stream, much as the Stratford Festival in Canada and the National Theatre in Great Britain have been doing for many years.

In that vein, this production of The Belle of Amherst provides a long visit with a masterful storyteller—both the poet and the production.

The Belle of Amherst is available to download for a single livestream at the patron’s convenience April 2-6 from Palm Beach Dramaworks and Actors’ Playhouse. Subscribers to either company’s 2020-21 season who did not request a refund have free one-time access.  Others can buy access for $30. For technical reasons, tickets can be purchased only through PBD’s website: www.palmbeachdramaworks.org or box office: 561.514.4042, ext. 2