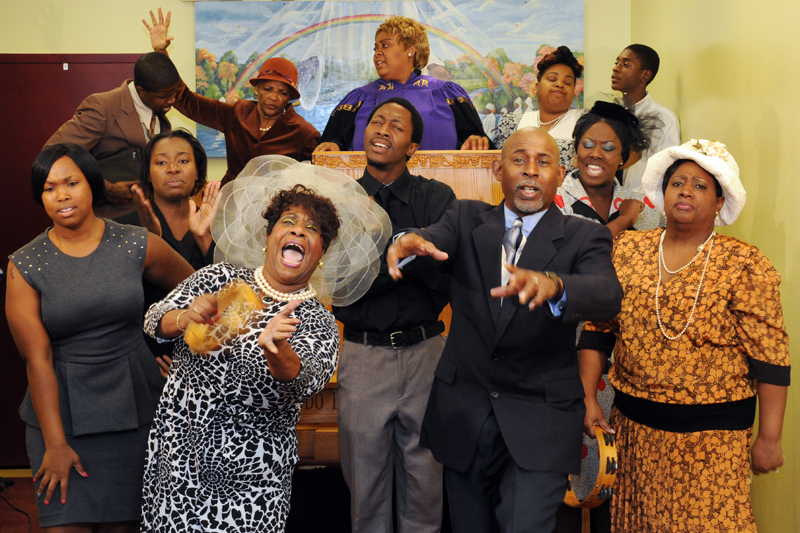 If absolute devotion to God is the highest calling of Mankind, James Baldwin’s The Amen Corner asks if that level of sacrifice is ultimately righteous if it means destroying your life and those of the people around you.

Set in the crucible of a storefront Pentecostal church in Harlem during the 1950s, Baldwin’s play digs deep into the relationship of faith and organized religion, highlighted in the current production by African American Performing Arts Theatre Company in Liberty City.

For instance, when does the pursuit of a holy life become infected with overweening pride and hypocrisy? Does committing to a sacred life also mean rejecting living a fully-realized existence in a flawed world of imperfect human beings? When does religion becomes less a balm and more a way of evading dealing with our problems and failings?

AAPACT’S ambitious undertaking is an earnest and heartfelt production laced with chuckles and tears under director Teddy Harrell Jr.’s leadership. But it’s a mixed bag: Most of the time, the characters and their tragic spiral simply don’t feel genuine or organic. These are actors acting, not being.

But every 20 minutes or so in this 2 ½-hour evening, the actors dig into their marrow and slingshot the play from pedestrian performances into an affecting truth that clutches the audience’s heart.

For instance, the second act opens with grief-stricken young mother Ida Jackson (played by Sarah Gracel Anderson), whose infant has died painfully in the hospital. She is seeking a shred of comprehension of the incomprehensible from preacher Sister Margaret (Brandiss Seward). When she asks what the infant could have done to deserve this fate from God, Margaret says Ida needs to bow her head to God’s unknowable plan. Already bent over on her knees, Ida wails that she prayed with her head bowed at the child’s bedside for days. The depth of feeling resonates with anyone who has struggled to reconcile personal tragedy with the idea of a merciful and just deity.

It’s the cast’s fearless work in such passages and AAPACT’s clear commitment to serious African American work that redeem its flaws.

Baldwin based this nuanced script on his own years as a teenage preacher in his father’s church and it reflects his complex, evolving view of how human beings imperfectly reach for God’s grace.

He opens it with a roof-raising sermon by pastor Margaret who is a passionate evangelist obsessed with saving souls. Like several of her congregants, Margaret may be good-hearted but she has become rigidly judgmental in her interpretation of the Gospel to the point of admonishing one parishioner that it’s immoral for the teamster to drive his truck if it’s transporting a load of liquor.

That’s fine with the aging and unbending Sister Moore (the always wonderful Carolyn Johnson) but quietly aggravates the truck driver and his wife — pillars of the church Brother and Sister Boxer (Lamar Hodges and Regina Hodges).  Margaret’s blood sister, Odessa (Janet “Toni” Mason) supports her sibling although she’s more understanding of human frailty, especially how Margaret’s son David (Jeffrey Cason Jr.) is straining at his mother’s straightjacket demands when his heart is in becoming a jazz musician.

But Margaret’s carefully ordered homeostasis is upended with the reappearance of her husband Luke (Andre L. Gainey), a musician who she claimed had run out on her 10 years ago. Luke, who wants to reconnect with his son and Margaret before he dies of tuberculosis, forces Margaret to reveal the truth: She left Luke. She explains to David and the church elders that his drunken, profligate ways were more than she could bear after she turned to God in the wake of the death of another child.

But her deception and weakness feed the jealousy and hypocrisy brooding inside her parishioners who secretly resented Margaret’s blatant pride in living a holy life. Over three acts, Margaret’s life, her relationships and her position as pastor all erode. It becomes clear that she has hidden her pains and shortcomings inside religion.

Her loss teaches her humility and that true religion means, as she says later, “To love the Lord is to love all His children—all of them, everyone!—and suffer with them and rejoice with them and never count the cost!’’

The title makes this sound like a run of the mill gospel music revue with, as the review of a Minneapolis revival noted, a kind of Tyler Perry vibe. In fact, it is laced with music and was turned into a musical in 1983. But the real music lies in Baldwin’s dialogue, a sublime mixture of inner-city-speak, gospel-tinged pronouncements and a philosophical poetry that underscores the inner beauty of humanity. The cast’s ability to embrace and deliver the varying rhythms is one of their strengths.

The performances here are not especially subtle or complex – fortunately Baldwin’s script inserts those assets. But they are sincere and exude a restrained passion. These qualities are especially evident in Seward’s portrayal of Margaret, who doesn’t shy away from creating an admirable altruist undercut like Hamlet by a fatal flaw, in Margaret’s case that pride born out of her complete and utter sacrifice of anything that doesn’t link directly to unquestioningly serving the Lord. Seward kicks out the jams in her sermons and her pronouncements with a throaty voice that we fear may not survive the entire AAPACT run. Her body language changes during the arc of the play from limbs flying in the air during the gospel music numbers to a beaten hunched over trudge up the stairs when she realizes her life is disintegrating.

But the finest, most consistent and believable performance comes from Carolyn Johnson as the obnoxiously self-righteous proudly-proclaimed virgin who slyly positions herself to bring down Margaret. Without ever slipping into caricature, Johnson simply inhabits her villain. Johnson has been one of the region’s best actresses, especially when she has a good director. Theatergoers with good memories recall her harrowing portrayal of a drug-addicted grandmother in the Public Theatre’s 2006 production of Lynn Nottage’s Fabulation. Someone needs to find more roles for this talent.

There’s solid support, too, from Mason as the loyal sister and Anderson, who needs to be speak up a bit more, but who is heart-wrenching in her two scenes as the troubled mother. Gainey is a genial, winning actor, but he really only gives Luke a single note of benign and abiding affection.  Cason is convincing as a dutiful, devout son chafing at his mother’s demands. The father-son scene between Cason and Gainey, fraught with yearning for connections despite a sense of estrangement, is another of those slice into the gut moments.

Harrell keeps the show moving, even though it’s a long haul. He and the cast inject dozens of grace notes like the impromptu shouts and hand motions during the church service. There comes a time when Margaret is telling a story about her father as if no one has ever heard it a dozen times before, and Odessa stands behind her out of sight, gently mocking her by silently mouthing their father’s words.

The Amen Corner was the first of only two plays written by Baldwin, the novelist and essayist whose works from the 1950s through the 1970s were groundbreaking and multi-leveled explorations of race relations and homosexuality. This play was produced at Howard University in 1955, and later on Broadway in 1965 after the success of his later play Blues For Mr. Charlie.

AAPACT is a small, meagerly-funded company that has been serving the community since 2001, most recently performing LeRoi Jones’ Dutchman. It’s passion is evident from the fact that it put 14 actors on the stage and three sets. An especially encouraging sign was that Sunday’s matinee so well-attended by an ethnically and age-diverse audience that AAPACT had to add extra chairs.