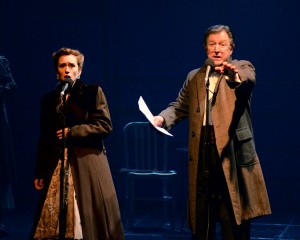 In this world of HDTV with HDMI inputs, digitized MP3s and IMAX films in 3D, the idea of a radio play might sound like a quaint throwback, especially when offered as part of the Broadway Across America-Fort Lauderdale series, which leans toward stage spectacle.

But there’s the canny germ of an idea in producer Zev Buffman’s pet project to fuse radio, theater and modern technology into a hybrid exemplified in his latest production, Agatha Christie’s The BBC Murders at the Parker Playhouse. The end result is undeniably entertaining in a quiet smile kind of way, although this is clearly an early foray into this genre and, arguably, not the most enthralling material to do it with.

Buffman unearthed four “lost” scripts that the queen of mysteries wrote for the BBC just before and just after World War II, including a Hercule Poirot story and the forerunner to her famous full stage play, The Mousetrap.  Using these as raw material, the Florida and Broadway impresario hired Judith Walcutt and her husband David Ossman of the Firesign Theatre to adapt them to Buffman’s evolving vision of radio theater.

The key was to augment the works with a three-dimensional theater aesthetic and high-tech production values. To highlight those qualities, the creative team starts out with classic radio sound effects by two Foley artists slamming doors and clinking classes as actors tethered to a line of stand-up microphones perform from typescripts. But as the evening continues, the audience becomes more aware of stage-high projections for settings, an increasing number of props and costumes, actors dropping their scripts and moving away from the microphones to interact and finally a quality of sound effects on state of the art equipment that are brilliantly engineered.

To bring a unity to the evening, the playwrights provide a live hostess knowledgeable about each play’s origins to narrate connective tissue, a genial matron with a mischievous twinkle in her eye, Dame Agatha herself.

The other piece of the puzzle was hiring a terrific troupe of actors, young and old, with glorious voices to play a wide range of roles like a repertory company, folks like Gary Sandy, am experienced stage actor best known for TV’s WKRP in Cincinnati; Phil Proctor, a co-founder with Ossman of the counterculture comedy group Firesign Theater; and the lovely Amy Walker who has a lead role in every play and a different accent for each. (Check out her 21 accents in 2 minutes You Tube video, click here)

Mystery lovers will appreciate any “new” works by Christie. But other than the Poirot piece, they are more reminiscent of the macabre O. Henry-like tales from the Alfred Hitchcock television series than the intricate and ingenious puzzles of Miss Marple. Unlike Christie’s baffling whodunits, the audience is way ahead of the characters here in figuring out what’s going on. One wise choice by Walcutt and Ossman was to play on that knowledge with an occasional nudge in the ribs as the nooses tighten.

Butter In A Lordly Dish is a revenge tale involving a callous prosecutor. In Three Blind Mice, strangers are locked in a snowbound hotel with a murderer. Personal Call  depicts a widower seemingly being phoned by his dead wife. Yellow Iris finds Poirot called to a jazzy nightclub to try to prevent a murder by solving an earlier one.

Walcutt and Ossman had to do a fair amount of adaptation creating a script that would “work.” Christie always felt restricted by the BBC’s 36-minute format and often used radio plays as test sketches for longer, more satisfying works. In fact, Three Blind Mice is the foundation for her The Mousetrap, still playing in London as the longest-running production in English-speaking theater. But the time constraints on these specific pieces make them seem simultaneously a shade thin for one of the master plotters of all time and yet, figure this out, padded. In other words, the historical value of these works is significant, but likely there are more dramatic and solid Christie works out there for this project.

The entire event has a delightfully tongue-in-cheek feel. Among the droll conceits is when the initial announcer asks the audience to stand and sing “God Save The Queen” (the lyrics are in the program and the tune is “My Country ‘Tis Of Thee.”) The production also pokes gentle fun at the old technology. Frequently, moments seem written in to take advantage of and spotlight the hand-crafted sound effects. A lot of doors open, a lot of drinks get poured. Characters clomp along on skis and tromp through gravel driveways.

As fascinating as it is watching Tony Brewer and Lauren Allison create these effects all night with stunning precision, it’s the overall sound design by Steven Wiese that is breathtaking, executed by Randy Thorn and Dennis Leonard. The fluttering of turning book pages is not simply audible through the large Parker auditorium but crystalline in quality. While everything and every word can be heard (thick accents notwithstanding), it doesn’t feel like someone simply boosted the volume, which is often producers’ solution for South Florida’s aging audience. At the other end of the scale are overwhelming sounds like a train pulling into a station. It doesn’t simply move across on-stage speakers like a 1950’s stereo demo record; it takes a 360-degree turn around the entire auditorium. There’s also a subtlety to the recordings themselves that defies description but makes them amazingly lifelike.

But the technology doesn’t overshadow the acting. This production directed by Walcutt and Ossman is blessed with a cast filled with unusually expressive and full-bodied voices that are musical instruments capable of a range of impeccable accents. Walker in particular has a plummy Downton Abbey sound when required or a soft Irish lilt. Surprisingly, while there must a melodramatic tinge to the proceedings , the style never seems over the top or out of place. Honor is due to Sandy, Proctor, Walker, Alex Jorth, Orson Ossman, Christopher Swan, Cassie Post, Richard Fish, Lesley Staples, local veterans Angie Radosh and Elizabeth Dimon, and Melinda Peterson as Agatha.

The Poirot tale is supplemented by dead-on period cabaret pieces performed live like the wry love duet “You’re The Thorn In My Side,” written by Rupert Holmes, the Broadway composer of The Mystery of Edwin Drood! and a writer of mysteries himself. While they are fine on their own merits and inject a little variety to the radio play concept, they add very little to the plot and even delay the drive of the piece.

Walcutt and Ossman directed the piece with input from Buffman, an old-style hands-on producer. They obviously know the radio genre and have elicited fine performances from their company. But the pacing can drag a bit, especially in the Agatha interludes.

If The BBC Murders is not riveting suspense or confounding mystery, it’s quite well done, intriguing and perhaps a peek back to the future of theater.
Agatha Christie’s The BBC Murders runs through Feb. 3 at the Parker Playhouse, 707 Northeast 8th Street, Fort Lauderdale. Performances are 8 p.m. Tuesday-Saturday, and 2 p.m. Wednesday, Saturday and Sunday. Tickets are $26.50 – $66.50. For tickets and information, call 954-462-0222 or visit www.parkerplayhouse.com.

To read a previous feature about Buffman and the production, click here.

This entry was posted in Performances, Reviews and tagged Broadway Across America, Parker Playhouse, Zev Buffman. Bookmark the permalink.