Alliance’s Aliens Is Alienating, But For Those Who Embrace It, It’s New Theater at Its Best 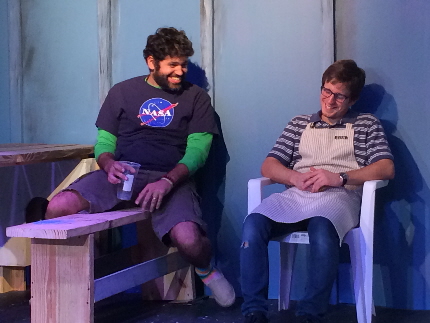 Evan hates America, Jasper loves poet/novelist Charles Bukowski – he’s writing a Bukowski-esque book and will be famous for it one day, and college dropout KJ likes to make a ‘shroom tea that he sips on from morning until night. These are the characters that inhabit Annie Baker’s The Aliens now at Barry University’s Pelican Theater and staged by The Alliance Theatre.

Director Adalberto “Albert” J. Acevedo (Juan Carlos Besares is credited as assistant director) have assembled a solid cast including Carlos Alayeto as KJ, Daniel Gil as Jasper, and Kristian Bikic as Evan. It took the trio a bit to get the momentum going at Friday night’s “gala” opening night, but Baker’s script isn’t easy stuff.

At 34, Baker is currently playwright du jour. She won a Pulitzer last year for her play The Flick and has a number of other playwrighting awards under her belt. The Aliens was first produced off-Broadway in 2010.

For those among us who enjoy going deeper than what’s presented on the surface (what Baker wants us to do in The Aliens) – the navel gazing and self-conscious loathing of Samuel Beckett and the existential leanings of Edward Albee – Baker’s pace will be a treat. For others, Baker’s The Aliens will be an exercise in head scratching and perplexed moments in the space of two hours of wtf?

The playwright’s note in the text of The Aliens calls for at least one third of the play to be silent – “uncomfortably so.” It’s a purposeful act by Baker to go out of her way to create this uneasiness. The beauty is when the actors and director have embraced it – going about the business of “being” in the long silences, while an audience member here or there will stew in this complexity

Embrace it, and it’s sheer theater magic; resist it and it’s a few hours akin to watching paint dry. Baker herself, who has received much notice for the elongated silences, says that the technique works to make the audience become aware of itself, then they adjust to it, then they eventually find their way back into what she calls “the reality of the play.”

The Aliens asks a lot of its audience and of its actors, too. There’s no denying that. In Alliance Theater’s production, the envelope could’ve been pushed further to guide the audience in cutting through the confusion and wrap their heads around Baker’s genius.

The play is set behind a Vermont coffee café. This isn’t a Starbucks, but a New England-y one off. There’s an outdoor break area that’s only to be used by employees. KJ and Jasper have become squatters making it their daily meeting place –a backyard commune and hideout from the world where the lost boys reminiscence about the rock bands they were going to form, dream of canvassing the U.S., past and present heartbreaks, Jasper’s New Age mother, and KJ’s bipolar breakdowns.

KJ and Jasper may be slackers, but they live life, even if it’s in their own microsomal way. They influence Evan, the nerdy coffee-shop employee, to the point where he becomes empowered enough to realize his mother makes him miserable when she asks him what vegetable he wants for dinner, and musters the courage to call the violist who he met at Jewish music camp.

The play gets its title from a Charles Bukowski poem, The Aliens, and also the name of the band that KJ and Jasper wanted to form. They had other names, but could never settle on one − their philosophy is that it isn’t a band unless it has a name. It’s indicative of how the pair thinks and their common ground.

Life goes on day after day behind the coffee shop. KJ shows up with his paper cup filled with his homemade concoction of “tea,” Jasper brings along his guitar and prophesizes atop a picnic bench to read his prose (the novel writing is descriptive and wonderful and shows Baker’s amazing talent beyond playwriting), Evan brings out bags of daily trash and gets ready for the next chapter of his life, which in the present future includes teaching kids music at a summer Jewish camp, before he heads into his senior year of high school.

Depending on interpretation, the time that’s “wasted” could be a metaphor for the wasted lives of the thirtysomethings KJ and Jasper. Evan becomes the beacon of light who has received hope for his future from the duos’ musings and, not for lack of effort, but for the state of affairs. There are probably many KJs and Jaspers in the 21st century, where the world isn’t offering a silver spoon to a college dropout with a history of mental illness and another who didn’t graduate from high school.

The Alliance Theater (previously Alliance Theater Lab, but they’ve dropped Lab from its name) and especially Acevedo deserve a big “A” for aspiration. Baker’s play is a challenging one. While the directing and acting work in so many aspects (save for the aforementioned “push the envelope, guys, and go for it!”), the set, stage direction and lighting detract from the performances.

Blackout scenes are a jolt that serve to take the audience out of the reality each time they happen. There’s stage noise with actors moving to different places, props shuffled around, and the like. Then when lights come up, there needs to be a few minutes into each scene for us to settle back in. They aren’t smooth transitions, to say the least.

The lighting design by Alekzander Sayers and Dominic Smith doesn’t aid in the passage of time or signaling the time of day. At one point, KJ is looking into what should be a bright, burning daytime sun, but the lighting puts us at dusk. The design, however, does work magic depicting a July Fourth fireworks scene.
Juan Carlos Besares’s and Jose Besares’s sound design and engineering is smooth with fireworks and summertime crickets chirping. Allison O’Neil’s costumes (she’s also credited as dramaturg) are perfectly slacker-fied, with a hint of Urban Outfitters, especially KJ’s T-shirts of a record turntable and another one that’s defined by a NASA logo.

In the acting department, Alayeto renders KJ, with his manly overgrown beard, dichotomous with his childlike ways. He’s often absurd, especially in the midst of his ‘shroom brain, comfortably moving around on the floor just inches from audience members’ feet. Alayeto’s character is the one mostly burdened with Baker’s silences and he stays in the moment creating the needed focus to make these long pauses work. Gil’s Jasper is the quintessential dreamer and resident philosopher. The likeability that Gil has infused into the character creates a well of compassion when a surprise is revealed about Jasper toward the end of the play. Bikic’s “golly, gee whiz” approach to the naïve Evan serves to present a sharp contrast to the other characters and it’s a perfect choice. Evan is the one with most defined evolution and Bikic moves through the paces evenly.

The Aliens is all about individuality and, while there are a few places where this production could be kicked up a notch to realize its full potential, the beauty is in The Alliance Theater’s understanding of the playwright and her script − not easy on many levels.

Applause to thought-provoking and challenging theater. It’s like Bukowski said: “An intellectual says a simple thing in a hard way. An artist says a hard thing in a simple way.” (Notes of a Dirty Old Man, 1969) Amazingly, playwright Baker and this production of The Aliens achieves both.