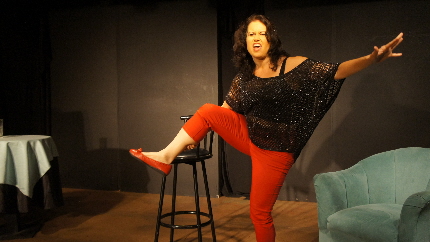 Act 1 takes on Eve Ensler’s overly produced The Vagina Monologues, but ALA makes it fresh by presenting it as The Vagina Monologue. Usually performed with a three-person cast, director Larry Bauman strips it down to feature one actress, the way Ensler originally presented her diatribe on female genitalia.

Actress Valerie Heller is fearless, delivering with gusto Ensler’s musings on everything from comparing the vagina to the Bermuda Triangle (“Nobody ever reports back from there”) to a poster board presentation of what women would dress their vaginas in if they could: “a pink boa, tuxedo, and diamonds, or course, since they are a girl’s best friend,” says Heller as she flips through the drawings of the female anatomy adorned with glitter and feathers.

The simple staging includes the poster board and stand, utilized to announce the different segues of each section from Hair to My Angry Vagina. A powder blue chair at stage right adds the only dash of color besides the actress’s bright red pants, which match the display of roses in a vase – another splash of color. Heller displays her background in dance training to bust a few moves in an early scene where she’s visually portraying what it is like when women want to take a peek down there. (“You’ve got to get in the perfect position, with the perfect light, which then is shadowed somehow by the mirror and the angle you’re at.”)

Having seen The Vagina Monologues done more than a few times (I was even in it once myself in Scranton, Pa.), Heller’s ability to make the words sound as if she wrote them, and Bauman’s direction, plus some nips and tucks here and there of the script (My Vagina Was My Village has been extracted, which is the story about the rape of a Bosnian refugee). A couple of slight touches, including a joke that the actress inserted about joke that she said her mother always told, and the historical origin of the “c” word, make a personal difference, too. ALA’s conception and Heller’s delivery make this more of a performance art piece than scripted dialogue. The result is something fun, light and airy, perfect for the intimate warehouse garage of the studio.

Act II, Save Me a Place At Forest Lawn, is pleasant, yet skews more toward something that would be staged for community theater or an amateur play fest.  Kitt Marsh and Elizabeth Garrard. as two old friends who meet for lunch at a cafeteria. certainly make the most of Lorees Yerby’s geriatric buddy comedy that’s full of musings about aging and dying alone.

Yerby’s one act does have its moments, especially when characters Gertrude (Marsh) and Clara (Gerrard) volley emotions back and forth. In the beginning of the script, Gertrude is suffering anxiety about realizing the end of her life as Clara assuages her fears. The roles reverse later in the play as Clara begins to suffer the same nervousness.

Marsh is the more believable senior citizen and has a number of fine moments as Gertrude that garner heartfelt sympathy. Gerrard’s Clara is drawn as more of an “old lady” caricature. Perhaps if both played the parts as caricature, or the pair was able to embody the genuineness of aging equally, there would be more reason for the audience to emotionally invest in the characters.

Still, there are tender moments that evoke compassion and serves as a catalyst for questioning one’s own life choices and mortality.

With its Evening of 1-Acts, ALA presents enjoyable morsels of theater. It’s bite-sized theater in a comfortable setting.

This entry was posted in Performances, Reviews and tagged Andrews Living Arts, Kitt Marsh, The Vagina Monologues. Bookmark the permalink.