Another Shade of Red at the Maltz Jupiter Theatre 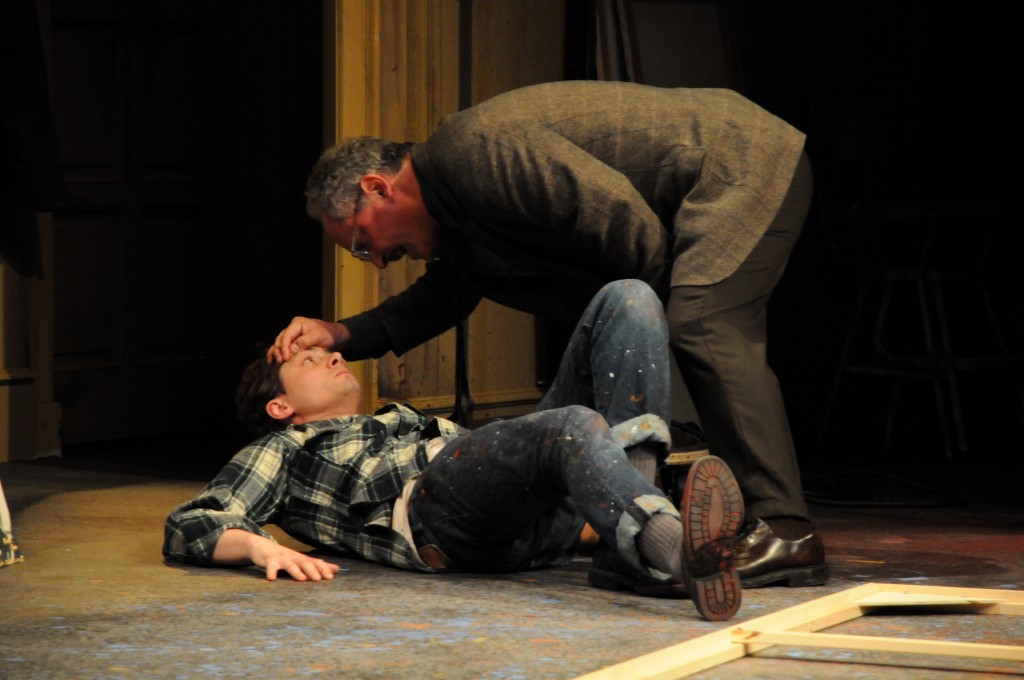 In music, they call it a standard: a song so inherently strong in its construction, so pure in its simplicity, so universal in its accessibility, that it can be interpreted and reinterpreted in an endless procession of diverse prisms called Sinatra or Coltrane or Etta James.

In classic theater, it’s Hamlet. And at the risk of elevating it too highly, in contemporary drama, I’m beginning to think it’s Red.

John Logan’s illumination of art and artists now at the Maltz Jupiter Theatre is so insanely popular (50 productions licensed this season across the country; six in Florida) that snobs are beginning to sneer that anything that ubiquitous can’t be really good.

But having seen three editions, including this strong, thought-stimulating production at the Maltz, whets the appetite to collect versions of Red, seeing how this director or that actor find different colors to emphasize in Logan’s play. None of the three productions resemble the other except in the broadest strokes. Comparing last fall’s edition by GableStage’s to the Asolo Rep’s later this spring would be like comparing Astaire and Feinstein’s spin on “The Way You Look Tonight.”

Ideas, philosophies and debates may explode profligately from Logan’s script, but they are driven by an emotional energy that gushes out over the Maltz stage like bright red paint spewing out of burst water main, to mix a few metaphors.

The plot of the drama (no, folks sitting next to us at opening night; it’s not a musical) depicts the maturation of a fictional young artist named Ken who applies to be a studio assistant to the legendary curmudgeon in 1958. The imperious and opinionated genius has accepted a lucrative commission to paint thematically-linked murals for the Four Seasons restaurant inside the Seagram’s Building currently under construction in New York City.

Over the next two years, Ken initially soaks up Rothko’s diatribes about art, then gradually cross-examines the pronouncements in Socratic dialogues and finally outright challenges the master’s inability to embrace the evolving art scene.

It is an intellectual pas de deux where the pliés and jetés are punches and jabs ranging from the ability to truly “see,” to the balance between Apollonian and Dionysian philosophies of creativity. Yet the intellectually dense script by the screenwriter of Gladiator and Hugo is surprisingly unpretentious.

Jacob has worked hard with his cast to make these verbal struggles lucid and to inject enough circling movement to keep the very talky script from seeming static.

Zeisler is impressively forceful and vibrant from the opening moments, even in thoughtful repose. He creates a fanatic living completely inside and for his Art. Rothko/Zeisler never says it directly, but his every utterance screams that for him life is art, and art is life. Literally. Like crimson hemoglobin.

When he is on the cusp of painting, he stares at the canvas (invisibly hanging between him and the audience) like a surgeon trying to decide where to cut, pouring out an intensity that prefigures the lasers just then being developed. They say that performance art can’t accurately capture or portray the act of creation, but this comes close.

Taylor, who has a winning persona, clearly illustrates Ken’s internal growth without hammering at it. He and Jacob deserve credit for allowing Ken to really push back and challenge the master – and to make it credible. In other perfectly fine performances, Ken hasn’t always come into his own strongly enough to justify his eventual graduation to the outside world.

The Maltz edition isn’t perfect. Zeisler really only has two modes – bombastic and titanic. He does both very well, but the bombastic begins to sound a little monochromatic after a while. He also needs to drill himself on his lines a little, just so this torrent flows out a little smoother. But when he erupts into one of those ragged rages that were George C. Scott’s glory, you want to back up a few feet for fear some of his volcanic lava is going to spill over on you.

Another shortcoming is the script itself: While Ken grows, it’s not because he actually learns anything here that frees him, other than the negative example of his boss’ self-absorption and intransigence. Similarly, Rothko gets depressed and reexamines his ethos, but he doesn’t learn anything new and doesn’t change a whit. The only people in this play who learn, and they learn a lot about the inner life of an artist, is the audience.

James Kronzer’s setting is a marvelous brick lined industrial warehouse with a metal trestle, a place not so much of ivory tower creation as practical manufacturing.

Inescapably enhancing the environment is the evocative and endlessly imaginative lighting design by Gina Sherr. She often washes the studio with a half-light as if we are in a protective womb with underscoring lighting shifts so subtle that only theater professionals will notice them. Other times she ostentatiously paints the stage with intentionally artistic arrangements such as illuminating only a canvas and throwing the contemplative artist into silhouette.

The same praise is due sound designer and composer Jane Shaw who mixes classical pieces echoing the pinball game inside the artists’ heads with her original elegiac music that mirrors the same process of searching.

The Maltz, home of the mainstream musical, deserves a pat on the back for applying its considerable resources to a straight play. The Jupiter team proves, as it did with 12 Angry Men and Cabaret, that it has the skill to deliver entertainment for thoughtful adults along with escapist fare.

Side note: The show is presented without the usual admonition about cell phones and candy wrappers. Apparently it was needed. One lady in row C felt it was important to stay available to her ringing cell phone in case her liver transplant became available and another woman in row E, possibly wasting away from severe food deprivation, needed to rattle her M&M wrapper for nearly the entire 90-minute show. And I felt sorry for the epidemic of people who apparently had bladder problems because it was essential for them to leave the auditorium before the curtain call.