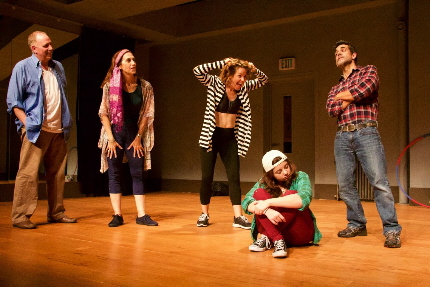 In Annie Baker’s plays, nothing happens until everything happens. Her characters are the proverbial frogs, swimming placidly in cold water that, over the next two to four stage hours, has heated to a boil without them knowing it, because they’re too busy doing nothing.

They while away days or weeks at a time in settings suggestive of human hamster wheels, of purgatorial stasis: an alley behind a coffee shop in The Aliens, a shabby cinema in The Flick, a maddening drama class in her breakthrough Circle Mirror Transformation. They talk about music, about exes, about movies, about acting, about anything but themselves in the less-than-desirable present.

But it always catches up to them, in ways that, in a splendid production, surprise everyone around them, including us. The 2010 Obie-winning Circle Mirror, scheduled and rehearsed by Alliance Theatre in 2014 but never staged, is finally receiving its professional regional premiere by the intrepid Area Stage Co., and the disarmingly funny production is a ravishing success for Baker purists and newbies alike. It’s a more accessible introduction to her work than the other two plays while still proceeding with uncompromising naturalism.

John Rodaz directs a five-member cast with the requisite patience of a mumblecore Pinter, each extended silence pulsating with nervous energy. Not only does his ensemble uniformly render distinctions between actor and character invisible, it does so with humility, generosity and egalitarian joy: Rarely has it been such a pleasure to watch nobody steal a spotlight.
Circle Mirror Transformation takes place over six weeks at an Adult Creative Drama class at a Vermont community center. It’s taught by Marty (Miriam Kulick), a big-hearted and well-intentioned employee of the center who is not, by anyone’s account, Stanislavski. Her class consists of the thespian equivalent of stray dogs, emotionally ragged and looking for a home: There’s Schultz (Carlos Orizondo), a quietly intense middle-aged carpenter and not-recent divorcee who still wears his wedding ring; Teresa (Sarah Melick), a cheerful and energetic actress in her 30s with relationship baggage and an empty docket of industry jobs; and Lauren (Jeana Montgomery), a brooding teenager from a potentially broken home, whose sullen demeanor doesn’t match her Broadway ambitions. Rounding out the group—oddly, and he knows it—is Marty’s husband James (Gil Kaufman), an awkward erstwhile radical who is placating his partner’s hobby.

The plot, such as it is, consists of legitimate theater games, crafty improv exercises and sophomoric nonsense, jumbled together by an instructor who can’t discern the therapeutic breakthroughs from the pretentious drivel. Her students imitate inanimate objects, finish each other’s sentences, inhabit the skin of their fellow classmates, re-enact moments from their past, and bounce around the studio floor like bumper cars at an amusement park. As the games grow increasingly personal, the characters arrive, finally, at discomfiting truths about themselves.

The play captures the blurring of art and life but also of character and actor, and it requires from its cast the kind of self-effacing nakedness that is difficult to perform but a pleasure to experience when it’s done right. If the actors made any verbal missteps this past Sunday, all were subsumed in Baker’s hyperreal script, with its copious share of false starts, stammers, self-corrections and predicate-less subjects.

Each performance is fully realized and rich in subtlety. Orizondo is the picture of repressed passive-aggression. Crushing on Theresa but floundering in his come-ons, he laces even benign phrases with bitterness: His unprompted inquiry “What’s your deal?” is delivered with an accusatory inflection; later, his seemingly complimentary “you’re so graceful” resounds with barbed envy.

Melick terrifically embodies Theresa as a beam of sunshine that might burn you if you get too close. It’s easy to see why the play’s males fall under her spell, and it’s just as easy to believe she doesn’t know she’s casting one. Montgomery’s wry performance as Laura presents a textbook disaffected millennial, her face sporting a look of eternal meh, likeable despite her best intentions to bleed into the walls. Kulick brings out Marty’s strengths as well as her vulnerabilities as this motley crew’s leader, with costume designer Maria Banda-Rodaz astutely dressing her in the hippie togs of a younger, more carefree woman. The saddest performance of all may be Kaufman’s, but it’s no less exquisite than his peers’. Like his pitiful virtual-sex tourist in Area Stage’s The Nether earlier this year, he received the short end of the personality stick this time around. His James is tired, out-of-place and increasingly estranged from his loved ones—a broken man going through uncomfortable motions, even before his game-changing revelation late in the play.

Baker has said that indie films inspired her approach to Circle Mirror, which is evident in the play’s many short scenes and honored in Rodaz’s direction, with its cinematic fade-outs and indie-rock soundtrack transitions. Baker has a tendency to abruptly end scenes just as they’ve scaled an emotional climax. Watching them feels like observing a Polaroid developing before our eyes: As soon as the picture is clear, we cut to the next bit of blurry friction materializing and then disappearing.

Which is more than fine. Perhaps unlike Marta, Baker and Rodaz know exactly what they’re doing, and we’re more than happy to be guided moment-to-moment, wide-eyed and ready for anything. Or nothing.