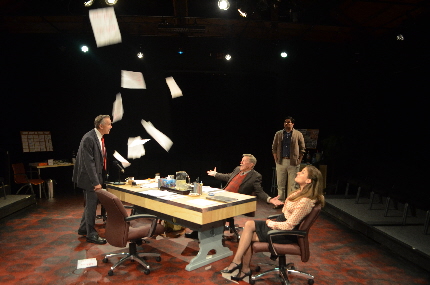 Peter Galman, Jim Gibbons, Alex Alvarez and Gretchen Porro in Thinking Cap Productions’ edition of A Public Reading of an Unproduced Screenplay about the Death of Walt Disney

Thinking Cap Theatre no doubt planned its season to include A Public Reading of an Unproduced Screenplay about the Death of Walt Disney before the political hotbed of an upcoming election had elements of megalomania as one of its trigger points.

Picture the man on the pulpit spewing rhetoric that, when it comes down to it, isn’t really about all the things he’s going to make right again for people, but more about what a powerful position means to him. Whether he’s your favorite uncle or not, he’s a model of a certain type of human being. They are Forbes 500 CEOs, powerful men (yes, usually men) who only want to do well. Ironically, or maybe not, playwright Lucas Hnath premiered a play in 2016, “Hillary and Clinton.”

TCT’s choice of A Public Reading of an Unproduced Screenplay about the Death of Walt Disney is so relevant right now, it’s uncanny. Many people will leave the theater after watching the play saying, “Geesh, I didn’t know Walt Disney was such an egomaniac,” but this isn’t a bio play, it’s a dramatization — a global representation of narcissism.

This is not easy theater, by any means, but not one that Thinking Cap would ever shy away from. Their tagline is “theatre exploding with thought” and if any play fits the mission, this one does.

The challenge is mostly because of the construction of Hnath’s off-beat dialogue – its staccato rhythm not only unspools the story but, as the main character’s life starts to be cut short, Walt’s rat-a-tat speeches get quicker, too. Oddly enough, while he speeds up, Hnath has the supporting characters’ delivery slow down.
Then there’s the script itself. As the title suggests, the play is staged as a screenplay reading, so the dialogue incorporates film language such as “Exterior Shot,” Cut To,” “Fade In,” “Close Up On,” and “Fade Out.”

Director Mark Duncan is able to take all of these surreal elements and craft them together into a mesmerizing night of theater. Set with the audience on four sides (theater in the round, but here theater in a square) sometimes has its pitfalls. At one particular point of action, one of the actors seated in a chair entirely blocked the view of the main character. At least for those seated on stage left.

Using different playing areas was inventive and did create much-needed dynamics in this dialogue-heavy play.

TCT has created the perfect cast, too, who obviously have a grasp of the concepts and language of the play. Peter Galman doesn’t only embody the character of the domineering Walt, but is able to evoke sympathy in his portrayal, not an easy task in a character that is written with little redemption.

“People depend on my name,” says Walt. “People name their children after me.” When Galman as Walt talks about the impact Disney films have made on the world, Hnath’s writing spAleeaks volumes. Galman delivers it with just the right seriousness for the worlds to speak for themselves. “Scene Six, Fans: F.D.R. saw my movies, King George was a fan, Douglas Fairbanks says nice things about me, Jerry Lewis, Groucho Marx, fans . . . Doris Day liked Donald Duck . . . Alan Turing’s favorite movie was “Snow White,”  and when he killed himself, he killed himself by eating a cyanide coated apple because he liked the movie so much.”

The always likeable Jim Gibbons play Walt’s brother, Roy, a sensitive and quiet fall guy. Gibbons’ approach is a wonderful juxtaposition to Galman’s boy bully in man’s clothing – the vodka-swilling, cigarette-smoking, four-letter word spewing Walt. The only thing slightly lacking in Gibbons’ performance is the ability to pick up cues quicker, which would make Hnath’s staccato really mimic a rat-a-tat-tat.

Alex Alvarez as The Actor Playing Ron, Walt’s son-in-law, Ron Miller, an ex-football player adds to Ron a blockhead quotient that plays so well when Walt decides to give him a big role in the company to spite Roy. Gretchen Porro, who was a standout in Thinking Cap’s production of “The Realistic Joneses” is feisty and fiery as The Actor Playing Daughter. The constant bickering between Daughter and Walt concerns her declining to honor Dad by naming her son after him. “Why can’t you do this?” Walt questions.

Porro’s presence is so powerful and filled with levels, even in the few short scenes she’s in.  Too bad Hnath didn’t give Daughter more.

Eric Nelson’s lighting design adds so many elements to the play – darkness when Walt is tumbling into his own dogma, fiery when there are family disputes, and brighter than bright as Walt plans his perfect city.

“Death of Disney” was first produced in 2013 by Soho Rep. Hnath, who is currently a resident playwright at New Dramatists in New York, grew up seven minutes from Walt Disney World in Orlando. Perhaps it was too many times on the Monorail or maybe he wasn’t tall enough to get onto his favorite ride in his formative years. It’s obvious that Walt’s created towns and lies about lemmings made an impact on the boy. The skewed-eye-view is creative, thought-provoking, and intriguing.  At times, it’s a bit creepy. Supposedly a fan of cryogenics, Walt talks about preserving and freezing his head for future use. (“Cut through spine, hard to cut through, cut the spine, spine snaps.”)

This isn’t a typical night of theater, and, in this far-from-typical-times in which we are living, “the Death of Walt Disney” is just the right fit.