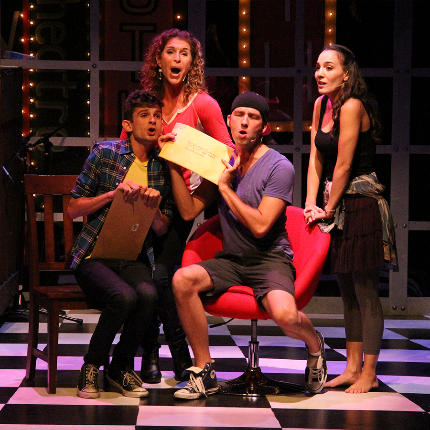 If you know who Alice Ripley is, if you recognize the name of the musical Brooklyn, if you get the humor in the idea of stunt-casting Paris Hilton as Mame, then [title of show] playing at Area Stage Co. was written for you.

While its scruffy charm should amuse a general audience, this 2004 musical satire is theater geek heaven. It is crammed to the gunwales with rollicking humor rooted in inside baseball knowledge of Broadway lore.

It is guaranteed to elicit embarrassingly isolated giggles as different clutches of people catch this reference or that; in my case, it was a handful of lyrics from Stephen Sondheim’s Into The Woods that only a Sondhead would recognize out of context.

Area Stage, a Miami company better known for its youth programs and productions, has collected a strong cadre of adult professionals to deliver this hoot under the direction of Area Stage co-founder John Rodaz, the musical direction of on-stage pianist Jeff Hess and the spirited choreography of Ron Hutchins.

The show, written in real life by Jeff Bowen and Hunter Bell, tracks the efforts of Jeff Bowen and Hunter Bell to write this very show for a fringe festival (that they will act in as Jeff and Hunter), enlist their actress buddies Susan Blackwell and Heidi Blickenstaff (who eventually will play themselves), then develop it for off- Broadway where its success leads to a Broadway run — all of which actually happened. Taking it another step, the original one-act fringe festival piece was updated to reflect the real developments in the show’s evolution.

The music and script twist endlessly in on themselves in inventive ways that would make Pirandello dizzy (or Christopher Nolan). For instance, some scenes are supposed to be transcriptions of the creators brainstorming ideas for what will eventually be the show we are watching. So when one of them is about to give their colleague their phone number, they give it as (555) 555-5555. When the colleague looks puzzled at the generic phone number, their partner notes that they wouldn’t want their real phone number spelled out in front of the strangers in the audience.

The title of [title of show] comes from the part of application form to enter the New York Musical Theater Festival where the fill-in-the-blank slot asks for [title of show] and Hunter and Jeff just intentionally leave it as [title of show].  It’s that kind of show.

The cast is clearly having a blast including Chris McCabe and Ryan Townsend as the authors, Jessica Brooke Sanford (unrecognizable from her turns as the daughter in Fear Up Harsh and the mother in Child’s Play) and Jodie Langel. All of them are solid, but Langel, a transplanted Broadway baby, has the verve and polish of a veteran, especially in her 11 o’clock number, “A Way Back To Then.”

The quartet are especially strong delivering the musical numbers, handling the witty, twisty lyrics, close harmonies and Hutchins’ imaginative steps with energy and skill. Surprisingly, they aren’t half as compelling or effective with the non-musical scenes even though the material is just as funny. But their charm carries the evening past the rougher parts.

The show reveals a bit of heart as the colleagues grow more distant in the wake of their success. They have to recommit themselves to their quirky vision to find success, reflected in the penultimate number with the lyric “I would rather be nine people’s favorite thing than one hundred people’s ninth favorite thing.”

[title of show] is a delightful depiction of Millennials who stubbornly refuse to acknowledge – nor do they care—that Broadway is no longer a significant source of mass pop culture. This is a labor of love.