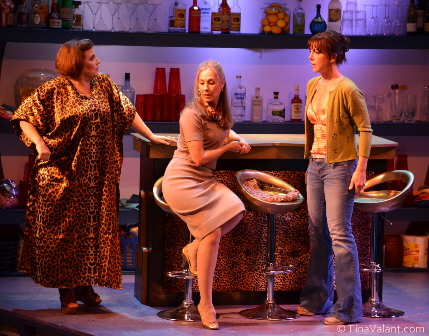 Margot Moreland, Shelley Keelor and Katie Angell Thomas are on the prowl in Cougar the Musical at The Plaza Theatre / Photo by Tina Valant

Like the Chippendale dancers, Donna Moore’s Cougar The Musical, now on stage at the Plaza Theatre, is meant to fire up a female crowd. And with just as much over-the-top cheez whiz as the Chippendales have, Cougar The Musical collides fantasy with reality and trots out every cliché about women in the throes of mid-life “what now?” as it can muster.

A bachelorette party in the front row at the Plaza was in the right place on this particular Sunday, as were a group of ladies who looked as if they took the afternoon off from their weekly mahjong to enjoy Cougar. Yes, this is the target audience for Cougar. Any poor sap of a husband can check his manhood at the door before entering the auditorium. Most of the (very few) men in the crowd at this particular show checked their watches frequently.

This is really a No Man’s Zone, a pure estrogen fest, drawn in the same vein as Menopause: The Musical, though not as clever.

The Plaza cast, however, has charm enough to make the show’s shortcomings, of which there are many, tolerable and even entertaining. The most predictable one-liners (from the Henny Youngman school of comedy) come off funnier than they ought to because of this talented ensemble: “Where have you been the last 10 years of my life?” asks one of the Cougars to a young stud whose wearing a Twilight T-shirt and pants around his hips that expose his underwear. “High school,” he retorts.

The musical was developed from a cabaret show, Cougar Cabaret, that stand-up comedian Moore performed in New York City for 18 months. In it she played three different characters. The show is basically a series of sketches, and to create the show, Moore has attempted to develop a throughline by creating a friendship based on the common ground of the three women. It seems unlikely and a bit forced.

Their common ground is that all are going through mid-life transitions (dare we say crises?). Lily (Katie Angell Thomas), 47, is about to be divorced for the second time; her children are grown, and she makes a living entertaining at kids’ parties dressed as Dorothy from the Wizard of Oz.  Clarity (Shelley Keelor), a successful, financial analyst, has decided to quit her high-paying job. She’s decided money isn’t everything and she’s ready to pursue her passion – teaching women’s studies.  And finally, there’s Mary-Marie (Margot Moreland), the Queen Cougar, a.k.a. Miss Kitty, a Southern belle with no filter. She’s the proprietor of the just-opened Cougar Bar where the drink of the day is always a Cougartini, a pomegranate juice and vodka combo with “antioxidants to keep you feeling young and vodka to help you forget that you’re not.” Mary-Marie is ready for action after boosting herself since the death of her husband, “may he rest in pieces.”  She confesses that she’s “so self loving, I am practically dating myself — so if you are with me, it’s like being in a threesome.”

Clay Cartland is charged with playing all of the men in the show (and even one woman). This multiple character device came out of Moore’s cabaret — she had a male co-star who played three male characters.

Most of the action takes place center stage at the Cougar Bar. Stage left serves as Clarity’s post, while stage right is Lily’s launching pad. The three meet in the middle at the Cougar Bar, where Mary-Marie holds court.

Dodd Loomis’s direction is smart and solid, and thankfully so — this is one of those shows with so many moving parts (not setwise, but an array of frenetic action), that it needs a good eye to keep it contained, which he does.

The actors are to be commended for giving their all, especially in some of the musical numbers that are difficult because of their over simplicity. The program credits the music to Moore and five other composers. Eric Alsford’s musical direction adds a much needed dimension to songs that hardly ever let up on the “I Am Woman Hear Me Roar” theme.

The opening number On the Prowl, with its ’70s disco beat, introduces the three women, all in sunglasses, and ready to let their hair down. Lyrics give a heads up to what’s in store: “Come here often? I’ll sleep when I’m in my coffin,” “I’m out of my cage, a modern day sage, but don’t ask my age,” and a catchy chorus of “somethin’, somethin’, somethin’.”

It is the abandon of all the actors that makes Cougar roar. Cartland is a hunk of burning fun as a cowboy who shows up in rodeo gear after an online meeting with Mary-Marie and as a stud with a swagger. But when he’s called upon to be Lily’s nice-guy younger boyfriend, Buck, Cartland segues easily into the more serious role. Yet, he can’t help but steal the show dressed in drag as Eve in Shiny and New. While it’s no doubt a crowdpleaser, some may find that the character (and not the actor’s fault) borders on offensive in its depiction of an Asian nail salon owner.  There is also the tasteless accidental meeting of mother and son via a Craigslist ad, which has its own “ick” factor.

Moreland’s no-holds-barred attitude as the lusty, busty Mary-Marie hits its peak when she takes the spotlight and performs a bold strip tease — ending up on stage wearing only a bra and panties in My Terms. This is one of the most affirming statements that the playwright makes and with Moreland’s help, is one of the most genuine moments in the show.

Angell Thomas can’t help but be likeable (her character Lily has the earnestness the actress brought to her previous Plaza role in Waist Watchers The Musical, and seen, too, in her portrayal of Violet in Broward Stage Door’s 9 to 5).  She adds a dose of signature comic timing to the role of Lily, which gives the character more depth than what’s most likely written on the page.

With its overload of sexual innuendo, menopause jokes, and clichés, plus references that seem dated (a few Ashton Kutcher and Demi Moore tips, though now updated with a disclaimer “like Ashton and Demi – before they broke up”), and a pitch to a late-night talk show host that went over my head: “You think you say you’re sorry, and it’s over?” Lily asks Mary-Marie. “It worked for David Letterman.” Huh?

Cougar The Musical scratches and claws its way through 90 minutes, trying to utterly convince that women of a certain age can be on their own with a dose of self worth, a dash of empowerment and younger men to keep them perky. “You don’t need a king to be a queen,” Clarity lectures.

The Plaza’s production is entertaining, less because of Moore’s cheeky musical script and more because of the cast and the show’s behind-the-scenes merrymakers, including costume design by Peter Lovello, scenic design by the always spectacular Michael McClain, lighting design by Preston Bircher, choreography by Elizabeth DeMarco (applause for the snappy choreography in Shiny and New) plus musicians, technicians and producing director Alan Jacobson.

There’s fun to be had at Cougar The Musical, but don’t expect a lion’s roar — this Cougar hungers for better material.