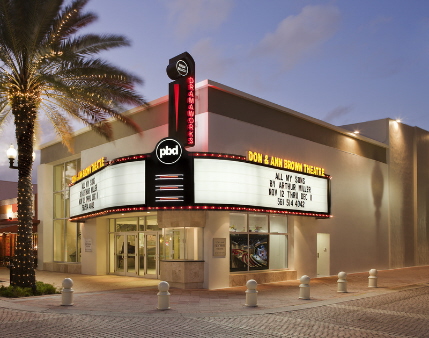 Palm Beach Dramaworks’s 2014-2015 season will continue its tradition of presenting classic American and British dramas and musicals, a few familiar, some rarely if ever done by professional theaters in South Florida.

The season opens Oct. 10-Nov. 9 with the 1938 Pulitzer Prize-winning Our Town. This affectionate look at small town life as an examplar of all human existence has been a staple of school and community theater for decades. But the quiet poignant work is rarely produced by Equity theaters because of the large cast. J. Barry Lewis will direct a production that is intended to bring back many of the theater’s favorite actors from past seasons, said Producing Artistic Director William Hayes. A deceptively difficult play to stage effectively, it had a triumphant bare bones revival in Chicago and New York in 2009.

Israel Horovitz has become a frequent visitor to South Florida because his plays are frequently revived or receive their world premiere at theaters headed by Louis Tyrrell at Florida Stage and Arts Garage.  From Dec. 5-Jan. 4, Hayes will direct Horovitz’s My Old Lady from 1996. The plot is described as “A down-on-his-luck New Yorker inherits an apartment in Paris and must live with his tenants, an old lady and her rigid daughter; their lives soon intertwine in unexpected and profound ways.”

When done well, Christopher Hampton’s adaptation of Pierre Choderlos de Laclos novel Les Liaisons Dangereuses is a deliciously sexy, highly intelligent romantic thriller in which cold-hearted aristocrats a few years prior to the French Revolution use the human heart as a battleground – a reflection of a moral decay and decadence that does not speak well of society. The production slated for Jan. 30-March 1, will be directed by Lynnette Barkley, also a choreographer, who helped stage last season’s terrific Exit The King and Dancing at Lughnasa at Dramaworks

Sam Shepard’s exceedingly strange family reunion forms the focus of Buried Child to be directed by Lewis in the March 27-April 26 slot. In this 1979 Pulitzer winner, a young man returns to his Midwestern home with warm memories after an absence of six years only to find he is unrecognized by his decaying family in this tragicomedy. The only local theater to produce this recently was Outré Theatre Company in Miami Beach in 2011.

The most well-known piece to South Florida audience is Lady Day At Emerson’s Bar And Grill scheduled for May 15-June 14. Lanie Robertson wrote this look at blues chanteuse Billie Holiday performing a dozen songs in one of her last club dates just four months before her death. Before our eyes, she deteriorates due to substance abuse and heartbreak.

Dramaworks will once again mount summer concert versions of two musicals that may not have had a professional production in decades in South Florida, if ever. Both shows will be directed by Clive Cholerton who has helmed Dramaworks’ musicals for the past two summers notable for an unusual amount of staging.

Zorba is the 1968 musical featuring a rich evocative score by John Kander and Fred Ebb (Cabaret, Chicago) and a script by Joseph Stein (Fiddler on the Roof) based on the 1964 film Zorba the Greek with Anthony Quinn and Alan Bates and based on the 1952 novel by Nikos Kazantzakis. While not a raging success on Broadway, a vibrant original cast album with Herschel Bernardi and interest in the source material have kept it alive in regional and community theaters.  It’s scheduled for June 20–29.

Even more rarely produced but quite famous is The Most Happy Fella, a virtually sung-through score by Frank Loesser (Guys and Dolls). The 1956 musical is based on Sidney Howard’s play and film, They Knew What They Wanted. It tells of an aging wine grower who sends off for a mail order bride – who then falls in love with his young foreman. The work is often considered an opera and has been produced by opera companies. Among the more famous numbers are “Standing On The Corner (Watching The Girls Go By)” and “Big D.” The show plays July 18–27.

Dramaworks is based in downtown West Palm Beach at 201 Clematis Street. For ticket information call (561) 514-4042, ext, 2 or visit www.palmbeachdramaworks.org.