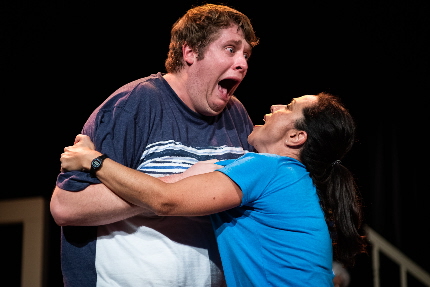 Underneath the externals, Falling is not about a family dealing with the complex challenge of living with an autistic adult. Or not just about that.

New City Players’ profoundly moving production has a far broader and universal reach: It seems to be as much about the scores of well-practiced routines, accommodations and coping mechanisms that make any loving relationship possible long-term – sometimes carefully plotted, often unspoken.

It’s a portrait not a prescription. It outlines various long-term options for this specific situation but carefully avoids siding with any of them. Indeed, it seemingly ends with an explosion or implosion of meltdown frustration at the conflicting solutions, each of which has inescapable costs.

Playwright Deanna Jent, who has drawn heavily if not documentarily from her own experience, and the NCP production say the play is really about how to love someone who is difficult to love. But I’m not sure that’s what comes across; clearly everyone in this play loves each other while acknowledging with various levels of resentment that it has involved unrelenting and exhausting sacrifice.

Regardless, what this superb cast and director Jessica Schulte have presented on stage is a brilliantly observed, passionately acted and emotionally eviscerating tableau.

Full disclosure: It’s trifle difficult for this critic to distance himself completely. My younger brother Peter is high-functioning autistic although not remotely in the same place as this character on the spectrum. But the family issues, the feelings, the managing tropes are all painfully familiar. I left opening night somewhat numb.

The play opens in the Martin family’s living room-dining room notable for carefully stored tubs of children’s toys. Shambling on aimlessly is Josh, a tall broad-shouldered hulk of an 18-year-old whose bright blue eyes fixate on some children’s books that he carefully arranges on a coffee table. Then he goes over to a small box on the ceiling with a pull cord. He yanks the bottom open so that a small waterfall of white feathers drops over him, sending him into a gloriously paroxysm that the family calls a happy dance.

In the next minutes, the rest of the family enters: mother Tami, father Bill and 16-year-old daughter Lisa. There is the usual teasing, cross-reminders of schedules and the like common in any household. But another element is evident in the unusually laser-focused nature of their preparations as they prep Josh to go to school. His gentle but initial resistance sets off the parents’ well-honed ways of deflecting, deflating and redirecting Josh’s “in extremis” single-mindedness. “Are we going to have a safe hands day at school today?” Tami asks Josh as if she is asking if there will finger-painting today.

Tami and Bill are anxious because Bill’s recently-widowed mother Grammy Sue is coming to visit and the somewhat judgmental woman hasn’t seen the latest vision of a seemingly grown man with the mind of a child. Nor is she clued into the complex and intricate network that the family has developed to maintain the stable, steady ordered universe needed to keep Josh calm. Calling out for peanut butter is a code phrase for how to handle a situation. Gallows humor is a major aid to keeping the ever-present angst at bay for a moment.

As seemingly gentle and even adorable Josh can be, when the world becomes the slightest bit complex or he is frustrated being denied something, we suddenly see him erupt in a brief but devastatingly fit of violence. He is able to choke his beloved mother who then must steely calm him down while he is attacking her, then console him as he collapses in anguished regret. A barking dog can unravel the carefully constructed safety net. The unexpected happens frequently and upends the carefully buttressed balance.

A side note: The playwright and the production stress that Josh is just one point on the spectrum and that no one should mistake him as an exemplar for the entire or even a large portion of those on the spectrum. But his specific is hardly unique.

When Grammy Sue appears, she is as advertised: a warm, loving but slightly judgmental person who is askance at the reality of Josh’s behavior and the family’s gymnastic machinations needed to accommodate him. Deeply religious, she tries to get the family to pray with her, but they have long ago exhausted that avenue.

As she stays, the under-control veneer of the household is stripped away. Lisa is growing ever more resentful of how her teenage life is being robbed. Bill is frustrated at the seemingly no-win to the ordeal and can’t get the sexual release he wants from his wife. Tami, a saint in the making, is drinking more and more, and sobbing when Josh can’t see that she is at the bottom of her reserves. The situation is tearing the apart the sinews of the family cohesiveness.

But a major explosion forces everyone to reexamine the linchpin issue: Should the family keep Josh with them in the house or should they find a group home, thereby releasing the family to live a more normal life but depriving Josh of a constant loving environment.

Under Schulte’s hand, the cast establishes a credible family chemistry and the sense that like a long-trained troupe of aerialists, they know what is expected of each other in long-tested handoffs in mid-air without a net.

No one in the cast is the right age for their part, but these actors are convincing enough that you easily forgive it as just another part of the willing suspension of disbelief.

Everyone’s work is laudable, from Abby Nigro (Tar Beach) as Lisa, the always reliable director-actress Elizabeth Price (An Accident, This Random World) as Grammy, and Todd Bruno doing some of his best work as Bill. Arlette del Toro (Island City’s Perfect Arrangement and Son) carries much of the show as the mother whose inspiring devotion is being worn down.

But saving the best for last, New City Players Producing Artistic Director Timothy Mark Davis once again simply triumphs as Josh. He is unrecognizable from the feral Lee in True West or the doubting friend in Art. He physically embodies Josh’s wild wide mood swings. His blue eyes are suffused with pain, joy, confusion, anger and frustration. His voice mumbles a few phrases repeatedly with a beatific smile or issues guttural wails. He can be joyfully free such as in his happy dance or terrifying in his fits of violence. Davis must have done some studying or been coached considerably because I can attest to the accuracy of the vision. To say it is a stunningly effective performance is not the right noun. It is not just the observed mannerisms, the body language, the vocal quality that he is replicating. There is carefully-invoked technique, of course, but Davis sinks so deep into Josh that the autistic adult simply is.

Schulte, who was wonderful as an actress in NCP’s two-hander Constellations, proves once again here to be a director who skillfully guides and molds performances and a production, but does it invisibly such as she did with NCP’s Art. Even with her mirthful and highly theatrical Twelfth Night, her results feel so much of a single piece that you never stop living in that world to notice the work of the director who was instrumental in creating it.

Over the years, New City Players has developed off-stage initiatives connecting with the community including panel discussions and group discussions about issues dovetailing with their productions. In this case, that outreach includes a “second act” following an “intermission” when the 75-minute one-act play ends. This takes the form every night of a 20 to 30-minute talkback with actors and someone knowledgeable in the field of autism.

The playbill also includes a fascinating short essay about the play and autism by dramaturge Susannah Quinn that highlights some of the coping mechanisms you will see. Well worth reading before the lights go down. There’s also a list of agencies that can help families or educate the public. 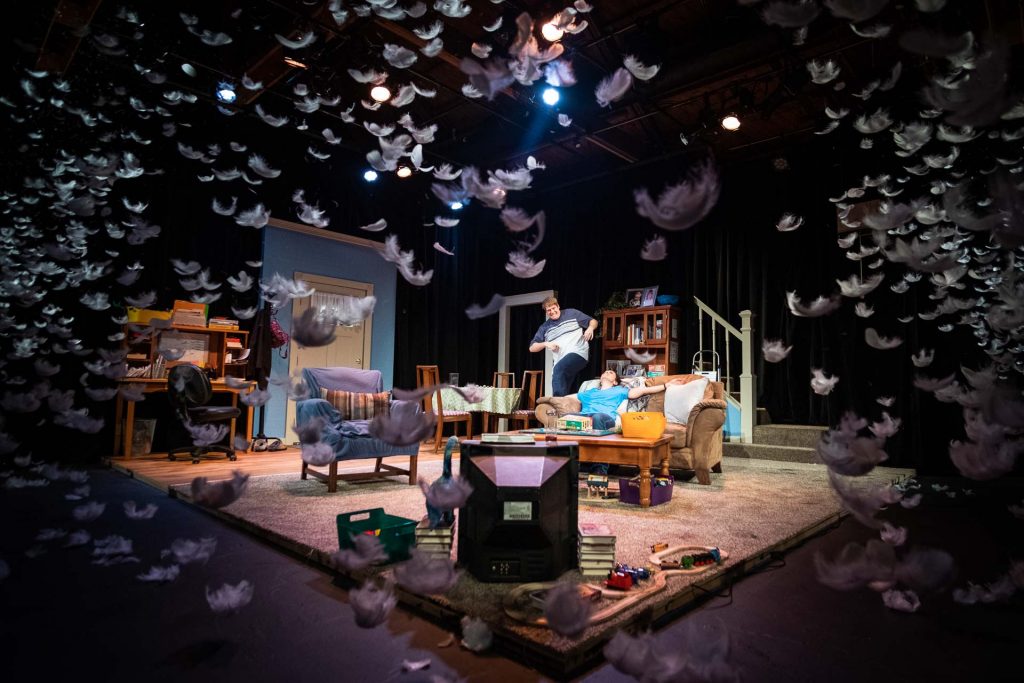