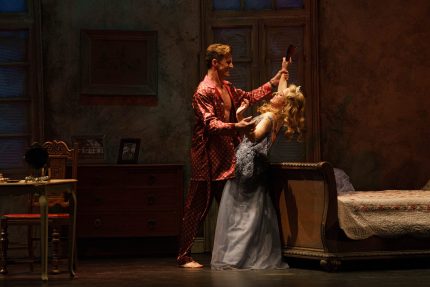 Blessed with a glorious score beautifully played here and at least two soaring arias thrillingly executed by its diva, you would think that André Previn’s take on A Streetcar Named Desire would be a triumph as Florida Grand Opera’s first major production in two years.

But as well worth it may be seeing this work as finely directed and acted as if it were a conventional play, the collision of high-toned opera and Tennessee Williams’ theatrical drama simply do not meld into a single artistic whole.

Part of the concern may be that when Aida calls for a cup of wine in Italian, her vibrato seems natural. But when Stanley Kowalski bellows he want to use the bathroom in English or Blanche Dubois flirts with her beau in fluttering Scarlett O’Hara, there is a jarring disconnect.

To be fair, based on this critic’s comparative inexperience with operas in English, we struggled all night—more than three hours’ worth—to accept the creative team’s standard opera conventions. Hey, some people accustomed to straight drama can’t quite adjust to a cowpoke breaking into song about a beautiful morning in Oklahoma either.

Reportedly at the Williams estate’s insistence, the narrative closely follows Williams’ Pulitzer-winning classic with a few minor changes. But Phillip Littel’s dialogue and lyrics play fast and loose with Williams’ verbiage, while being sure to include most, if not all, the classic lines that audiences are waiting for.

Interestingly, the sentiments that Williams delivered in a few sentences or, at most, in a monologue, take a long, long time for these characters to get across. But, of course, the point of most opera is to relish the beauty of the delivery, not get hung up on the narrative staying in motion.

In this, FGO can boast the performance of Cuban-American Elizabeth Caballero whose soprano is a wonder in a role created by Renee Fleming. Near the end, when Blanche conjures an imaginary future where she will die surrounded by the peace and beauty of the sea, the expert skill in Caballero’s carefully-controlled voice vanishes in the swelling emotions she elicits from the audience sympatico to what Caballero is emoting.

The rest of the cast is fine, including New Zealand’s Hadleigh Adams who stepped in about two weeks ago when Steven LaBrie invited to tour with opera quartet Il Divo. Adams, who will return in April in FGO’s Fellow Travelers, gave us a lanky Stanley (filling out the most pristine T-shirts ever seen) fully invested in the complexity of the character. In Previn’s work, Blanche is the focus of the piece whereas Williams has the two characters equal combatants at the center of the work. But Adams holds his own, even if he never projects the antagonism and menace that Stanley is supposed to exude from the first minute, a relationship exemplified in the classic pre-rape line: “We’ve had this date with each other from the beginning.”

Special note is due to soprano Rebecca Krynski Cox in her FGO debut as Stella who makes her the most three-dimensional of all the characters on stage. Tenor Nicholas Huff is fully believable as the schlubby Mitch.

Opera directors don’t get a lot of attention, but Jeffrey Buchman deserves kudos for eliciting credible dramatic performances from the cast with body language, facial expressions and vocal intonations that are especially effective when the lyrics become unintelligible. He deftly stages the bodies and movements in a naturalistic manner rather than the classic opera pose of guy stands behind and to the left of lady, they look straight ahead and belt.

Which leads to another problem with English-speaking operas: When you can’t understand exactly what the Queen of the Night is singing, you’re not too worried because you look up at the projected lyrics and surrender to the pure sound. But when you have to do that about half the time and the words are ostensibly English, it doesn’t land right. Everyone here wrestles with this, but in the most obvious example: When Caballero is singing in the lower part of her range, her words are relatively comprehensible. But when she flies anywhere near the top of her considerable range—and it is a magnificent sound—she could be singing Lithuanian.

Again, one of the reasons to savor this production is conductor Gregory Buchalter and the orchestra’s mastery of Previn’s difficult expressive score with so many styles from dissonant jazz to lyrical Puccini woven together and sometimes intentionally interrupting each other. The late Previn was best known as a multi-threat pianist, conductor and composer in jazz, classical music and Hollywood film scores.

For a piece written in 1995 and debuting in 1998, this work most resembles a merging of the 1950s uniquely American sound of Leonard Bernstein, Aaron Copland and fellow film composer Alex North who wrote the incidental music for the Broadway play and film of Streetcar.

The hearts and emotions of the characters, as well as the unique sense of the rundown French Quarter, flow out of the pit, from fluttery strings echoing Blanche’s anxiety to bellowing horns standing in for the horn of a passing freight train.

Streetcar marks the opening of FGO’s 80th season and the 10th under General Director and CEO Susan T. Danis. It’s been a rough two years since Rigoletto was cancelled (and will return in March, Covid-willing). Danis and company have taken a score of steps to keep this a viable operation from a dozen small-scale performances in a dozen smaller venues to educational projects live and online. Streetcar typifies her commitment to expanding FGO’s repertoire from the still beloved and honored classics to works many in the subscriber list have only read about or heard on CD.

Side note: Praise to the Arsht Center for having its ushers patrol the aisles and proactively insist that the well-coiffed gown and tuxedoed audience wear their masks—including over the nose.

Covid protocol: Masks required in the lobby and auditorium. Proof of vaccination or recent testing must be shown at the door along with ID before security wanding.