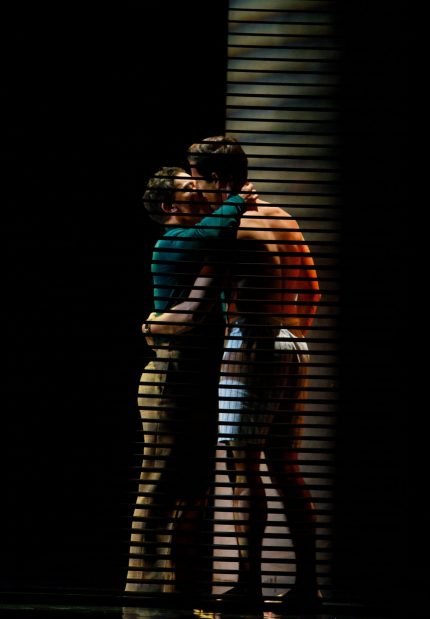 A moment in the shadows / Photography by Jorge Parra

Florida Grand Opera’s current triumph Fellow Travelers has no overweight heroines or bearded villains, no castle turrets or pyramids, no army of comely dancing slaves. Indeed, this 2016 intimate-scale opera is set during the McCarthy Era witchhunts when gays in government were being hunted down.

But this affecting tragedy of a doomed love is fraught with as much – perhaps more – passion and recognizable romance than any tale of a star-crossed Nubian princess and an Egyptian general.

The tale of two men pursuing a deep relationship in repressive Washington, D.C., isn’t more accessible simply because Greg Pierce’s libretto is in English, but because these 20th Century characters are coping with 20th (and 21st) Century conflicts we can recognize and relate to.

And powering everything is Gregory Spears’ soaring swelling music (reminiscent of Alex North’s film scores or even Aaron Copland) that propels the simple even banal dialogue to the heights of human expression, or reveals in music the truth that the characters aren’t allowing themselves to utter in mere words.

Even when the characters are engaged in small talk or office gossip at a Christmas party or saying empty sentiments, the music betrays their inner desires and agonies as the protagonists hem, haw, stutter and interrupt each other.

Fellow Travelers is considered by some a “minimalist” work: only 17 musicians in the pit, a small cast with a handful of people playing four roles, only two acts spread over two hours and 10 minutes including an intermission.

But the cast, director Peter Rothstein and conductor Emily Senturia deliver an evening of emotional power equal to any four-hour stageful of Norse gods.

The story: Timothy Laughlin (Andres Acosta), a novice journalist green to the snakepit of D.C, gets drawn into a passionate romance with charismatic State Department official Hawkins Fuller (Hadleigh Adams). Their deep connection exceeds simple sexual satisfaction. But Sen. Joseph McCarthy has begun his hunt for “sexual subversives” as well as Communists in the government. Tim struggles to come to terms with his political convictions that mirror McCarthy’s, his once-genuine religious beliefs, and his love for Fuller. As the forces collide, an act of betrayal is almost inevitable.

The artists create the arch, cynical, practical environment in government in which repartee is valued. When Tim says he hasn’t got a telephone, someone asks slyly, “Are you Amish?”

Indeed, humor is threaded through much of the evening, such as the catty gossip about McCarthy’s right-hand aide. “Did you hear the joke about Roy Cohn in church,” one asks. The other answers, “ Ahh-m,en.”

Countering that is a chilling scene of Fuller being interrogated by investigators about his sexuality, scenes of the two men clinging together in bed, and Fuller’s pained late-night aria mourning how the most important aspect of his life is limited to “an hour in the shadows.”

The lead actors, including soprano Adelaide Boedecker  as their friend, give what is as close to naturalistic acting as this genre allows. Acosta convincingly creates an ambitious young man swept up in this alien world. Hadley, who earlier this season played the brutish Stanley Kowalski in FGO’s “A Streetcar Named Desire,”  credibly depicts a self-assured sophisticate who is overcome for the first time by a real relationship. Even in chaste scenes, Acosta’s tenor and Hadley’s baritone swirl within each other in an aural reflection of sensual passion.

Rothstein has demanded his cast dug deeply into themselves to release the emotion and her physical staging moves the episodic narrative smoothly with an almost cinematic feel.

Under Senturia’s baton, the comparatively small orchestra nevertheless surges with power and grace, whether it’s the sinuous clarinet in the bedroom scenes or the full sound of the strings mirroring the swelling emotions.

It won’t be lost on FGO stalwarts that two of the season’s entries, this and A Streetcar Named Desire, are contemporary works written in English, continuing FGO leader Susan Danis’ commitment to a mixture of styles. Indeed, there were only a couple of gowns in sight opening night in the company’s first foray in the Lauderhill Performing Arts Center, and a few Bermuda shorts and Hawaiian shirt outfits.

This is the first time FGO has used this venue in Broward County – a modern spacious venue with 1,128 seats. Only about 250 or so were used opening night with those people paying for cheaper tickets at the Arsht now sitting further back in the hall even though there were plenty of empty seats further front.

This critic has watched a score of Broadway shows at the facility. Sometimes the sound quality has been adequate, often it has been miserable. But the FGO team has conquered the site aurally. The balanced voices and orchestra penetrated pristinely to the back of the house with perfect clarity.