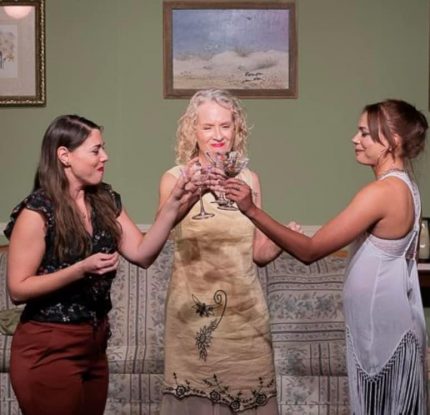 Let’s put this in perspective:

Main Street Players—which courageously decided in 2017 to evolve from a respected community theater to an adventurous chance-taking professional troupe—has gifted South Florida audiences with some memorable evenings: the riveting Race, the funny and unnerving Bad Jews, a ferocious True West.

But not even the Royal Shakespeare Company triumphs with every show. The Miami Lakes theater, like nearly every other company in the profession, also has posted some entries that didn’t land well and MSP deserves kudos for tackling challenging work.

But its current production of Rapture, Blister, Burn executed by earnest hard-working artists misses the target so badly that we could barely wait for the two-hour 36-minute evening to come to a close.

To be fair, Gina Gionfriddo’s 2013 Pulitzer-nominated script is extremely difficult—an impenetrably dense torrent of ideas in conflict nearly obscuring the emotional tumult of its troubled flawed characters—most of whom are really hard to side with.

This evening—both wryly funny and deadly serious — investigates what happened after feminism succeeded in ripping out many if not all of the heinous social obstacles of the past. Three generations of women examine the complex interrelationship of dreams, choices, responsibilities and consequences applicable to human beings of all sexes.

But this company is unable to make any moment credible; everyone is always clearly Acting. Perhaps that was an intentional choice to emphasize the humor, but in this production, it’s nearly impossible to figure out whether we are supposed to treat seriously navel-gazing seminar themes like “Torture, Horror and Sadistic Pornography” or whether they are meant to be satirical or both or neither. If these extended sessions are meant to be one big joke, not to be taken at all seriously, they certainly go on a long, long time.

The second are scenes of interpersonal relationships played out by lost troubled people trying to cope with the fallout of their decisions.

When done well, and we’ve seen it done well, the result is thought-provoking, moving and suffused with the dark humor of whip-smart people who got what they wanted and now question whether it was what they really wanted or what they should have wanted—a kind of emotional and social version of buyer’s remorse.

The plot posits a reunion of three college friends 21 years later. Catherine (Amanda Ortega) is a brilliant analyst-writer about social issues who has built a high-profile career, but has foregone a conventional family life. Her ex-roommate Gwen (Laura Argo) is an open-hearted convention-bound stay-at-home mother who dropped out of college and abandoned her dreams of a challenging future. Gwen married Catherine’s soulmate Don (Juan Gamero), a once-promising ne’er-do-well who has become a college administrator and given up teaching or writing.

Catherine, who has been out of touch most of these years, has returned home to the trio’s New England town ostensibly to care for her mother (Lory Reyes) who has suffered a heart attack but who remains pretty feisty with a desire to be independent.

Don gets Catherine a job teaching at his college, so she can pay her bills. But she needs something this summer to keep her mind alive, so he arranges for her to run a seminar on feminism in her home. For a summer test drive for the course, it attracts only two students: Gwen and 21-year-old Avery (Kaitlin Svadbik), an up-to-the-millisecond denizen of the current generation (and who Gwen fired as a babysitter).

Fueled by a considerable flow of martinis (other than Gwen who is a recovering alcoholic), the three women dive into a series of seminar discussions about feminism. Avery has no connection with the visceral sacrifices that past generations made to provide Gwen and Catherine their options. That allows her to blithely slice through the myths and rationalizations that have accumulated around the feminist movement. With scalpel-like clarity, she bemusedly deconstructs feminism as quaintly foreign as artifacts found on an archeologist’s visit to a primitive culture. The past has little relevance to how she will live in the present and future. It’s doubtful she knows who Minneapolis’ Mary Richards was.

It would take numerous paragraphs to adequately encompass these debates, but they touch on an ocean-wide array of topics ranging from marital politics to porn—a lot about raunchy porn. The three debaters (plus Mom as a frequent interloper) send ideas clashing, spinning and turning them on their heads under cross-examination. For instance, discussing slasher movies, one person reiterates that the movies are men vicariously punishing women victims for their new-found independence, unless some man rescues them in the last reel. But another woman argues that the last survivor in the last frame of most films is a woman who has defeated or at least survived every monster due to her own skill, courage and hardiness.

Ideas spin like electrons racing around a nucleus: sex, the possible death of a mother, alcoholism, fear of failure, fear of success, fear of relationships and trying to cope with lost dreams of the future and yet still forging ahead today.

Rapture is not meaty; it’s a nine-course gourmet banquet. It’s almost too much. Many patrons are going to feel overwhelmed and even left behind by the seminar scenes with their whitewater torrent of ideas blurring into intellectual babble.

This isn’t a bloodless academic exercise to the protagonists or us because these ideas are clearly expressions of their life experiences, and because Gionfriddo, a longtime writer and show runner on TV’s Law & Order, illustrates the consequences that these philosophies have had on their lives.

The actors and the play improve by inches through the evening and hits what stride it can in the second act when human emotions finally take a little precedence over the sociological discussions.

But among the most glaring problems, director Danny Nieves allows Gamero to play Don like a cartoonish self-involved slacker jerk so over the top as to strain credulity. There is no educational institution imaginable who would hire him as a dean, or that either women would remain remotely infatuated with him, as the script suggests.

Credit the actors who had to memorize the reams and reams of this material and Nieves for molding this effort, presumably a short period of time.

The good news is that Main Street Players has survived the loss of its venerable storefront venue. It has moved one block west into another storefront. The house is a little bit smaller, the stage is a little narrower but a bit deeper, and the stage lighting is better. The stage platform, is low so the company is building risers for the seating.

COVID Protocol: Masks are not required.

Rapture, Blister, Burn runs through May 15 at Main Street Playhouse, 6812 Main St., Miami Lakes. Tickets are $30 general admission and $25 for students, seniors and military. The running time is 2 hours 36 minutes with one intermission. Visit mainstreetplayers.com.