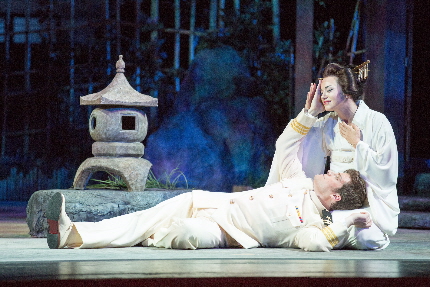 In the post-modern cynical world of 2014, no one should be able to make the ludicrous thrust of Puccini’s quaint 1904 Madama Butterfly even remotely credible, yet Florida Grand Opera’s 74th season opener produces a perfectly plausible tale of an abandoned woman’s impossible devotion to a love unworthy of her goodness.

But frequent FGO visitor Kelly Kaduce on opening night was so enchanting and convincing that the audience could not help but be moved. Her expressive voice and sheer acting skill were so organically infused that it rarely seemed like a performance.

From her first appearance, her Cio-Cio-San exuded a radiance, grace and joy that seemed both natural and yet otherworldly in its purity and just plain decency. Having sung the role three times before, she simply inhabited Butterfly, making the character’s decision to commit suicide – risible in a naturalistic 21st Century sensibility – believable.

Madama Butterfly is often produced as “Grand Opera” with massive weight and portentousness. But New York director Mark Astafan in his FGO debut and Conductor Ramon Tebar opt for a more intimate vision that focuses on relatable people as much as outsized passions. Significantly, when Butterfly bows, it is just a slight bend of one knee and a tilt of the head.

Perhaps because Kaduce is so impressive, the serviceable Martin Nusspaumer comes off decidedly more bland and artificial as the faithless Pinkerton. Only in the last act when Pinkerton realizes his heartless calumny does the tenor finally show a spark and gravitas.

Kaduce will alternate performances with Vanessa Isiguen, and Nusspaumer switching off with John Pickle, the alternates making their FGO debuts.

The orchestra is in superb form with a sound as bright and clear as a triangle in the first act and sounding like the swelling ocean in the second. Few CDs, MP3s or DVDs capture that full rich sound of a live orchestra playing at the peak of its powers.

The production is supported by notable performances from Caitlin McKechney as the loyal servant Suzuki, Todd Thomas as the compassionate consul Sharpless and Daniel Bates in his FGO debut as the marriage broker Goro.

This oft-rewritten and much adapted work demands the audience give itself over to a tragedy of a woman who instantaneously gives her love totally and profoundly to a stranger, and then remains faithful despite every warning sign. The story is the weakest element, as viciously but accurately discredited in David Henry Hwang’s play M. Butterfly. You spend much of the last minutes wishing Cio-Cio-San would take that ceremonial dagger and stab Pinkerton rather than herself. (Oops, spoiler alert)

But the librettists, the original playwright David Belasco, the original chroniclers and Puccini who wrote five versions of the score all correctly counted on one dream in the audience’s heart: the beauty inherent in the ideal of complete unwavering faith. Kaduce and company deliver that, nowhere as movingly as Kaduce’s impeccable Un bel dì (“One beautiful day”) as she imagines Pinkerton’s return.

One scene of note occurs when Cio-Cio-San keeps vigil overnight waiting for Pinkerton to return. It’s a long, long scene — longer than it needs to be – but lighting designer Kenneth Yunker charts the sunset, the emergence of stars in the night sky and then the inevitable sunrise with its metaphorical light of truth. But more telling, at least in row G, was Kaduce’s face which steadfastly maintains its hopeful gaze at the horizon, then undergoes flickers of doubt, then banishes those doubts, then struggles with the possibility of betrayal, then rejects it, and then finally reflects how life itself leaves her face frozen when she is forced to accept Pinkerton’s abandonment.

This is FGO’s record-breaking 12th production of what is currently the seventh most performed opera in the world, notable for its gorgeous and unusually accessible score, even for opera newbies.

FGO recently revealed that it has not had a balanced budget since moving into the Arsht Center in 2006. It had accumulated a $19.4 million deficit until recently when it sold off $19 million worth of properties including the Josephine Leiser Center in Fort Lauderdale. It also trimmed its staff from 40 to 18, cutting its annual operating budget from a high of $22.2 million to $9.7 million, and cutting back both the number of operas in its main season and the number of performances.