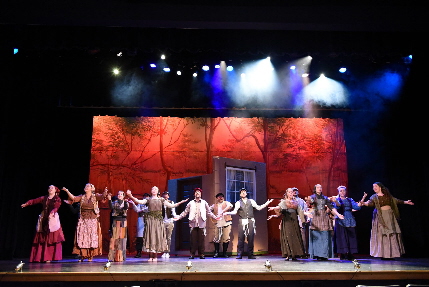 The inescapable thought at the end of Marquee Theater Company’s enthusiastic, sometimes moving, sometimes amateurish production of Fiddler on the Roof is that you wonder whether Tevye’s family of refugees would be as welcome today on Ellis Island as they were back in turn of the century America.

A magical quality of this half-century-old musical is its universality and persisting relevance. Fiddler is almost indestructible because it plugs deeply into the immigrant sensibility and because it depicts the struggle between traditions versus changing mores – both themes that resonate in 2016. When the first production toured Japan, patrons told producer Harold Prince that they were amazed that a westerner could understand the Japanese mind so perfectly.

So when the young Boca Raton company’s production finds the groove, it’s entertaining on its own merits; when it falters, the material is so strong that it carries the decidedly uneven show.

The yin and yang can be seen often: The comic number “Do You Love Me” is surprisingly sweetly funny and even touching; the classic “Sunrise, Sunset” emotionally lies lackluster like a limp rag. The Bottle Dance at the wedding is rousing, the pogrom that follows it falls flat. The opening number “Tradition” is flawless and exhilarating; the penultimate “Anatevka” (and this is a challenge to any production) just peters out.

And sometimes it all comes together perfectly: Tevye collapsed by his cart, mourning the loss of his disowned daughter Chava as Meghan Frost performs a lovely swirling dream ballet. 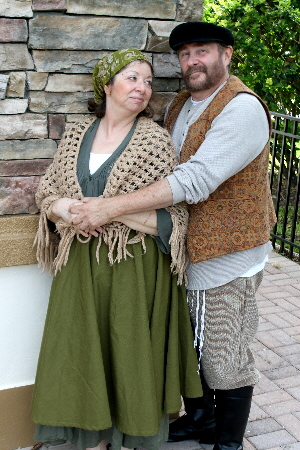 The production directed by Andrew Shultz and choreographed by Ben Solmor, Marquee’s founders, requires and thank goodness has two solid leads: Peter Librach as an ebullient Tevye whose gusto is chastened by the events but remains indomitable, and Joanne Schultz, whose three previous outings as Golde give her a confidence to simply inhabit the pragmatic peasant wife and mother.

These two vets have a perfect grasp of the rhythms in Joseph Stein’s script, especially when it comes to the classic roots of the comedy. When Golde and Yente (Vicki Klein) discuss a potential match, they may sound a bit anachronistic like two outer borough condo commandos at a canasta game at Century Village, but their timing is pure Broadway comedy.

Of course, it all hinges on Librach who has been an actor and producer in professional and community theaters for decades with varied success. But he was born for this role and he gives it everything he has learned in his career. He may not have the God-given charisma of a Zero Mostel, but Librach wins over the audience from the moment his bearded teddy bear appears with zest, honesty and downright likeability. Even more laudable, Librach creates a Tevye who seems like a real person, even though he is written and usually performed as a musical comedy character. So when Librach agonizes and writhes trying to navigate the changing landscape, the audience feels for him.

Several others are competent actors including Murphy Hayes as Lazar Wolf, Shultz doubling as the milksop Motel the Tailor, and Erica Rose Dade providing a vibrant Tzeitel.

Almost everyone has a strong capable voice that does not disappoint patrons who have played the original cast album for decades and may have been in productions themselves. Maybe it’s the fact that most audience members know Jerry Bock’s score by heart, but Sheldon Harnick’s lyrics seemed as cleanly and clearly delivered as anyone could hope.

In fact, musical director Paul Reekie has elicited some truly fine work, such as when Caitlin Frost as Hodel shatters hearts with the finest solo in the show, “Far From The Home I Love,” capturing the wrenching angst of a young woman torn between her home and her lover.

Solmar is capable of complex choreography when he has the performers to execute it, as he showed in last season’s Songs For A New World. But he’s also deft providing visually satisfying but relatively simple moves for ensembles with, shall we say, varied levels of expertise. Solmar, who also serves as the titular fiddler, once again subtly augments the ensemble with his own terpsichorean performance, like Hitchcock appearing in a cameo in his films. But Solmar is such a fine dancer that he stands out even when trying to hide in the back. The only time he intentionally takes the spotlight is in the Bottle Dance in which he justifiably is taking a kind of bow for his work.

But sometimes the production exposes its status as a nascent evolving company with a limited budget. Three of the dancers in the male ensemble are obviously young girls wearing, I’m not making this up, fake beards and moustaches. Some of the younger actors are not very convincing in their performances. In one sad scene, an actor is grinning like he’s at a birthday party.

If there is a disappointment, it may lie in the challenge of the material itself. Even though Fiddler has serious themes and pathos, it’s still a Broadway musical from 1964. Marquee’s production is a presentational Musical Comedy, happily relishing the Big Numbers and Iconic Moments. Every possible moment has choreography. It’s “a show.”

But the best productions communicate the sense of a troubled world unravelling and that dependable pillars against uncertainty are eroding. That sense only exists in the words the actors say here, but not in the vibe coming across the footlights.

The sole exception is when Librach is wrestling with his daughters’ tradition-challenging choices of beaus. Each time, he ends his interior argument yelling to the sky, “Tradition” as a desperate call to something cherished and relied upon that is evaporating into the mist.

To watch his oft-tested trust and hope beginning to weaken – and then to see it reassert itself later – is a testament to the enduring strength of the human race and Fiddler on the Roof. 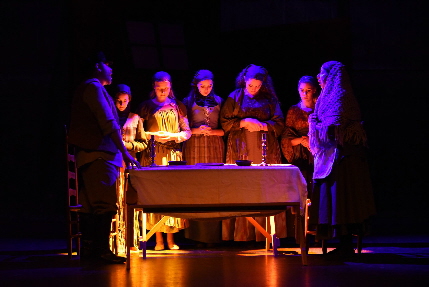