Why Not? With Nixon: A Navel-Gazing Comedy Best Suited For Mad Cat’s Cult Faithful 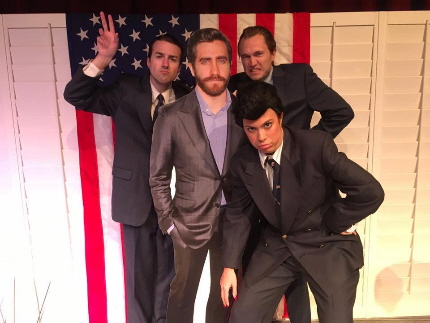 Cliff Burgess, left, Noah Levine and Jessica Farr surround a lively guest in Why Not? With Richard Nixon from Mad Cat Theatre Company

There’s a play, somewhere, in the story of Richard Nixon’s sojourns at the so-called Florida White House on Key Biscayne. He visited the compound at least 50 times during his presidency, where he was often one step removed from mob dealings with the likes of Meyer Lansky. Nixon’s confidant and go-between, the crooked bankster Bebe Rebozo—a name culled from pulp fiction if ever there was one—was by some accounts more than a best friend to the 37th president: “Did Richard Nixon have a gay affair with a Mafia fixer?” blurts a 2011 headline from the Daily Mail.

Mad Cat’s Why Not? With Richard Nixon builds from the Nixon/Rebozo rumors and is set in the Key Biscayne property, but it’s decidedly not that play. There are actors and a stage and there is written material, but other than that, I’m not sure it is a play. A cult comedy sketch is a more apt description of director Paul Tei’s latest example of experiential vaudeville. And while it works in spots and soars in others, it just as often wanders into inertial dead zones, the result of an amusing concept extended beyond its means.

Working from material co-written by Tei and fellow Mad Cat company members Jessica Farr and Theo Reyna, Why Not? is an update of a workshop production that premiered at the Fillmore’s Gleason Room this past April. It imagines an exiled Nixon (Noah Levine), still alive in 2016, still embattled, still paranoid, still square, whiling away retirement by hosting a late-night, lo-fi public-access show with sidekick Rebozo (Cliff Burgess). His daughter Tricia (Farr) produces the program and provides cheesy musical accompaniment from her station at a Casio.

This being election season, Nixon’s slated guests for this edition of Why Not? are Donald Trump, Hillary Clinton and Jake Gyllenhaal, not all of whom show up. Many of the political jokes have the fresh patina of material written yesterday, even if one wishes for a higher level of sophistication. For every creative description of Trump’s appearance or pointed Clinton dodge, there’s a scatological detour or a secondhand riff—a line about Bernie Sanders combing his hair with a balloon was stolen, consciously or not, from Bill Maher.

But the show’s most effective satirical target is ultimately not our gonzo political season but the decaying format of late-night talk. While it’s easy to pick on budget-less cable-access self-indulgence, Tei’s ironic skewering of its conventions can be infectious, from Rebozo’s pathetic attempts to “warm up” the crowd with standup comedy to the interstitial PSAs, Spanish-language commercials and South Florida-centric jingles that divide the show’s segments.

Like Jimmy Fallon, Nixon engages his guests with asinine games, including “Fuck/Marry/Kill” and “Movie Mashup,” complemented by loopy musical punctuation. Tei’s set design is hilariously schlocky, including a fake grass plant between two leather chairs, a battered standee of Gyllenhaal and a rumpled American flag, bunched upstage, that never unfurls.

For his part as the show-within-a-show’s Ed McMahon, Burgess looks the part of an aged-down mobster, costumed in a three-piece suit of clashing browns and yellows. He wears the plastered smile of a glad-handing yes-man, in a role that is well considered if not particularly challenging. Farr, clad in a dated peroxide wig, plays Tricia Nixon like an abductee in her father’s mad experiment, hopelessly captive to his wayward whims. But for sheer comic lunacy, her finest hour arrives in her portrayal of Hillary Clinton, a surprise that I couldn’t describe if I wanted to.

If there’s a stilted twinkle in these performances—the sense that both actors are in on the joke—this never quite manifests in Levine’s Nixon. His caricature of this most imitable of modern presidents is full of hunched scowls and blubbering jowls, but it’s his poker face that best sells the character. His lines often sound improvised even when they aren’t, and his choices—idly sprucing up the ersatz houseplant, adding a bloated acoustic guitar outro to a Gordon Lightfoot song he performs—regularly enhance the scripted material.

Why Not? With Richard Nixon ultimately doesn’t know where to take its conceit. If it starts off more Upright Citizens Brigade it ends too Saturday Night Live, a work in progress wilting on its vine. This is not to say the show won’t have its fervent proponents. Why Not? is perhaps Mad Cat’s most Mad Catty show ever, a production for company insiders that is esoteric enough to reference another Mad Cat show in its text. If you feel invited to this self-contained world, you’ll have a blast; if not, you may feel you’re observing a bubble you can’t enter, looking at your watch and waiting for it to pop.

Why Not? With Richard Nixon runs through Oct. 9 at The SandBox at Miami Theater Center, 9806 N.E. Second Ave., Miami Shores. Shows at 8 p.m. Thursdays to Sundays. Tickets cost $15-$30. Visit madcattheatre.org.