Fiddling About: The Maltz Again Reinvents A Classic Musical

Posted on December 5, 2014 by Bill Hirschman 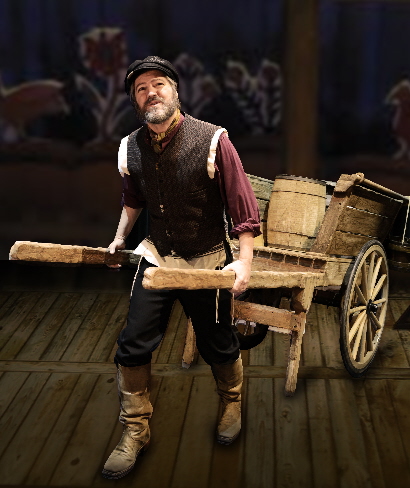 Director Marcia Milgrom Dodge and the Maltz Jupiter Theatre pulled off a minor miracle a couple of seasons ago when they triumphantly deconstructed, reinterpreted and rebuilt Hello, Dolly! without a visible shred of Gower Champion’s vision or Carol Channing’s outsized persona.

They’ve tried it once again with a 50th anniversary production of the indestructible Fiddler on the Roof, getting permission to jettison most of Jerry Robbins’ unforgettable choreography and iconic staging.

This time they haven’t been quite as unassailably successful, but the overall evening grows on you as it swells into a moving second act, in part because the music, lyrics and script are so strong that it cannot possibly fail when executed by such a first-rate cast and creative team.

The problem is the Robbins’ vision (seen by millions of people in New York and on the road and used as the template for most revivals) is, indeed, iconic – indelibly so. So it’s very hard, in fact it takes much of the first act, for anyone who has seen it before to appreciate what Dodge and company are doing on their own merits.

What they have produced is a quieter, more introspective, less broadly comic retelling. Even if that is valid and entertaining on its own terms, it’s overshadowed by memories of more vibrant, less subtle productions.

This one is also blander. Yes, this is a universal story that any person of any background can relate to, but this production feels ethnically-bleached. There is very little flavor of a 1905 Jewish community in a rural Russian village, and that specificity long ago was identified as what makes the show work.

Perhaps the 1964 Robbins production was unrealistically overlayed with the stylized culture of New York City’s Lower East Side and the echoes of Yiddish theater as it seeped into the national language of vaudeville and then Broadway. But most of this is hard to find in this borderline goyish first act.

The other problem and simultaneous blessing is Robert Petkoff as the beleaguered hero Tevye. Petkoff clearly is a highly skilled and nuanced actor who excels when Tevye is struggling with the erosion of his way of life as three daughters’ choice of husbands encroach on his traditions and his faith. But Petkoff is not a charismatic force of nature full of brio like (we’ve been holding off saying this) Zero Mostel, Herschel Bernardi, Harry Goz or even the salt of the earth Chaim Topol (who wasn’t very good on stage on tour). The first act requires a God-given magnetic personality to carry the audience regardless of whatever is occurring on stage. Petkoff’s amiable, genial Tevye is the milkman-next-door not a memorable character of literature. This works in its own way especially as we adjust our expectations, but it’s hard not to hear Mostel’s line readings from the original cast album. When Dodge reinvented Hello, Dolly!, she had the vivacious Vicki Lewis holding down the fort.

That said, Dodge, Petkoff and everyone else involved are too skilled not to mine everything else expertly in this masterwork with a criminally under-rated book by Joseph Stein and a justifiably revered score by Jerry Bock and Sheldon Harnick. For instance, when Mostel and others have sung “Sunrise, Sunset,” it’s charming, even a bit touching. When Petkoff sings the opening stanza, it comes straight from his heart, giving it a welcome freshness. It’s not clear who did the orchestrations, but under musical director Helen Gregory, the utterly familiar score sported that sparkling newness throughout.

By the second act, tear ducts were flowing and throats closing up when Hodel sang “Far From The Home I Love,” when Tevye refused to speak to Chava and then mourns her, and the finale that dramaturgically absolutely should not work in a musical comedy but which lands perfectly in Dodge’s hands.

Dodge has a nice eye for subtle detail: During the scene in which households around the village are lighting Sabbath candles, the wealthy butcher Lazar Wolf has invited Nachum the beggar, and Yente the widowed matchmaker lit the candles alone.

While Robbins’ choreography would seem irreplaceable, Dodge spiked that expectation, even without the bottle dance. With the advice of dance research consultant Walter Zev Feldman, she created her own movement vocabulary and configurations. Much of it were infinite variations of Hora and Sher line dancing. But as an unexpected treat, she inserted in the wedding celebration a Broygez Tanz pantomime dance traditionally performed by the mothers of the bride and groom in which they mime quarreling and then reconciling. Her staging of the “Chavala” memory ballet is especially poignant as a young stand-in for Tevye plays with his young daughter in the past, echoed by the movements of the grief-stricken Tevye in the present.

Troy Hourie’s visual design eschewed Boris Aronson’s take on Marc Chagall’s paintings. Instead, in concert with Dodge, he forged his own path, further underscoring independence from earlier productions. Their theme was folk art paintings daubed on stage-high wooden slats with miniature houses in the background to represent the village – buildings that are inventively employed in the finale. A nice touch occurred in the second act when the world is falling apart around the village, some of the planks were removed. The only false note: Who the hell thought Pepto Bismol pink was a wise color choice for those tiny buildings? Repaint them tonight! The costumes by Gail Baldoni are effective, although, again, there are some strange color choices that don’t exactly scream Russian peasantry. The sound by Marty Mets is quite good but Paul Miller (who normally does a fine job) delivered a pedestrian lighting plot.

Most of the large cast did not give off a shtetl vibe, but they were uniformly solid actors and singers including Tia Speros as Golde, Susan J. Jacks as the voluble Yente, Bill Nolte as Lazar Wolf, Sarah Stevens as Tzeitel, 17-year-old Maltz veteran Emily Rynasko as Chava and especially Hannah Freeman whose lovely voice as Hodel elevated every musical number. A nod, too, to whoever it was playing the ghostly Fruma-Sarah. For the civilian, the actress’ name in the program, Georgia Spelvin, is the joke name traditionally given when someone else in the cast or a surprise actor is playing a role. The photo in the program is of the actress Irene Ryan, who created a scholarship for actors and who like Fruma-Sarah is dead.

Despite its shortcomings, all is forgiven when Dodge, Gregory and this cast combine to deliver the Bock-Harnick score. Whenever that happens, it’s all kosher.

Side note: Doing a bit of research I found this on Wikipedia: In 2011, Sheldon Harnick wrote two versions of Sunrise, Sunset suitable for same-sex weddings, with minor word changes. For example, for male couples, changes include “When did they grow to be so handsome.” 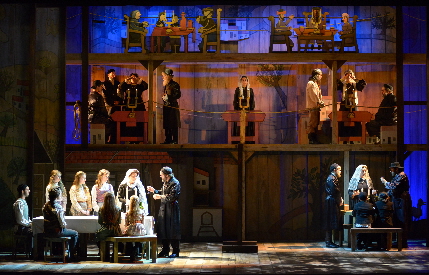