Posted on December 6, 2014 by Bill Hirschman 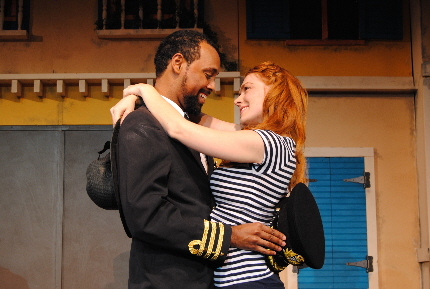 On a trip to New York last season, we saw Lincoln Center’s lushly produced, visually striking but cripplingly flawed Macbeth starring the estimable Ethan Hawke. The lesson there: Shakespeare is the Everest of mainstream theater; not every attempt, even by experts, reaches the summit.

Audiences need to savor the undeniable virtues and achievements — even when counter-balanced by well-intentioned even courageous but equally undeniable flaws and shortcomings.

Such is the case with the laudable Outré Theatre Company production of Othello imaginatively directed by Christina Groom, and featuring Troy Davidson in a persuasive performance that brings credibility to the sadistically difficult role of a man insanely in love with his wife one minute yet easily duped the next into believing her unfaithful.

But once again, once again, once again, Shakespearean verse is a bitch. It requires a specialized skill set that only a few people in this region possess. The ability of various members of the Outré troupe to navigate the Yoda-like sentence structure, communicate the meaning behind the archaic vocabulary, to embrace the music of the language without getting mired in it – let’s say politely that some folks are a lot better at it than others.

On the credit side of the ledger, Groom and her cast have thrown their heads, hearts and souls into this scaling of the mountain. As a result, this production is superior to most of the other Shakespeare we’ve seen in South Florida other than New Theatre’s fine Hamlet in 2002.

Groom has ingeniously reset the play in war-torn 1950s Cyprus, which is as valid as Ian McKellen resetting Richard III in a fascistic Edwardian England.

Its major asset, thankfully, is Davidson. He has long been one of those really talented performers yet to be recognized by mainstream audiences. Much of his work has been with the Mad Cat Theatre Company and with the former PlayGround Theatre productions for young audiences.

From the moment he enters with that stately dignified mien, heavy-lidded eyes and confident smile, the production elevates several notches. His resonant baritone caresses the Moor’s longer speeches with an analytic intelligence and a contained passion. Davidson makes believable the tough transition as Othello’s adoration for Desdemona is visibly infected by doubt and then blossoms quickly into a murderous volcanic rage. His eyes bulge and burn as if his very insides are on fire.

The lovely Faiza Cherie with her flowing red hair has developed a reputation for dependability, notable for her recent work in Island City Stage’s The Pride. Desdemona is another of Shakespeare’s underwritten ingénue roles that requires an actress to work overtime to make the character credible. Fortunately and miraculously, Cherie is capable of making believable Desdemona’s deep and steadfastly abiding love even as her beloved unjustly accuses her of being unfaithful, a patently ridiculous suspicion. Without seeming a dewy naif, Cherie’s eyes brim with bewilderment and pain at this inexplicable change in the man she loves.

Skye Whitcomb, the company’s artistic director and a skilled director himself, takes on Iago with mixed results. He’s comfortable with the language and confidently communicates to the audience that he has sussed out the meaning of every word of his lines. What’s crucially missing is Iago’s curdled soul and manipulative genius that makes it clear from the opening moment of the play that the warrior and tactician Othello is way outclassed, even doomed by Iago’s malignant intelligence.

Rayner G. Garranchan, who was so good in Outré’s recent Back of the Throat, is Cassio and Seth Trucks is Rodrigo, both played so broadly that they were disruptively unconvincing.

But other than Cherie, everyone in the cast including Davidson was “performing Shakespeare” rather than inhabiting real people trapped in extraordinary circumstances. This can work when a cast is well-schooled in an intentionally classical style, but very few actors in this region have that esoteric skill set honed enough to pull that off. One of the glories of Kenneth Branagh’s Shakespearean films is the ability to believe these people uttering such stylized speech are human beings we can relate to.

The biggest problem, and it’s major, is diction and speed. Davidson, Cherie and Gore are the only ones who do not at some point garble their words. The actors are racing to get out of their mouths those words they have worked so hard to memorized, powered (they think) by their character’s anger or fear or anxiety. The result is oft-recurring spikes of unintelligible jumble. Much, much worse, these folks are spewing verbiage so quickly that they fail to communicate the subtle, multi-faceted ideas behind the words. All you get is a single blunt underlying emotion. This is underscored when any of these actors actually slow down to deliver their lines. Suddenly, the brilliant ideas and music of the language appear.

It’s understandable that Groom has not slowed them down. This show clocks in at three hours including intermission, and that’s with some deft script cutting by Groom. But audiences might accept another 10 minutes in the seats if they could understand what was being said and what it meant.

Groom, it must be said, is one of the best actresses in the region and, frankly, one of the few proven regional talents in Shakespeare, as seen in her turns as various characters in New Theatre’s Henry V in 2011. She’s directed some Shakespearean comedy and we want to see her do more.

Her background includes seasons with the Laffing Matterz improv troupe and she has a real flair for some welcome comic staging. But while Shakespeare famously inserted comic relief in Hamlet and Macbeth, perhaps there’s just a bit too much broad comedy inserted here just a little late in the proceedings, undercutting the tightening noose of tragedy.

She’s hampered visually by the platform stage at the Abdo River Room at the Broward Center, the new home for Outré, which had been based in Boca Raton. It isn’t very deep, so many of her stage pictures are one-dimensional with characters arrayed across the stage in a single line or they stand talking to each other in profile. On the other hand, she offsets this by having them move around a good deal, providing some kinetic energy to the talky proceedings.

You have to give props to Groom, Outré and the cast for a noble attempt that has honestly praise-worthy elements. Besides, many would contend that flawed Shakespeare is better than no Shakespeare.