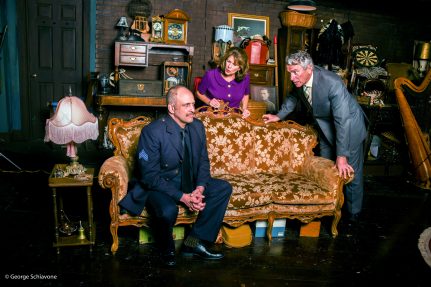 GableStage’s beloved producing artistic director Joseph Adler died in April 2020, shortly after his direction of The Price was cut short by the pandemic. This fall, his successor, Bari Newport, took his notes, some of his cast, creative team and the still standing set as a foundation and infused it with her own sensibilities and skills.

Let’s cut straight to what you want to know: The season-opening production that bowed Saturday night would make Joe proud. Real theater. Classic theater. Theater to make you think about your own lives as you drive home.

Newport’s agile insightful direction of four superb actors working at the considerable top of their game navigates Arthur Miller’s incisive but Byzantinely dense story of unresolved sibling strife of the past that has crippled their present and likely dooms their future.

Blinded by rationalizing self-deceptions – there are layers under layers of misperceived but totally believed “truths” — the protagonists are paying the price for poor choices, mistrust, guilt, doubt about what to believe, paralyzed development, pride, blame and several other human frailties. Only the audience leaves the evening with a relatively objective comprehension of the Truth.

This is pulled off with such skill that most of the time you forget you are watching a group of artists delivering a carefully constructed fiction; you are immersed in a theatricalized reality.

The 1967 script opens with Victor (Gregg Weiner), a nearly 50-year-old cop beaten down by life, frustrated in a dead-end job and struggling financially. He surveys the attic of a Manhattan brownstone where his father died 16 years earlier. The vast room is impossibly crowded with the detritus of his troubled family’s life there – everything from a cracked harp to a fencing foil to a wind-up Victrola with a comedy record by a vaudeville team. The building is about to be torn down and Victor wants to sell the contents as a whole – jettisoning reminders of interlocking family tragedies, especially his father’s economic, physical and mental collapse along with the 1929 stock market crash.

With the urging of his wife with a drinking problem, Esther, (Patti Gardner), he has called in a used-furniture dealer to evaluate the morass. Since their father’s death, Victor had been trying in vain to reach his seriously estranged brother, Walter (Michael McKenzie), a smooth well-off surgeon, to split whatever cash might result.

The dealer arrives, Gregory Solomon (Peter Haig), a gnomish wily wizened old conman-philosopher. The two men negotiate at agonizing length as the garrulous Solomon sidetracks the discussion with storytelling and belittling the sellability of the items. Just as cash changes hands, Walter appears. From then on, the two battle over poorly paved over recriminations.

The practical Esther is desperate to get Victor to make the most of the situation because her husband’s life has slowed to a crawl. “Some men don’t bounce,” she says of her husband. Part of her frustration is that she is a classic ’60s loyal housewife, intelligent, insightful, capable but with no real life of her own outside of being “stuck” inside Victor’s self-imposed rut

Charges fly back and forth, perceptions are disproved and it becomes clear that neither man is quite what we first assumed by their demeanor. The truth is likely irrelevant because even post-revelations, they stick with the fables they have invented.

It’s no spoiler–  because this is the playwright of Death of a Salesman, The Crucible, All My Sons and A View from the Bridge — but this isn’t going to end well. And yet, character-driven humor suffuses much of the evening.

All the actors occupy their characters, but the standout is Haig, a veteran absent from local stages for way too long. With his trademark voice – sometimes high and scratchy, sometimes low and growling — Haig creates a comically crusty codger, a canny pirate with a Mittle-European/five-borough accent relating an endless array of improbable life stories. It’s Haig’s inventiveness that makes Solomon’s incessant delaying detours welcome even when Miller debatably has Solomon constantly interrupt the flow of negotiations or worse the brothers’ clumsy attempts to straighten out their differences.

McKenzie’s Walter initially comes across a silver-haired self-assured professional with polish, vibrance and a camel coat. But he convincingly charts the hardest of Miller’s reveals as his exterior erodes until we see a man who recently discovered the profound failings in his life, revelations that make him tell Victor that he envies his “real life.”

Unlike some past productions, Gardner makes Esther as major a player in the tumult as the others. She is passionately, even desperately trying to get Victor to take advantage of a rare opportunity to free himself. It’s true of everyone here, but Gardner is especially invested in every moment of the piece whether she is the focus of a scene or not. In one scene while her husband is holding forth, one brother touches her shoulder affectionately, but she glances to the side to see if the other brother noticed. Gardner deftly creates the logical practical part of the couple, simultaneously an equal part of the marriage yet restricted by her husband’s fragile ego and the June Cleaver expectations of the 1960s.

And Weiner, returning from New York to the stage he has commanded many times for Adler, inhabits a square-shoulder blue collar man who is seemingly burned out by his job, by his family past, and too discouraged to try to go on to a new more satisfying life now that he can retire.  He spends much of the first half of the play seemingly too beaten to take control of his life. (Miller will later question whether this is due to the vagaries of life or Victor’s own choices.) But in the second half brawls, Weiner’s Victor slowly ramps up unleashed anger as resentments and accusations pile up.

Crucial is the breath-taking environment by the GableStage stalwart set designer  Lyle Baskin and properties designer Beth Fath. As ghost-like sheets are pulled off furniture, the duo reveal a past made corporeal with piles of very specific bric-a-brac — much of it dictated by references in Miller script.

Newport says that about 40 percent of the staging is based on Adler’s notes and Baskin’s original set design. But the truth is that her own staging is textbook perfect, using the full expanse of the notoriously difficult wide and shallow GableStage stage.

One of Newport’s skills in past positions has been connecting with a community. Since arriving earlier this year, she has spent numerous months meeting with patrons and artists throughout the region. Indicative of that, the gregarious Newport has committed to meeting with patrons outside the theater for an hour before each performance. Additionally, the company will hold a discussion between the cast and the audience after the first Sunday matinee.

Side note: In the hope of selling tickets to people who are not comfortable being in the theater auditorium yet, the show will be streamed beginning Nov. 17 at the regular show time each night (not on demand). The cost is the same cost of a ticket for the show in the auditorium.