GableStage’s Ruined Is Powerful Tale of Atrocities and Suvival

Posted on September 9, 2012 by Bill Hirschman 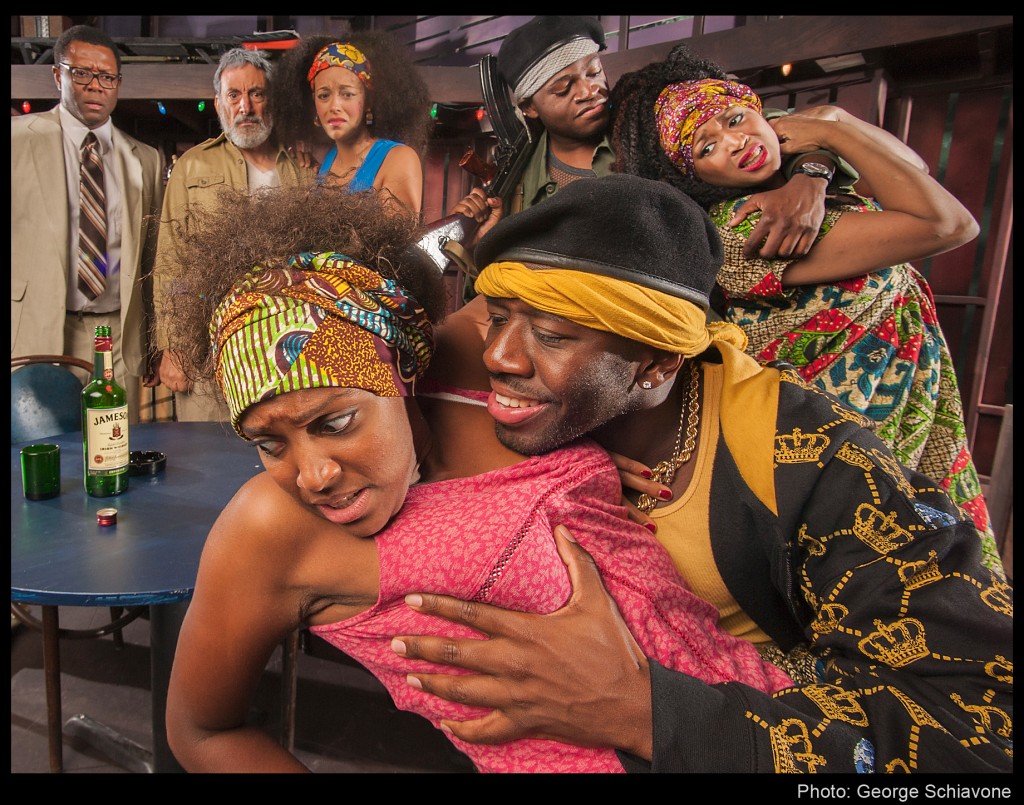 GableStage’s powerful Ruined examines our species’ simultaneous capacity for a bottomless cruelty absent in animals and an inextinguishable humanity that borders on divinity.

This engrossing rendition of Lynn Nottage’s play about people struggling to survive the hellish civil war in the Democratic Republic of the Congo also has a duality.

It is one of the finest pieces of local theater seen this season, featuring superb acting, notably from Lela Elam as an indomitable owner of a bar/brothel, and direction from Joe Adler that elicited those smooth performances.

And at the same time, while there are specific scenes that effectively wrench at the audience’s insides, overall, the script’s obvious potential to harrow the soul doesn’t break through. You are more likely to feel stunned by abstract knowledge made flesh rather than be emotionally devastated by the tragedy and triumph.

Nottage, who loosely patterned the work on Bertolt Brecht’s classic anti-war play Mother Courage and Her Children, jettisoned Brecht’s “distancing” approach in which the audience members are observers rather than being drawn into a cathartic purging. But, in fact, that sense of being once-removed is precisely the overall effect of this production, although neither Adler nor his cast stint on excavating the emotional marrow of the characters.

Adler deserves praise for committing to this production. The grave subject matter is unlikely to attract a casual audience. He has hired 13 actors, many of them Equity members, plus two musicians – the largest cast the theater has ever used. The set sprawls across most of the wide stage and the actors are garbed in more costumes than are used in some modern musicals.

The story is set in the watering hole and whorehouse run by Mama Nadi (Elam). It serves as an oasis of calm and camaraderie for a small village economically flush in the wake of a gold strike – even though warring rebels and government troops drop in as each wave passes back and forth through the suddenly valued region.

Mama is a proud tart-tongued survivor with a rhinoceros-tough skin, seeking only to make a profit off the business that she built from nothing. Although she wants to protect her stable of girls, her first priority unabashedly is self-preservation. “If we do well, everybody gets a little. If times are bad, Mama eats first,” she proclaims. Her pragmatism is overwhelming. She tells a would-be swain, “If you can’t place it on a scale, it’s nothing.”

But she reluctantly relents when Christian (Robert Strain), a black market salesman with a penchant for poetry, asks her to take in the waif-like Salima (Trenell Mooring) and Christian’s niece Sophie (Jade Wheeler). Sophie is “ruined,” a social classification of a woman so horribly violated with a bayonet that her vagina is no longer useable for prostitution. But it’s also a metaphor for a country and a humanity that seemingly has also been damaged past the point of reclamation.

“One day, it’ll be at your door,” a friend warns.  Mama responds with blithe defiance, “And on that day, I’ll close it.”

Sure enough, with the inexorability of a Greek tragedy, the disease of violence seeps through the slats of her tavern walls until it smashes its way inside to destroy her world.

Nottage went to Africa in 2004 and 2005 to research a play that might echo Mother Courage. Indeed, there are a half-dozen parallels such as Mama’s opportunistism, the ultimate tragedy in the plot and the ballads that Sophie sings in the bar that comment on the action we’re seeing. But Brecht ended his play with the image of humanity’s heroic but blind instinct to carry on despite crushing adversity. Instead, Nottage has a nobler world vision that encompasses the possibility of humanity finding that which lies inside them to make a conscious choice to rise out of the ashes.

Nottage deservedly won the Pulitzer Prize for Drama in 2009 with this work. Besides being a classically well-constructed play, her command of language is breathtaking. Many characters convincingly and subtly slip from vernacular into a heightened lyricism that subliminally evinces their finer nature. It is a shift in style from the author of GableStage’s Intimate Apparel and the Public Theatre of Fort Lauderdale’s satirical Fabulation, both mounted in 2006.

And while Ruined is clearly drenched in political and social issues, neither Nottage nor Adler are indulging in a didactic expose of human rights abuses. The underlying themes here about humanity transcend time and place.

Adler’s directorial style has rarely been about creating beautiful stage pictures or ingeniously moving people around the stage like chess pieces. His strength is nurturing actors to scrape the inside of their souls and lay it out for an audience to see. Nowhere is this more evident than in Mooring’s heart-rending recollection of Selima’s nightmarish months as the captive and unwilling sexual plaything of an army on the move. Adler and the actress deliver the tale with an anguish that lands the most moving scene of the entire evening.

Perhaps the real headline is the work of Elam and Adler in creating Mama. Unlike Brecht’s protagonist – an epic figure in an epic tale towering above an epic landscape of devastation – Elam’s Mama is a very human and recognizable in scale, which makes her someone we can relate to far better than some outsized heroine. It does force the entire production to scale back in tone, perhaps the reason that the impact of the evening doesn’t pack the emotional wallop that it might. But Elam and Adler convey a flawed human being rather than a symbol.

Elam, who won plaudits for her GableStage performance in No Child in 2009, may never have been better than she is here. She bravely embraces Nottage’s creation of a character at once vibrant yet controlled, uneducated yet street smart, selfish yet protective of her “family.”  Elam’s eyes convey wariness, defiance, anger, affection, even a flash of secret longing for another life. With a shake of her leonine dreads, Elam is equally commanding sternly restoring order among the chaos, at least among her girls, or staring down a soldier, insisting that if he is going to be a patron he must leave his ammunition magazines on the bar.

There isn’t a weak link in the large cast. Special mention is due Wheeler and Mooring. Wheeler here is unrecognizable from the self-assured lawyer from GableStage’s Race a few weeks ago and Mooring is an Orlando-based actress who was in Florida Stage’s last season opener, Cane.  Both play profoundly damaged victims who are understandably shell-shocked, yet they persuasively expose inner layers of determination and resolve despite everything that has happened to them.

The statuesque Renata Eastlick (Kiss of the Spiderwoman) exudes a magnetic carnality as Mama’s equally hardnosed second-in-command and chief earner, Josephine. The absolute abandon in which Eastlick/Josephine throws herself while nuzzling a patron or gyrating in a frenzied dance is stunning. But Eastlick also allows us to see Josephine switch gears when no one is looking and reveal a sullen contempt for her profession and her wounded pride at the comedown from been a chief’s daughter.

Robert Strain, also does some of his best work ever, inhabits the role of the cultured poetic soul reduced to peddling wares through the war-ravaged region.  Strain puts across the essential element of a character who is at heart a good human being trying to negotiate an unexpected life of wheeling and dealing for survival. It is his basic decency, which stumbles in the middle of the play but rises again later, that gives the play its moral center.

Noteworthy as well are other denizens of the bar: David Kwiat (Retreat From Moscow) as the dissolute white merchant dealing in minerals, Marckenson Charles (Superior Donuts) as Selima’s missing husband doggedly searching for the wife he betrayed, Keith C. Wade (Radio Golf) as the rebel army leader, and especially welcome home Sheaun McKinney (The Brothers Size) as the frighteningly mercurial and implacable gangster general of the government forces.

Mariah Reed Johnson has coached the actors in convincing accents with a soft exotic lilt that contrasts with the hard-edged strife outside. Although a few theater patrons complained opening night that they couldn’t understand some of the dialogue, the only time most people had trouble understanding words was the lyrics of songs that Sophie sang inside the bar. Those lyrics by Nottage are married to glorious music by Dominque Kanza played by the “house band” of Verdi M. Mayer Jr. on guitar and Maracuja on driving percussion.

Lyle Baskin has outdone himself with the set design, a two-story representation of the tavern and the upstairs dormitory. His design allows the verdant violent world outside to peek through the chinks in the slats of the walls. Baskin accents the scene with advertising posters and strings of Christmas lights representing the owner’s lame attempt to cheer up the environment. His work is complemented by Jeff Quinn’s atmospheric lighting, which once again focuses the audience’s attention in one part of the huge set. Ellis Tillman has clad the women in a riotous rainbow of wrap-around dresses and headbands made from African prints as joyously vibrant as the world outside is perilous.

Surprisingly, this season ender is far less emotionally cauterizing than you’d expect. But it remains a powerful evening that should not be missed.

Side note:  Almost all of the violence in this play occurs offstage and in reminisces, but the show provides GableStage with the opportunity to host a free panel discussion, “Representations of Violence in the Theater,” at 7 p.m. Wednesday, Sept. 12, at the theater. Participants will include Adler; Daniel Castellanos, professor and founding chair of the Florida International University department of psychiatry; Phillip M. Church, associate director of external engagement for the theater department of FIU; Christine Dolen, theater critic of The Miami Herald, and Neal Hecker, vice-president of programming of WPBT.