Get Swept Up In Hairspray At The Maltz Jupiter Theatre 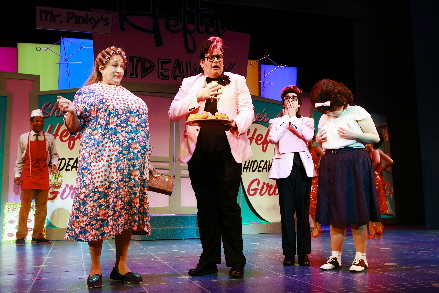 Big. Bawdy. Bold. Beautiful. Everything about the Maltz Jupiter Theatre’s Hairspray has volume, and then some . . . from the bubblegum-bright lighting design to overdrawn characters that, while definitely animated, never come off as cartoonish, to the Maltz’s always super snappy choreography that’s as perfectly coiffed as a beehive hairdo plastered with Aqua Net (a.ka. Ultra Clutch in the land of Hairspray).

Based on the 1988 cult film icon John Water’s movie, the musical is set in 1962 Baltimore, where a rambunctious and robust teenage girl, Tracy Turnblad (Mary DiGangi), becomes an almost overnight sensation to everyone’s surprise after auditioning for a teeny bopper dance show, a la Dick Clark’s American Bandstand. Here, it’s the Corny Collins Show. There’s more to it than that, however. While she’s a typical teenager, the times in which she’s blossoming are rife with strife. Baltimore has a deep divide, and it takes the chubby girl getting her spot on the very white “Corny” show to bring the issue of segregation into Maryland living rooms via television.

I must say that seeing the musical in the midst of headlines claiming that America’s president, more than five decades after this show is set, allegedly used the word S*hole to describe African nations brought the somewhat usually sugar-coated presentation of race relations in Hairspray to another level. (A Black Lives Matter sign shows up in the production during a protest, too. That activist movement didn’t begin until 2013, but the slogan drives the message home a little harder here, too.)

There’s a balance in Maltz’s Hairspray that teeters on just plain fun with a dab of poignancy thrown in, and it’s a credit to director Bill Fennelly, perhaps, who finds a way to slather on the schmaltz, while giving the audience more to chew on.

For the actors who follow that fine line and play it to a T, their performances have as much nuance as you can muster from this lightweight book. Let’s begin with the standout, Michael Kostroff whose Edna Turnblad has the depth of her EE bra size. (Catch Kostroff in movie theaters right now where he’s appearing in Aaron Sorkin’s film Molly’s Game, and you also may recognize him as slimy defense attorney Maurice Levy, his recurring role on HBO’s The Wire.) While the role, traditionally played by a man since drag queen Divine originated Edna in the original movie, was made memorable for the stage by the frog-throated Harvey Fierstein, Kostroff brings more of a gentleness to Tracy’s mom. Kostroff’s Edna is humble, sweet, and, genuine. And, boy, is he light on his feet. (At one point, the actor seemed to channel The Divine Miss M. Has he ever thought of doing drag as Bette Midler?). Divine, darling.

Other actors who mine the characters for gold include Mia Matthews as the Corny Collins Show’s producer, Velma Von Tussle, former Miss Baltimore Crabs, and pushy stage mother. Matthews’ stinging performance makes Velma every bit a Disney villainess, a cartwheeling Ursula who commands the stage in both her Act I solos “The Legend Of Miss Baltimore Crabs” and “Velma’s Revenge.” Austin Holmes is a triple threat – acting, singing, and dancing up a storm as Seaweed Stubbs, making his Maltz debut in a role he performed previously at Syracuse Stage; Philip Hoffman as Wilbur is so engaging as the Steve to Edna’s Edie in the soft-shoe “You’re Timeless To Me;” Zane Phillips is perfectly princely as Link Larkin, and Chelsea Turbin  is the absolute Mean Girl, Amber Von Tussle. Taylor Quick slathers on the ditz as daffy Penny Pinkerton, and Lauryn Owen brings a sweet shyness to the role of Little Inez. Bringing down the house in Act II for the gospel-inspired “I Know Where I’ve Been” is Altamiece Carolyn Cooper. Other leads include Lukas Poost as Corny Collins, and Jeanne Bennett, in multiple roles, from gym teacher to prison matron.

As for the teenager at the center of the show, Tracy Turnblad, Mary DiGangi has played the role twice before, and that could be what accounted for what seems like a syrupy, surface portrayal. However, DiGangi’s energy is as electric as the multi-wattage lights on stage, which more than makes up for any other short falls.

Also in the wish department – had the dream sequences been a bit more, well, dreamy, it may have added some modulation in this show, which can get redundantly stuck on one high note. When Tracy can “hear the bells” in her fantasy of marrying heartthrob Link Larkin, there wasn’t enough of a shift both technically and dramatically to put us into another world, and the same goes for the showing up of the glamorous, yet imaginary Supremes (although brilliantly sung by Mya Rose Puryear, Tanisha Moore, and Khalifa White). Softer lights, different tones, change in dynamic, perhaps?

Shout out to music director Helen Gregory and her nine-piece band, which sounds like a huge pit orchestra, and who easily glide along Marc Shaiman and Scott Wittman’s complicatedly, energetic score. David Wanstreet’s choreography is, in its own right, a star of the show.

Kathleen Geldard’s ’60s costumes are delicious eye candy, and Gerard Kelly’s piled-high wigs are in a league of their own. Michael Schweikardt’s candy colored set looks like Willie Wonka stepped in and chose the paint. Schweikardt’s above-stage level apartment for the Turnblads adds an extra place to direct focus.

You’ll begin the evening with a smile plastered on your face from the opening catchy, and feelgood “Good Morning Baltimore.” It won’t let up until long after the surprise spritz of who comes popping out of a giant can of Ultra Clutch, and the dancing up the aisles for the rousing closing number “You Can’t Stop The Beat.”

The Maltz Jupiter Theatre has a hit on their hands with Hairspray and there’s no stopping that beat.

Hairspray runs at the Maltz Jupiter Theatre, 1001 E. Indiantown Road, Jupiter, through Jan. 28. Show times are 7:30 p.m. Tuesday to Friday, with 2 p.m. matinees Wednesday, Friday and Sunday and an additional 8 p.m. performance Saturday. Tickets from $58. Show time is 2 hours and 30 minutes with a 20-minute intermission. Call (561) 575-2223 or visit jupitertheatre.org.