Good Luck Trying To Resist Wick’s Beauty And The Beast 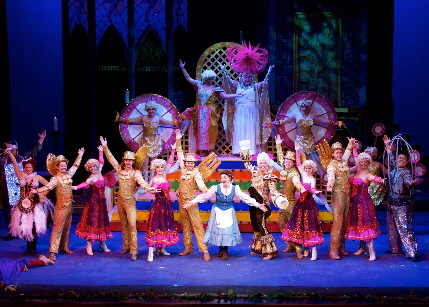 The final tear-inducing five minutes of Beauty and the Beast, if executed effectively as it is at The Wick Theatre production, is a good barometer of whether you’re dead inside.

There can be no spoilers left in this 23-year-old show, so when the Beast seemingly dies in the arms of Belle as she says she loves him, and he is transformed into the handsome prince and the cursed household staff is returned to human form – especially Chip – and everyone sings the title song, well, it’s pretty difficult not to feel your throat closing up.

Credit the commitment of producer Marilynn Wick: If a local theater is going to take on this road show warhorse that demands more resources than usual, this is the way to do it, especially since The Wick was burned at the box office two years ago with its first major summer experiment Peter Pan.

The playbill lists 31 actors (including six Boca and West Boca High School students). The Wick rented a gorgeous computerized two-story castle that swings around, borrowed from Gateway Playhouse in New York. It rebuilt and redesigned many of the costumes (not just pulled off Costume World’s rental racks). It hired an experienced director, musical director and creative team unafraid of the heart in the piece. And then it assembled a cast of clarion voices who commit to the fairy tale without the hint of a wink.

We’ve said this in earlier reviews: On stage Beauty and the Beast (sorry, Disney’s Beauty and the Beast) has to fight inherent flaws. It has a slow protracted first half-hour that can only be rescued by Belle’s charisma and Gaston’s antics. Some songs simply are not necessary and some (written by Tim Rice not Howard Ashman) have mediocre lyrics. Most crucially and disappointing, it’s impossible for any production number to equal the scope and imagination of the 1991 animated version. Even the rousing “Be Our Guest” only lands because Alan Mencken’s music is irresistible and it’s delivered by The Wick’s cast with an infectious enthusiasm.

But this production ultimately prevails over those challenges to deliver a crowd-pleasing satisfying evening thanks in large part to hundreds of comic bits and dramatic grace notes by director Dom Ruggiero, assured musical direction by Eric Alsford (plus lush tracks subbing for a band), and solid choreography by Angela Morando-Taylor.

They have produced a decidedly physical show, from the Beast’s animal-like body language to the baggy pants vaudeville moves between Gaston and Lefou who have more acrobatic interplay than some couples in a hotel room. At one point, Gaston does a weightlifter’s curl with Lefou’s body.

None of this would work, of course, without such a solid cast. As Belle, Mallory Newbrough’s warmth and loveliness extends to a classic creamy Disney voice that encompasses spunky strength and wistful yearning. It is nearly impossible to believe that a few months ago, she was the best thing in The Wick’s rock revue Beehive when she reincarnated Janis Joplin.

New Jersey actor Loren Christopher has played the Beast before, so he knows how to put across emotion from underneath a mask. In the medium-sized Wick house, you can see his blue eyes darting about nervously, widening in surprise, expressing fear and anger. His posture ranges from a feral crouch to regal erectness. His voice can growl the low notes, but scales the higher part of the range in his cry of the heart power ballad “If I Can’t Love Her.”

But the standout is Jacob Thompson’s written-to-be-a-scene-stealer performance as Gaston. While Thompson has played the Beast before, he seems born to play the delightfully vain self-centered boorish buffoon worthy of another six adjectives. Thompson has a muscular voice that effortlessly reaches notes in the basement, a rubbery face with eyebrows that knit in clueless concentration, and strangely handsome face with a cleft chin and self-satisfied grin. It’s no surprise that he has played the title character in Bye Bye Birdie. He is especially effective in his acrobatic byplay with Courter Simmons as Lefou who, appropriately, plays the sidekick like an over-the-top vaudeville clown.

The rest of the castle cabinet is equally solid led by the ever-dependable Angie Radosh as Mrs. Potts, with Jonathan Van Dyke as the hospitable Lumiere, Kevin Robert Kelly as the fussy Cogsworth, Krystal Bly as the florid Wardrobe, Troy Stanley as Belle’s hapless father, Tommy Paduano as the sinister asylum keeper, Alexa Lasanta in cross-gender casting as Chip, and Emily Tarallo as the ever-sexy Babette.

Veteran lighting designer and Ruggiero associate Jose Santiago brings dimension to that stunning set. The opening prologue animation, copious backgrounds that are often in motion and other elements are computer-generated projections, partly created for earlier Ruggiero productions. But they were redesigned and executed by local Josieu Jean, the former Navy man with little theater experience but whose second career in graphic design and computer animation has been enhancing the visual aspect of The Wick productions for two years.

You can quibble: the Beast unconvincingly “battles” computer generated wolves. Some sound and light cues weren’t quite nailed down opening night, but that will work itself out.

But the evening works as a whole because what outsider (and aren’t we all) doesn’t want to believe that people will see the real beauty inside?

A side note: Most theaters in South Florida producing mainstream warhorses and “new” classics usually hire experienced freelance directors like Ruggiero and Norb Jorber at the Wick, Mark Martino and Marcia Milgrom Dodge at the Maltz Jupiter Theatre, Kevin Black and others at Broward Stage Door. The confluence is that most of them have mounted these shows before, sometimes multiple times, sometimes many many times. This is a plus when a director has no more than three weeks rehearsal (if that) and perhaps a similar period in prep time while working other projects. They know what staging works and what doesn’t. They have a large time-tested carpetbag of tricks and bits of business to apply and they can give the thing a sense of polish as Ruggiero does here. The challenge, which most of these folks like Ruggiero succeed at, is to keep it from feeling stale and mechanical. The Maltz, which also hires lead actors who have done the parts before, achieves this by somewhat reimagining if not deconstructing a piece. But credit is due that most of the time these other directors keep the work fresh for the audience, even though it’s old hat to them.

Another observation: In a practice rare among South Florida theaters, the Wick had all of its leads and secondary character parts understudied in this show, all by ensemble members except for the Beast who was backstopped by Thompson with 300 performances of the role already under his tunic.