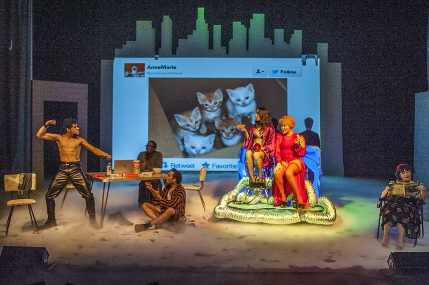 Short play fests are a mixed bag —a smorgasbord of bite-size, Mc-plays, usually no more than 10 minutes in length, sometimes a bit longer, but not much. It’s no easy feat to write a short play with its time constraints to establish characters, create a story, and tie it up with a solid ending. This is a challenge for even the most savvy of playwrights.

City Theatre’s 22nd anniversary production of Summer Shorts certainly fit the bill of its Call for Submissions, where a line in its Call states that the festival looks for “plays that span style and genre.” If there was one thing the eight plays chosen had in common, they all had something to say — riffs on love, office politics, star power, the age of the internet, and drugs in schools. Where they all differed, was that, probably more than any other year, they really did run the gamut of style and genre.

There were, as usually is the case in Shorts, comedies, and plenty of them. But this year, it seemed as if finally the 10-minute musical had come into its own. There were three included in the eight, and one of them was really, really, really, special. Why? Because it was (a) a Southeastern premiere (b) cherry picked to be directed by the newly named artistic director of the festival, Margaret M. Ledford, whose appointment was announced only a few weeks before this edition of Summer Shorts, and (c) wait for it — it was written by Lin-Manuel Miranda, the guy behind that blockbuster hit Hamilton.

So, without further ado, let’s run through this year’s Summer Shorts plays — the good, the funny, the ho-hum, and, oh, yes, of course, that 14-minute Miranda musical.

In order of appearance:

The Southeastern premiere of Choosing Love by Chisa Hutchinson, directed by Jessica Farr, featured Phillip Andrew Santiago as Jason, a guy whose hoping a psychic can give him the 4-1-1 on what he should do with his future. He’s willing to drop ten bucks to take a chance on what psychic Kadian (Thianna Berrick) has brewing in her crystal ball. As the show’s opener, the bar may have been set a bit too high. The premise is that a psychic encounters the man she knows is her destiny, and while this short had plenty of potential, the sparks didn’t fly, mostly because the chemistry was lacking between these two love interests.

Susan Westfall’s The Bestseller received applause even before one word was spoken. Why not? Her world premiere play would, any second, be unspooling on the Arsht Center’s Carnival Studio stage, which was named in her honor in 2014.  The Summer Shorts Festival’s cofounder and literary director’s entry, directed by Jessica Farr, featured a cast of the most A-list actors in Shorts, including Irene Adjan as Lily, a writer whose aspirations of being a bestselling author have dried up long ago. She runs a bookstore her husband left her when he died. Karen Stephens is Mia, her buddy and a bartender who is training a younger generation cocktail waitress, named Crystal (Lindsay Lavin). She’s already getting big tips from patrons, mostly because they are drawn to two dragon tattoos strategically placed above her breasts. Manny (Robert Strain) has just finished a book signing of another one of his bestsellers. He’s a sellout and doesn’t care that he pens novels where he kills off his leading ladies by giving them broken hearts. The next time Lily bumps into old pal Manny she’s going to tell him what a hack writer he is. And she does. There’s plenty for audiences to get involved in this slice of life. Westfall knows her stuff, which is no surprise. This is the mark of a good 10-minute play — you wouldn’t mind spending a bit more time with Lily, Manny and Mia — maybe another 10 minutes,  or even longer.

Missing Karma with book, music and lyrics by Timothy Huang, was written by Huang during a musical theater writer’s lab where the theme assigned was Rites of Passage. The first musical of the night, Karma concerns a young couple, Ted and Honey, who return to their favorite park to bury their dog named Karma. They discover that the only glue holding them together for their multi-year relationship was, in fact, the dog. Ledford’s direction makes the 15-minute musical/dramedy seamless. Huang’s intricate switch back and forth from Jonathan Larson-esque songs to dialogue, gives actors tricky business, but Brian Reiff as Ted and Lavin as Honey don’t miss a beat.

A group of office workers have grown tired of having their lunches stolen in Just Desserts by David McGregor, a dark comedy directed by David Nail with just the right amount of cynicism and cyanide. They are in search of the person they’ve dubbed Notorious Pig and are willing to go to great lengths to find the perpetrator. The office pool is Adjan as Joyce, Cassandra Zepeda as Becky, Phillip Andrew Santiago as Evan, and Lavin as Kris. Desserts is cleverly written and one of the strongest comedies of the evening.

Lin-Manuel Miranda’s 21 Chump Street about a high schooler in Boca Raton who will do anything to get a date with the new girl was written by the Hamilton wunderkind before his hip-hop history musical was a big hit. The idea for Chump is genius; Miranda took his plot from Atlanta-based reporter Robbie Brown’s story that was featured on public radio about Palm Beach County’s cops-in-school program. It gets a little preachy about drugs in school, but the tunes are catchy. There’s some nifty choreography, too. The cast features six of the eight-person Shorts ensemble.

Real Art, Louise Wigglesworth’s examination of how we view our worlds through art, is a nice ice breaker, and a good follow to the high wattage Chump. Directed by Ledford, it stars Lavin (channeling a bit of Natalie Portman here; she looks like her in this segment, and sounds like the movie star a bit, too), as Abigail Bolton, an artist whose just won a prestigious art competition, and lottery winner Loretta Faggle (Stephens), who wants to spend her new money on Bolton’s prize painting. Trouble is the artist isn’t selling. The sweet story casts light and shadows on unlikely friendships, and on how art can change perspective. Wigglesworth is a painter as well as a playwright, which adds a dimension of genuine, painterly know-how to the dialogue.

In the age of social media, Shorts would be remiss if they didn’t unearth an internet shorty. They found their gold in the stranger-than-fiction Adorable Kitten Image Collapse by Steve Yockey. Directed by Paul Tei (it couldn’t be a better fit for Tei’s Mad Cat imagination), Adjan plays the nerdy cat lady Ann Marie, who unearths slacker Rick (Reiff), who has been trolling her on the internet. If you don’t know what an internet troll is, here’s a short description. The troll is usually posting derogatory remarks, commenting on someone else’s posts. In this case, Rick can’t stand Ann Marie’s cute and cuddly kitty pictures, and says so on social media. When she shows up with a lawn chair and a large kitchen knife, the troll has to face his own demons. Large still shots projected upstage intermittently of cute kitten pictures from Ann Marie’s Twitter account are a riotous addition.

Wrapping up Shorts is the cheeky Baked Goods, another musical entry. Written by Charlie Cohen, Helen Park, and Christyn Budyzna during New York’s 2014 BMI Lehman Engel Musical Theatre Workshop, Goods has shades of Book of Mormon in its sensibility, mostly because of its off-the-grid concept. Adult actors play grade schoolers. Gertie, hilariously and authentically portrayed by Adjan gets a little help from boy scout Maxwell (a side-splitting interpretation by Reiff) in selling 100 boxes of cookies and pleasing her mother (Stephens), who happens to be the troop’s leader. Goods is a laugh a minute, and ten minutes of this tasty treat is definitely the icing on the Shorts‘ cake.

Jodi Dellaventura had the task of creating individual sets for eight different plays, and, Ellis Tillman was in the same boat with costume design. As usual, the best in the business here in South Florida had everything looking spectacular. Musical direction was by Caryl Fantel with choreography by Sandra Portal-Andreu. Sound design credit goes to Steve Shapiro with lighting design by Eric Nelson.