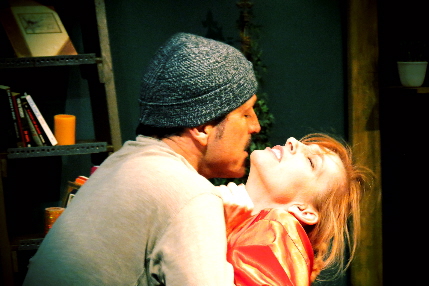 Dominick J. Daniel bends Erynn Daltonj to his will in the harrowing opening of Extremities at Infinite Abyss / Photo by Paul Feller

Both on the page and on the stage at Infinite Abyss’ courageous production, the well-named Extremities opens with one of the most harrowing 15 minutes in mainstream American theater and ends with a troubling thought-provoking finale.

But the challenge is the play in between, an examination of the extent human beings will go for justifiable revenge and the toll that the pursuit wreaks on our humanity.

William Mastrosimone’s 1982 script extensively depicting a sexual assault and its complex aftermath is insightful about behavior under emotional pressure, but also struggles with implausibilities that you must forgive to let the story progress.

So while director Jeffrey D. Holmes, Infinite Abyss founder Erynn Dalton as the victim-turned-captor and the rest of this cast commit completely to the work, sometimes the less scorching material in the middle seems a bit pallid and the troupe is clearly acting rather than being during those stretches.

Still, they overall produce an unsettling if uneven evening that will leave audience members mulling and debating on the car ride home.

The evening opens with Marjorie (Dalton) alone in a house, bug spray in hand, chasing down a wasp, which has stung her.

A tall scruffy man blithely strolls into the living room (Abyss veteran Dominick J. Daniel). While not a slobbering threatening figure, he immediately unsettles Marjorie and us by invading her space while spinning a bogus story about looking for a buddy who supposedly lives here. She asks him to leave, but instead he begins to inspect the furnishings in the room.

Sure enough, he insinuates himself deeper and deeper until he makes it clear that he is there to rape her repeatedly and over a lengthy period of time. He has done his homework by stalking her, stealing her mail and he knows that her two roommates are busy at work for the next few hours.

What follows is a protracted depiction of this bastard’s assault and Marjorie’s struggles as he handcuffs himself to her, slaps and punches her, covers her face with a pillow, forces her down on the coffee table, smothers her with kisses, fondles her body and insists that she say she wants him and even loves him. The key word here is protracted. Dalton, Daniel and Holmes spare nothing of themselves. There is no blackout and go to a commercial, no pulling punches. It is excruciating and some theatergoers familiar with piece don’t want to see the play more than once in their lives.

Before he can strip and penetrate her, Marjorie manages to douse his face with bug spray, incapacitating him. She binds him with his handcuffs, duct tapes his legs, blinds his eyes with her bathrobe belt and tries a noose around his neck. Then she forces him into the fireplace where she chains him in with an ornamental grate.

Her attacker, who she refers to “animal” rather wanting to humanize him with a name, begins a panoply of head games to get her to release him. He unleashes wave after wave of conflicting tall tales of woe. Even given that this man is a certifiable psychopath in addition to being a serial rapist, this is where Mastrosimone makes it tough for Daniel and Holmes. It’s ludicrous that anyone would think that any of the tales would be effectively credible with his victim, but certainly not when he changes them every minute or two.

Still shell-shocked, Marjorie fights back against his incessant cruel taunts by throwing household chemicals at him, telling him that its gasoline and then threatens to set him on fire. It is the beginning of her own downward spiral into torture and worse.

Marjorie makes her decision. She will dig a hole in the back garden and bury him alive.

But then her two roommates arrive, Terry, a high-strung religious secretary (Francisca Munoz), and Patricia, a social worker who tries to reason out the dilemma (Colleen Pinto). They are roommates, not friends, and the baggage aming them is exploited by the animal in a psychological life-and-death chess match of manipulation. Everyone turns on everyone as the social structure disintegrates.

The strength of the middle section is watching how Marjorie becomes more and more like the animal, and how her roommates begin to doubt her story and believe the malleable accounts by the sobbing, hapless animal. But these performances lose a good deal steam until the endgame in which (spoiler alert) Marjorie regains her humanity and prevails, but only after becoming a mirror image of the monster.

Dalton has the toughest assignment, not because of the rape scene, in which the actress excels at exuding the terror and degradation. The tough part of the role is dealing with the aftermath when Marjorie is emotionally cauterized and yet becomes frighteningly steelier in her determination to wreak revenge. Dalton walks the line well; she’s terrific staring at the animal caged in the fireplace like he is a virulent toxic virus that could erupt from the test tube if she lowers her guard. But Dalton struggles with making Marjorie a vibrant compelling focus of the evening when she must also depict her as a numbed victim.

Daniel has to deliver a great deal of whining and crying, which eventually wears thin, but he is quite deft at depicting Raul’s schizoid passive-aggressive needy-dominating personalities during his attack on Marjorie. He is completely credible when, astride Marjorie and nuzzling her neck, he says, “Don’t wreck this for me” and “See what you’ve made me do?”

Pinto and Munoz are barely adequate and never convincing in their roles.

Holmes, a longtime Abyss associate who has been out of town for a while, proved himself a skilled director of difficult material with his production of The Pillowman in the summer of 2011. He is in sync with this material as well, especially for staging. But he cannot seem to create the crucial energy and tension with the cast members he has.

Praise is due “Team Badger,” whoever or whatever that is, for the fight choreography which is all too realistic – a major accomplishment in a tiny venue like the Abyss. This play is famous for inflicting bruises and other injuries to cast members; hopefully there is as Urgent Care center nearby.

The show is performed at the company’s new space in a storefront just southeast of Five Points in Wilton Manors. Thanks to its tenant Island City Stage, the premises have been significantly upgraded since Abyss’ last drama there, Bug.

Over the years, Infinite Abyss has fearlessly specialized in the edgiest and thought-provoking theater that Dalton and company can find. Some of it works well, some of it not. But their aesthetic tends toward visceral, physical, psychological and almost feral plays that few local companies have the guts to tackle. In between, it mounts tongue-in-cheek Goth and horror evenings. But undeniably, its work gets stronger with every production; Extremities fits that arc.

Audience behavior note: This is theater. It’s hard enough to maintain the suspension of disbelief as it is. So why do people feel in a straight play that they have to applaud between scenes? It destroys any hope of maintaining an illusion of life. You don’t applaud the bear in the middle of The Revenant or the spectacular 17th pileup in Mad Max Fury Road. I’d rather sit in silence during a brief blackout and process what I just saw. In musicals, this is a common faux pas and perhaps forgivable, although people also feel compelled to turn to the neighbor and loudly affirm, “Wow, she’s a good singer” as if we needed their instant assessment. But in a drama, just hold your applause to the curtain call.