Maltz’s Kiss Me, Kate Is Witty And Romantic Throwback

Brandon Contreras leads the kids in “It’s Too Darn Hot” in the Maltz Jupiter Theatre’s Kiss Me, Kate / Photos by Jen Vasbinder

The Act Two opening of Kiss Me, Kate has no reason to be in the show from a narrative standpoint. “Too Darn Hot” is a bunch of performers in the alley behind their theater breaking into dazzling dance and sultry song about the meteorological conditions. It has no other excuse for existence than to give the second half of the show a blazing kick off. It’s a throwback to the musical theater when a production number was its own justification.

But that’s precisely the point. The scorching jump off of steamy dancing across the Maltz Jupiter Theatre stage is a wry valentine to the kind of musical comedy that once ruled pop culture.

In fact, the Maltz’s 2016 production of a 1948 classic is a skilled homage to that Golden Age post-war period of theater when everyone knew which war you were talking about. A mixture of classic musical theater tropes leavened with a sophisticated satirical tone, this musical-within-a-musical-within-a-musical often lets its then-hip veneer slip to expose a lushly romantic soul.

The cast led by director Peter Flynn, musical director Helen Gregory and choreographer Marcos Santana invests mostly gorgeous voices and a decidedly comic sensibility into this backstage/onstage tale of veteran thespians trying out a musicalized version of The Taming of the Shrew. The onstage machinations of the Bard echo the backstage tempests of egos, tantrums, suspected infidelities, lusty flirting and true loves.

If Gypsy and Guys & Dolls are considered the acme of American musical theater classics, then Kiss Me, Kate isn’t too far behind. It and we are blessed with Cole Porter’s last great score (although far from his last work). It is awash in his wittiest lyrics and some of the most uninhibitedly romantic music written for the stage. The raft of standards range from the sublime ballad “So In Love” to the vaudeville turn “Brush Up You’re Shakespeare,” which features the great couplet “If she says your behavior is heinous / Kick her right in the Coriolanus.” Audiences would have to wait for Stephen Sondheim before they heard such lyrics again.

The book by Sam and Bella Spewack is not only well-constructed for its time, but wickedly funny and delightfully bawdy as it gleefully skewers the high strung neurotics who populate theater. When a nightclub chorine turned featured actress asks what the spotlight is called that shines on the leading lady, she’s told “a star bump” and the dancer says, “I wish I had one of those.” To which the diva in the light quips, “I believe a star bump is what got her the part.”

The story of Kiss Me Kate focuses on a production of Kiss Me Kate, a grafting of musical comedy on the Shakespearean tale. Its tempestuous star Lili Vanessi (Sally Wilfert) is a diva whose recent run at Hollywood fizzled and who has returned reluctantly to the stage. The male star, producer and director is the fading matinee idol – and Lili’s ex-husband – Fred Graham (Peter Reardon), a virile rake who has bet his last dime on this show trying out in Baltimore.

Still at marital war, they are only working together because they need other professionally. Fred tells Lili, “You have the worst temper in show business. You bit King Kong and he got rabies.” But we know what they will never admit to each other and only acknowledge to themselves in private: They still love each other with an indestructible ardor.

All four are struggling to get the show on in previews even as Lili contemplates marriage to a famous general, and two hoodlums (Danny Rutigliano and John Treacy Egan) try to collect a $10,000 gambling debt that Calhoun signed Graham’s name to.

It’s a warm hoot from the moment the stage manager turns off the ghost light on an empty stage, the onstage/backstage troupe wanders in individually and they all join in the unifying anthem “Another Op’nin’, Another Show” led by wardrobe mistress Hattie (Allyson Kaye Daniel).

Flynn and company ride this joyous groove like a veteran jockey in the Belmont Stakes. If the current generation wonders what a well-executed version of this genre looked like 70 years ago, this is a pretty good indication.

Wilfert not only has a beautiful soprano trill but an unrestrained bent toward comedy that embraces the faux operetta of “Wundebar” as well as the acerbic “I Hate Men,” which features the lyric “Of all the types I’ve ever met within our democracy / I hate most the athlete with his manner bold and brassy / He may have hair upon his chest but, sister, so has Lassie.” Somehow she makes Lili a likable character despite her furious explosions, perhaps because Wilfert makes it clear that Lili still loves theater and Fred.

Like her, Reardon doesn’t mind playing up his character’s shortcomings as a preening ham with a fragile ego and a devilish grin. Reardon has a fine voice, no finer than when he sings the rue-drenched reprise of “So In Love.” People familiar with other productions and cast recordings might miss the deeper register that Alfred Drake, Howard Keel and Brian Stokes Mitchell brought to the role, but Reardon’s martini mellow voice amped up with gusto is intoxicating on such numbers as “Were Thine That Special Face.”

Raimone and Benoit don’t have a lot of chemistry, but individually they are memorable. Benoit is a fine dancer, but she also brings a strong stage voice to zany comic numbers such as “Always True To You In My Fashion.” Raimone’s singing is passable if not outstanding, but his smooth liquid movement as the show’s principal dancer makes up for it. 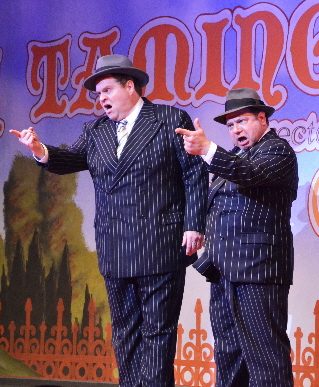 Every Kate is judged, in part, on the quality of the two Goodfellas who get pulled into the show as they protect their investment. Egan and Rutigliano are a dead-perfect Mutt and Jeff who nail characters who are half Shakespearean clowns and half Abbott and Costello. Their woebegone faces as they “Brush Up Your Shakespeare” and their decidedly ribald body language are a highlight of the evening.

One more shout-out goes to Brandon Contreras. For most of the show, he plays Fred’s backstage dresser. But that hesitancy disappears when he sings the white-heat “Too Darn Hot” and leads the troupe in that sizzling-as-a-frying-pan dance routine designed by Santana.

If there is a weakness, it’s in the actual scenes from Shakespeare. Other than Peter Galman as Baptista, few of these actors do very well with the Bard’s verbiage.

Flynn and Santana give the show an assured polished feel with musicalized rehearsal tableaus credibly providing cover for the scene changes. But they infuse it with scores of bits of business that reinforce the comedy such as Fred commandeering Lili’s makeup while she is occupied on the phone. Some of it is subtle such as when one of the hoods gives a little leg movement to underscore a ribald couplet in “Brush Up Your Shakespeare.”

Gregory, who leads a brassy nine-piece band, has coaxed and shaped those vocal performances beautifully. One strange element: Either she or the arrangements or the actors have a showoff predilection for pausing, bending the second to last note in a song in a way Porter never intended, and then blowing it out like an athlete slamming a ball into the stands.

The atmosphere is enriched by Jennifer Caprio’s satirical costume design that encompass the hoods’ double-breasted pinstripe suits, Lili’s stylish street wear, the dancer’s working clothes and the Shakespearean outfits replete with thigh-high boots and motley-colored tights with bulging codpieces. The only non-period note is Raimone who sports a rapper’s shaved head and close cropped beard more likely found at the 21st Century Grammy Awards than the 1948 Tony Awards.

Blessed with a solid production of some of Porter’s loveliest and funniest work, the Maltz’s Kiss Me, Kate is worth the drive.