Heirs Behaving Badly: Dividing The Estate May Be Familiar 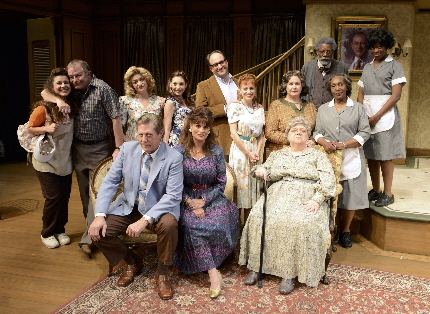 Black comedy usually refers to finding something funny in dark subject matters not readily apparent as a source of humor.  But other times that laughter is as much nervously whistling in the dark about deeply discomfiting issues.

Plenty of laughter greets every witticism and absurdity in Palm Beach Dramaworks’ production of Dividing The Estate, Horton Foote’s acidic depiction of greed, jealousy and family. But through the laughter, you either silently thank God you don’t know these people or you curse fate that they are way too familiar.

For while the greedhead Gordon family is a study in avarice and entitlement in extremis, all the maneuverings and manipulations may cut too close to home and, at the very least, force you to examine your own conduct.

Dramaworks’ Producing Artistic Director William Hayes, who has heard tales of  only slightly less grasping kin, has led an expert 13-member cast in a biting if a bit languorous examination of humanity’s darker side.

The late Mr. Foote, an American creative treasure best known for The Trip To Bountiful and Tender Mercies, is virtually never performed in South Florida’s professional theaters. Like other playwrights chosen for Dramaworks’ mission of theater that makes you think, Foote’s dramaturgical metabolism is noticeably slower, looser and more expansive that most of his contemporaries. He loves his characters to tell stories and in this play, he indulges himself with some quite debatably editable stretches in which folks sit around and trade local gossip for long periods that slow the narrative drive of the show.

But Foote creates a framework in which the Gordons inexorably drag themselves into a moral abyss, leading to a penultimate scene that closely resembles the finale and catchphrase of Sartre’s No Exit: Hell is other people.

The play is set in Foote’s fictional rural Texas town of Harrison in 1987, just after Black Monday wiped out the stock market and exacerbating the worst recession at that time since the Great Depression. Storefronts are boarded up; the only restaurants left are McDonalds, Sonic and What-A-Burger; the new plastic factory is owned by a Taiwanese concern.

The Gordons, still reigning over Harrison from their mansion, are struggling like everyone else – now they are down to only three servants. With the cost of raising cotton making farming unprofitable, they are land rich and cash poor. The one seemingly promising source of funds is “the estate” founded under murky beginnings by a great-great-grandfather and having sustained five generations of Gordons. But with matriarch Stella in her 80s and her three children in challenging economic straits, the extended families are hungrily circling the cash cow with their cutlery drawn. Some are pressing Stella to liquidate the estate, something she vows never to do.

Long jettisoned by that generation are the verities of land cited in Gone With the Wind: “Do you mean to tell me, Katie Scarlett O’Hara, that Tara, that land doesn’t mean anything to you? Why, land is the only thing in the world worth workin’ for, worth fightin’ for, worth dyin’ for, because it’s the only thing that lasts.”

It becomes increasingly clear that some of the relatives are more desperate than others. But even the most laid-back members have an absolute unconscious expectation of entitlement that decades of having money has inculcated in them. These are inordinately proud people who have been trying to avert their eyes as they acclimate themselves to such indignities as living on allowances from the estate and borrowing huge six-figure sums.

When Stella continues to balk at selling the farms and manse, resentments and jealousies boil over in torrents of snide sniping that wash away the veneer of Southern gentility and perfunctory familial fealty. And then its gets really ugly.

All the while, Foote has suffused the proceedings with generous helpings of humor – this is a Moliere-like comedy, after all. People slice each other up with quips or simply, like in a “reality” TV show, blithely act in self-centered ways that comically sweep away the niceties of human interaction.

This is a huge cast for Dramaworks and every last person is in fine form. But Kim Cozort gets the best role as the most nakedly rapacious daughter who never stops scheming to get her hands on the money and doesn’t care enough to hide it. With greed pouring unabated out of wide eyes, Cozort courageously gives herself over to this monster who is forever asking, “How much do I get?”

Stella is a crusty Mother Burnside character from Auntie Mame in the hands of Mary Stout, who feigns forgetfulness but knows she is controlling everyone’s lives in 20th Century slavery by her ever-changing promises of what will be in the will.

Besides Cozort’s Mary Jo, Stella’s other children include the alcoholic wastrel Lewis (Rob Donohoe). The other daughter, Lucille (the wonderful Elizabeth Dimon) only seems less interested because the current set up provides a home for her and her son – nicknamed Son — (Gregg Weiner) who tries to keep the family finances’ afloat.

Only slightly less worried than Mary Jo is her weary husband, the down and out real estate salesman Bob, played by Cozort’s husband Kenneth Kay. But the most operatically upset by the limitations of their plights are Mary Jo’s two spoiled rotten daughters (Gretchen Porro and Leah Sessa). Son is a widower who is courting a sweet schoolteacher (Margery Lowe), a positive-thinking naif trying to preserve her optimism while navigating this shark tank. Natalia Coego makes a brief but memorable appearance in the final scene as Lewis’ girlfriend.

What is striking is that all of them have willing tied themselves, their present and their future to the estate. Most have no shame in announcing they have never worked a day in their lives

Essential to the household’s operation are the remaining servants played by Avery Sommers, Deltoiya Monique and in a bravura turn, John Archie as the 92-year-old retainer so addled he doesn’t realize he has been forcibly retired.  Archie has been playing a variation of this voluble, lovable coot role for years now, from Radio Golf to Driving Miss Daisy. But Archie is a superb actor and while he chews the scenery with gusto, he may be the most vibrant and entertaining character on the stage.

The creative team has worked their magic again from Brian O’Keefe’s period costumes to Jeff Modereger’s design of the once-elegant living room which has resisted showing signs of age and wear. Graced with armchairs and a settee facing out at the audience, it gives the sense of a family sitting on the front porch – if you happened to live in a mansion  — but it also enforces a lot of static staging.

Foote helped the audience distance themselves from these creatures by creating a quirky clan of molasses-mouthed eccentrics who are so acrimonious and so toxic that we can deny knowing them. But the resonance is disquietly deafening.