Posted on November 6, 2019 by Bill Hirschman 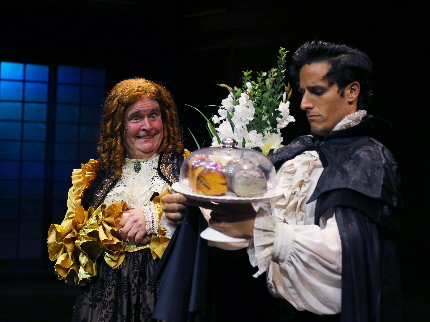 Paul Carlin and Jared Zirilli cavort in the world premiere deconstruction Dracula: A Comedy of Terrors / Photos by Zak Bennett

In the prologue of Maltz Jupiter Theatre’s production of Dracula: A Comedy of Terrors, the actors literally throw out the book—Bram Stoker’s deadly-serious source material, that is. Chucking their musty copies behind them with the satisfaction of college graduates tossing their caps, they are thus freed from the rigors of fealty. And besides, they add, they want to get us all out of here within 90 minutes—an admirable goal for many new plays and, in this case, a small mercy.

It’s not that this world premiere parody by Gordon Greenberg and Steve Rosen is a tortured experience, by any means. The dexterous and accommodating actors never miss a beat, and the Maltz’s production wizards create a sensory experience that shines and crackles with gothic ambience and spooky action. But even for such a well-oiled treatment, the script still creaks.

Greenberg, who also directed the production, too often lands his humor in a hoary comfort zone of rim-shot-ready quips fit for vaudeville and the Catskills. There are riffs on Elvis and I Love Lucy for the boomers, bits about rideshare drivers and Amazon Alexa for millennials, and a goodly number of demographically transcendent clichés referencing the grime of New York City, DMV workers and lying politicians—saws as old as the Count himself. Laughter springs from surprise, but this Dracula spoof too often feels recycled. The show promises convulsions but receives mostly titters.

For all the talk of disobedience to the Stoker novel, Greenberg’s plot stays pretty consistent with the time period, machinations and characters of the original story. Peter Simon Hilton, continuing in a comic mold after his scene-stealing turn in Maltz’s Mamma Mia! earlier this year, is Steven a fusty, germophobic, naïve Jonathan Harker, whose nocturnal visit to Dracula’s Transylvanian castle incites the action. There, he meets a youthful and stylish count played by Jared Zirilli, whose tight black leather pants, frilly and/or puffy shirts and somehow understated cape—one of many imaginative outfits from costume designer Tristan Raines—suggest what it would look like if a twenty-something Ben Stiller had joined Bauhaus.

Thrilled to sell his new favorite client a haunted fixer-upper in London, Harker invites Dracula to his engagement party back home, where the suave count lusts after his realtor’s fiancée, Lucy (Mallory Newbrough). Hunger being what it is, he settles for the blood of her homelier sister Mina (Paul Carlin, the Torvald of the Maltz’s A Doll’s House, Part 2, playing marvelously against gender for this show’s entirety). One bite leads to another, with our protagonists eventually enlisting the help of vampire hunter Van Helsing (Carlin, again in drag) to patrol the city, stake in hand.

Favoring a similar sort of madcap, self-reflexive cheek as Patrick Barlow’s regional-theatre favorite The 39 Steps, A Comedy of Terrors makes resourceful use of minimal properties—the actors ride mops for horses, and create sea mist from perfume spritzers—on a stately and capacious Caite Hevner set that stands in for numerous 1890s manors and their surroundings. The Maltz hired two illusion designers for a couple of nifty magic tricks that undergird the comedic tone of the proceedings with genuine creeps.

But it’s the rapid costume changes that tell us the real magic takes place in the wings. Save for the title character, all of the actors are double or triple-cast: In contrast to the fetching Lisa, Newbrough plays a crusty carriage driver and a Cockney, kleptomaniac mental patient with equal aplomb. Wayne LeGette is both Lucy’s arrogant, misogynistic Dr. Westfeldt and the stooped-over, insect-eating Renfield, skillfully juggling both parts sometimes within the same scene.

The hard work on behalf of everyone is demonstrable, and Greenberg achieves his brevity of vision: The show clocks in at 80 minutes, including a brief curtain speech. Of the, I would guess, 250-plus jokes crammed into this time, I can count the moments I actually chuckled on one hand, which speaks, perhaps, to the challenge of the undertaking itself. Dracula has already been to camp too many times. The Count in Michael McKeever’s woke reboot for Zoetic last year arrived onstage embalmed in kitsch, and the show spent its duration looking for a consistent tone. Even Mel Brooks couldn’t make a funny parody, and he had the gift of Leslie Nielsen.

Perhaps it’s time to put away the garlic and give the old man a rest.