Riverside Brings Back The Era With Beehive The 60s Musical

Posted on November 7, 2019 by Bill Hirschman 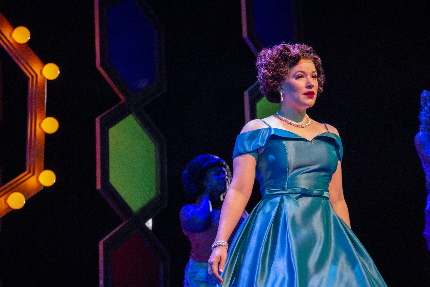 Riverside Theatre hits the mark for a designated demographic with its season opener, Beehive – The 60s Musical.

The show, created by Larry Gallagher, is a musical revue of songs from the 1960s made popular by girl groups such as The Supremes and The Shirelles and iconic female voices like Tina Turner, Aretha Franklin and Janis Joplin.

While the title of the show is a misnomer (it is not a musical, but really a musical revue, meaning only songs and no real story or character development like you’d find the book of a proper musical) Beehive does tug at your desire to reminisce.

So, yes, with audiences getting in on the act, you might feel like you’re stuck in a car with very happy people all around you singing “The Name Game.” If you can relax about that, or even join in, you’ll have fun.

Even before the first note is sung, the audience gets into the act with that early ‘60s heartbeat – the two-one clapping that starts the song “My Boyfriend’s Back,” sung by Kathryn Brunner, who was Elle in last season’s Legally Blonde at Riverside.

A couple of times the six talented singers also venture into the audience for a little participation.

And the costumes! Oh my. Kurt Alger goes over the top with a wonderful array of pedal pushers, chiffon, go-go boots, mini-skirts and more. The wigs are also spot-on.

While the first act leaves you wanting more when Tavia Rivee delivers an impeccable Diana Ross in “Where Did Our Love Go” and “Come See About Me,” the second act pops that bubble gum and dives into some terrific tributes to iconic rock voices of the late 1960s, met with thunderous applause.

It starts with the tear-jerking “Abraham, Martin and John,” the 1968 song which laments the assassinations of national leaders who seek to do good.  Sung originally by Dion, it asked the question “Anybody here, seen my old friend…?” Less would be more with this important moment in the show. Indeed, anytime someone who went through the ‘60s hears the song, they get that it signals the decade’s watershed moment and its resounding change onto American society. There is no need for schmaltzy projections of Abraham Lincoln, Martin Luther King, Jr. and John F. Kennedy looming over the singers.

Quickly following are songs highlighting the changes for women, which were many and which were all substantial, such as: “The Pill,’ approved in 1960 for birth control, had taken hold and freed up women’s lives; “Women’s Lib” was stirring into the American lexicon; and in 1965, Helen Gurly Brown took over editorship of Cosmopolitan, turning the previously male-led magazine into one extoling female sexuality and political empowerment.

So, yes, also changing with society was the collective female musical voice, which was filled with individuality.

Karissa Harris steals the show with her great, big, full-bodied tribute to Tina Turner. She’s got the voice, the powerful attitude and the physicality of the great singer. You’ll go crazy for her sexy “River Deep” and “Proud Mary.”

After the energy Harris unleashes as Tina Turner, Aveena Sawyer comes on stage with a more sedate and beautifully sung Aretha Franklin songs, “Chain of Fools,” “Never Loved a Man” and “Natural Woman.”

Finally, it is Baily Purvis who brings out the gusto as Janis Joplin. Although her portrayal shows Janis as surprisingly sober and energetic instead of the singer’s more vulnerable, frayed, boozy singing style, she also brings down the house in her big numbers, “Somebody to Love,” “Cry Baby” and “Me and Bobby McGee.”

Other standout performances include Caitlin Caughell who takes on the role of Connie Francis in an excellent “Where the Boys Are.” She is stunning in a divine early ‘60s inspired off the shoulder blue/green satin dress.

The six on-stage musicians, led by music director and keyboardist Ann Shuttlesworth, form a solid backdrop to the singers. Manny Moreira on lead guitar is terrific. You get the feeling, though, that he wants to let loose even more.

Director/choreographer Richard Stafford keeps the fun quotient high in Beehive – The 60s Musical, while at the same time honoring the important changes for women during the 1960s. It’s a cute show with some very good standout moments in the second act, giving you plenty of reason to sing along or at least tap that foot.

This entry was posted in Performances, Reviews and tagged Beehive - The 60s Musical, Riverside Theatre. Bookmark the permalink.