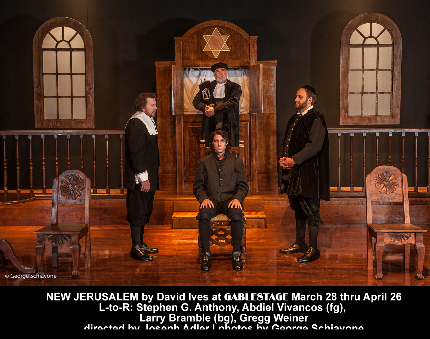 Paul: It must be nice to always believe you know better. To think you’re always the smartest person in the room.
Jane: No, it’s awful. Oh my, it’s awful.
—James Brooks’ Broadcast News

Baruch de Spinoza was the smartest person in the room, possibly in Western Civilization, then and now. And like another gentle Jew, he sacrificed everything because he was congenitally compelled to proselytize his vision of God’s truth.

The central tenets of the 17th Century philosopher’s rationalist ethos are explored exhaustively and exhaustingly in GableStage’s intriguing production of David Ives’ New Jerusalem which surely counts as the textbook definition of “thought-provoking theater.”

This precis might not sound like catnip to theatergoers, but Ives, director Joseph Adler and the cast create a dramatic evening that is sometimes mesmerizing, occasionally sluggish and usually an overwhelming cyclonic swirl of ideas slamming against each other in a trial to determine whether Spinoza will be excommunicated.

Even clothed in period garb and invoking slightly stilted speech patterns, the whole thing echoes those 2 a.m. dorm room debates freshman year that you had over The Great Issues – by turns brilliant, foolish, mind-numbing, consciousness-expanding.

The quick setup: In 1656, Spinoza was a Portuguese Jew (Abdiel Vivancos) living in Amsterdam, one of the most tolerant anti-Semitic countries of the time. A genius who studied for the rabbinate, his outspoken musings about the nature of God have upset both his fellow Jews rigid in ancient orthodoxy, as well as the Christian political elite.

He was summoned to an “interrogation” at his temple and emerged excommunicated. That much is known. Ives, after considerable study, has imagined what occurred during that meeting.

Spinoza is a genial young man with that light in his eyes found in a searcher exhilarated by the search itself, let alone coming ever closer to discovering the ultimate truth – much as genuinely motivated Christian evangelists do.

He is on the cusp of finalizing bedrock tenets of his philosophy: the questionable validity of organized religion, the fallibility of the Bible, and above all the nature of God as indivisible from Nature. He is a proud Jew, within his own definition, but is also an apologetic iconoclast.

Ives postulates that Spinoza is cross-examined by Christian prosecutor Abraham Van Valkenburgh (Stephen G. Anthony), synagogue elder Gaspar Rodriguez Ben Israel (Gregg Weiner), and his own revered mentor, the brilliant Rabbi Saul Levi Mortera (Larry Bramble). The audience stands in for the Jewish citizenry of Amsterdam and, in a theatrical sense, his judges.

The trial starts pokily; Spinoza easily runs rings around van Valkenburgh. He is so smugly certain that he maintains an infuriatingly placid and bemused demeanor, even when betrayed by his friend, the painter Simon (Javier del Riego). But the energy amps up when he is publically condemned by his half-sister Rebekah (Natalia Coego) and he is challenged by Rabbi Montera.

Like a dense Tom Stoppard play, you cannot possibly process everything racing by, but you can pull out from it, at any point, a section to ponder. Often, very often, concepts and counter-concepts fly by so quickly that you can only see an argumentative blur and you have to have faith that what the actors are saying makes sense. But even if you can’t follow it all – and no one could on a single viewing – there’s pleasure in appreciating the larger pattern that Ives has drawn: a celebration of the Divine gift of the reasoning human mind.

Don’t misunderstand. Many intelligent people are not going to welcome a dorm room debate as their idea of theater, even if Ives has constructed the play with a dramatic arc, complete with reversals, discoveries and characters growing before your eyes and ears. While this is not a particularly long play, it’s asking a lot of an audience to love something that they cannot completely follow.

Worse, Ives’ script and this production do not start off at all promisingly. Pre-trial exposition is offloaded on the audience as if dump trucks with grinding gearboxes had been backed into the theater. Everyone speaks in a cadence that sounds a tad like Elizabethan stage speech, which may or may not be valid.

Further, Ives includes long stretches of debate that feel self-indulgent. In journalism, editors advise their reporters not to empty everything in your notebook into your story that you discovered in your research.

What keeps the show afloat are the performances. Vivancos, a former Miamian who appeared in GableStage’s Masked, creates a fascinatingly flawed protagonist. His Spinoza exudes a likable charisma and a blithe self-destructiveness pursuing what he knows his community will consider heresy. Holy energy and passion virtually shine from Vivancos. He has a little trouble with Ives’ lines in which Spinoza says, “I know a few things about God that no one else knows” or I’m not like other people,” but any actor would have difficulty there.

The effectiveness of the others varies, but shout outs are due to Anthony’s pragmatic prosecutor who balks when being accused of being prejudiced, and Coego’s lightning bolt as the outraged sister who convincingly begins to see glimmers of her brother’s thinking.

But the strongest work of the evening comes from Bramble who has made a modest reputation playing classic Jewish seniors at Broward Stage Door. Finally given a meaty role as well as a fine director, Bramble delivers a powerful presence as Spinoza’s only intellectual equal. A stern rectitude emanates from Bramble’s rabbi but we later see his deep affection for his prize pupil. The final scenes in which Mortera must knowingly abrogate his intellectual integrity for the good of the community is an enviable piece of acting.

Side Note: The production was partially underwritten by the Richard Dawkins Foundation for Reason and Science, headed by the titular philosopher, writer and biologist who appeared with Ives last November at GableStage’s Distinguished Speaker Series.