‘It Shoulda Been You’ Spotlights A Major Talent At Playhouse 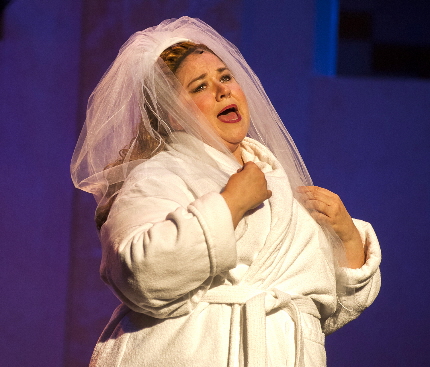 The temptation is to announce that ‘a star is born’ in Actors’ Playhouse’s production of the musical It Shoulda Been You.

But that would be mildly insulting to the fact that Cindy Pearce has been working on local stages about 14 years, most memorably as Penelope Pennywise in Slow Burn Theatre’s Urinetown.

So, Ms. Pearce, please forgive the breathless tone of we benighted theater souls when we trumpet the “discovery” of your blazing talent that has been there all along.

Because she doesn’t just blow the roof off the building with the power of her voice in the second act solo “Jenny’s Blues,” she does it by deftly mining every ounce of passion in the number, standing in for any audience member who has ever felt overlooked. And that’s just the high point; she’s that good throughout the evening as the hub of a comedy about two extended families colliding at a wedding in melt-down mode.

This edition of a cultishly popular but not successful show in NYC from 2015 is an unapologetically warm and witty old-fashioned Broadway musical comedy with a heart that falls perfectly in the wheelhouse of Actors’ Playhouse Artistic Director David Arisco, musical director David Nagy and a troupe of gifted company regulars like the invaluable Margot Moreland.

The plot follows the preparations and aftermath of a tumultuous wedding of a Jewish working class woman and a Catholic Brahmin invoking every trope in the book from the flamboyant wedding planner to the ex-boyfriend trying to stop the ceremony.

But almost everything has a slight twist: The title song comes from the bride’s parents totally invested in a successful event — but bluntly telling the boyfriend “It Shoulda Been You” getting married today.

The music by Barbara Anselmi and the book/lyrics by Brian Hargrove are comfortingly mainstream, yet lightly packed with all-too-true observations about flawed familial relationships. The plot also takes a sharp left turn about an hour in, but the developments only reaffirm the worth of true love and understanding. Other than that 21st Century curve ball, you can see many of the plot developments coming several blocks away (but not all), which is not a bad thing in a show meant to validate mainstream values.

Here’s the thing: Pearce is not the beautiful bride. She’s the beautiful bride’s older sister, Jenny, whose mother has never appreciated her as the family’s fixer, major domo and peacemaker. Even more crucial here, Jenny has been decidedly marginalized by her mother and society in general because she is inescapably plus-sized.

Pearce exudes an irresistibly winning persona suffused with wit and compassion. Although Jenny is self-deprecating and selfless, Pearce and the writers never allow her a shred of self-pity, just a pragmatic acceptance of the loneliness that lesser minds would stereotype her for.

She’s an actress, but Pearce has developed a pure voice that ranges from brass to tenderness and everything in between. Her impressive lung power will make many people overlook that her real talents are coaxing the emotion out of a song and her technical control of that voice.

So, back to the array of recognizable character types played with classic comic timing and exposing the authentic emotions underlying the yuks.

Her parents are the classic hard-charging kvetching mother Jody (a dead perfect Moreland who gets the chance to nail song after song like a Jewish Mama Rose) and her gentler husband Murray (a warmly supportive Oscar Cheda who puts just the right spin on lines like “Your mother and I had words…. But I didn’t get to use any of mine.”) Jenny loves her mother, but is made to feel a disappointment and relegated to second-priority. Still, she has the spunk to sass back to Mom with rejoinders like, “Are you all right? It worries me when you stop talking.”

The fact is the Steinbergs would prefer Rebecca be marrying in the faith to Marty Kaufman, (Tim Dolan), a slightly dorky scarecrow of a family friend who sort of is an ex-boyfriend. Marty, indeed, has crashed the proceedings to talk Rebecca out of this elaborate and expensive wedding.

At the other end of the building are Brian’s blue chip parents, the blithely disconnected father (Mark A. Harmon) and the ladies-who-lunch alcoholic matron (Marcia McClain). Providing company if not support are the intendeds’ very close friends, matron of honor Annie (Gabrielle Graham) and best man Greg (Alexander Zenoz). Doubling as seen-it-all banquet hall workers and inebriated relatives are Jeni Hacker (who also choreographed) and Michael H. Small.

And presiding over it all as a self-described nuptial Houdini is Connor Walton as Albert, the impossibly prescient and efficient wedding planner with panache.

It all sounds like a television sit-com, right? Indeed, that’s what it is. But it’s a really well-executed sit-com from the writing to the performances to Arisco’s bent for staging this kind of material. Plus, it has enough genuine heart that some of you may be fighting back tears at the finale, which ties up the knots in ways you didn’t quite expect when the show began.

Nagy has mostly strong voices to work with and he molds them skillfully. He also heads up a six-piece pit band that gifts the audience with a full rich melodic score that is well-served by Shaun Mitchell’s sound.

Tim Bennett designed a large two-tiered lobby of an upscale banquet facility with pink marble and frosted windows with the initials “SG” (could that stand for Signature Grand?)

This work may not qualify as Sondheim, but even with a lesser talent than Pearce, Actors’ Playhouse’s It Shoulda Been You would be a surprisingly satisfying summer smile.

It Shoulda Been You plays through June 11 at the Actors’ Playhouse at the Miracle Theatre, 280 Miracle Mile, Coral Gables. Performances 8 p.m. Wednesday-Saturday, 3 p.m. Sunday, and 2 p.m. Wednesday only May 24. Running time 1 hour 45 minutes with no intermission. Tickets $57-$64.  The theatre offers 10 percent off all weekday performances for seniors and $15 student rush tickets to any performance 15 minutes prior to curtain with identification. Discounts are based on availability. Visit actorsplayhouse.org or call (305) 441-4181. Director David Arisco will lead a discussion group with actors and community guests following the performance on Friday, May 26 as part of the company’s “Second Fridays” series.