Report From New York: Deja Vu All Over Again In Groundhog Day 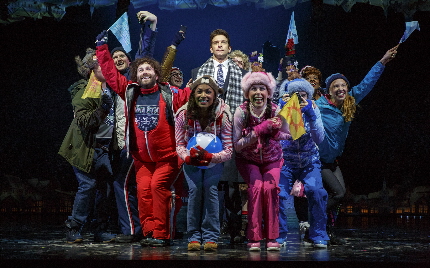 We’re back from our trip to New York to scout out productions you might want to see (or not), shows that might tour South Florida and scripts that might be worth reviving in our regional theaters.  Other shows—all nominated for Tony Awards on June 11 – that we have reviewed recently or will review in the next few weeks are War Paint, Oslo, Indecent, Bandstand, The Play That Goes Wrong, Six Degree of Separation and Natasha, Pierre and the Great Comet of 1812. Just search for “Report From New York.”

Sometimes a regional critic will warn readers that they need to see a Broadway show on their next trip to New York because it has an irreplaceable star (Patti Lupone in War Paint) or the spectacle is beyond what a tour can reproduce (Natasha, Pierre and the Great Comet of 1812) or it’s unlikely to be produced by a local company.

So be assured that the surprisingly delight-filled musical Groundhog Day is well worth seeing on Broadway at the August Wilson Theatre, especially with the current lead Tony-nominated Andy Karl who convincingly morphs from a three-star jerk into a three-dimensional human being.

But the script, music, lyrics and replicable staging (all Tony-nominated) are so strong, so inventive, so infectiously winning that this show will not only tour but will be a unexpected success on the road if word-of-mouth plays any part.

The classic 1993 film starring Bill Murray portrayed Phil Connors as not just a jerk but a nasty a—hole of a weatherman covering whether the titular creature will make an appearance in the provincial Pennsylvania town of Punxsutawney. Even when Connors sees the error of his ways, that snark embedded in Murray’s DNA assured the audience not to take his metamorphosis too seriously.

But Danny Rubin who wrote both the book of the musical and the original screenplay, plus composer Tim Minchin (Matilda) and director Matthew Warchus (Matilda and two score other hits) quietly aim for the heart while making you laugh – subtly invisibly easing from one vibe to the other.

They also take advantage of the premise – that Phil wakes every morning back at the exact same Groundhog Day and reliving its events – to gently explore more intriguing questions: would you perfect your life if you could go back and relive it, what do we lose by racing through life and not stopping to appreciate the experiences and people we ignore, what would you do if you could not die, what the is the real worth of any community, on and on.

Indeed, the theme of this show is how we must savor life. There are also resonances for many audience members of being trapped in a routine, being determined not to give up hope. All these concepts are not posed bluntly like some movie of the week moral or lectured about didactically, but woven into the fabric of a light comedy.

It’s both a curse and a blessing: Phil cannot kill himself, he can bed anyone he wants with no commitment, he can get roaring drunk and lead the law on a chase. But after a while, that freedom becomes soul-numbing. Nothing makes a difference in changing the ultimate reawakening every day in the same bed. Quite existential until Phil realizes that he has been given an opportunity to enrich his life.

Everyone involved from the costumer to the choreographer to the composer depict another aspect so deftly that you don’t realize it until more than halfway through the show. This is a sweet little town where people wear lined hats with ear mufflers and someone dresses up in a groundhog costume to amp up the community-wide annual celebration. So Phil dismisses the residents as rubes worthy only of poorly-concealed derision. Indeed, the show initially depicts these folks as caricatures just as Phil sees them. They open the show singing a bland ditty of optimism: “TOMORROW SPRING WILL COME AND THEN / THERE WILL BE BLUE SKIES MY FRIEND / BRIGHT EYES AND LAUGHTER / TOMORROW THERE WILL BE SUN / BUT IF NOT TOMORROW / PERHAPS THE DAY AFTER.”

But as the show progresses, told mostly from Phil’s point of view, he and we get to know them better (he has no choice); they gain depth and heart and genuine worth, although they act no differently than they did when we met them.

The intelligence and courage of the creative team to achieve this is highlighted in opening the second act. The orchestra opens up with a few seconds of classic Broadway entr’acte. But instead of sliding into some flashy get-your-attention-back production number, it slips into a solo character-defining ballad for the tertiary character, Nancy. She was pigeonholed long ago as the town beauty defined by her looks, a woefully underestimated “character” she says she plays and sadly has even accepted. But she longs for more, expressed poignantly with lyrics “IT’S BETTER TO BE LEERED AT /THAN NOT DESIRED AT ALL /WHO AM I TO DREAM OF BETTER? / TO DREAM THAT ONE DAY /I WILL BE / SOMETHING MORE THAN JUST COLLATERAL/IN SOMEONE ELSE’S BATTLE / I WILL BE /SOMETHING MORE THAN NANCY.”

The words and music are deeply touching and beautifully rendered by Rebecca Faulkenberry. They force the audience – like our hero – to realize that these caricatured denizens are actually fully-realized people with fears and joys that we can all relate to.

Later, Ned Ryerson, the insurance salesman we have written off as a Babbitty buffoon, reveals the persisting sense of loss over the dead wife, which not only shoves our condescension down our throats but forces a major change in Phil. And even later he sings of how we have to live in defiance of ever-present death. 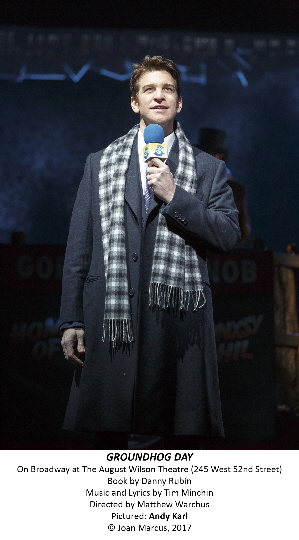 The performances are all fine from Barrett Doss as the fledgling producer whom Phil will fall in love with to Andy Karl whose innate likability prevents the audience from being turned off by Phil’s early obnoxious behavior. But any well-cast tour will be able to handle the assignments.

Minchin (whose lyrics to Matilda were usually incomprehensible on stage) provides a wide range of peppy and heartfelt tunes, but it’s his insightful witty lyrics that are memorable.

Warchus, the artistic director of The Old Vic in London, and choreographer Peter Darling are masters at inventive visual staging. That’s crucial because, of course, many scenes in Phil’s day are repeated for the audience with variations over and over and over and over – in fact, several times in one song that underscores the vicious circle Phil is stuck in. So their fluid staging using a double turntable is essential.

Groundhog Day is not Great American Theater, but it certainly is something worth reliving more than once.