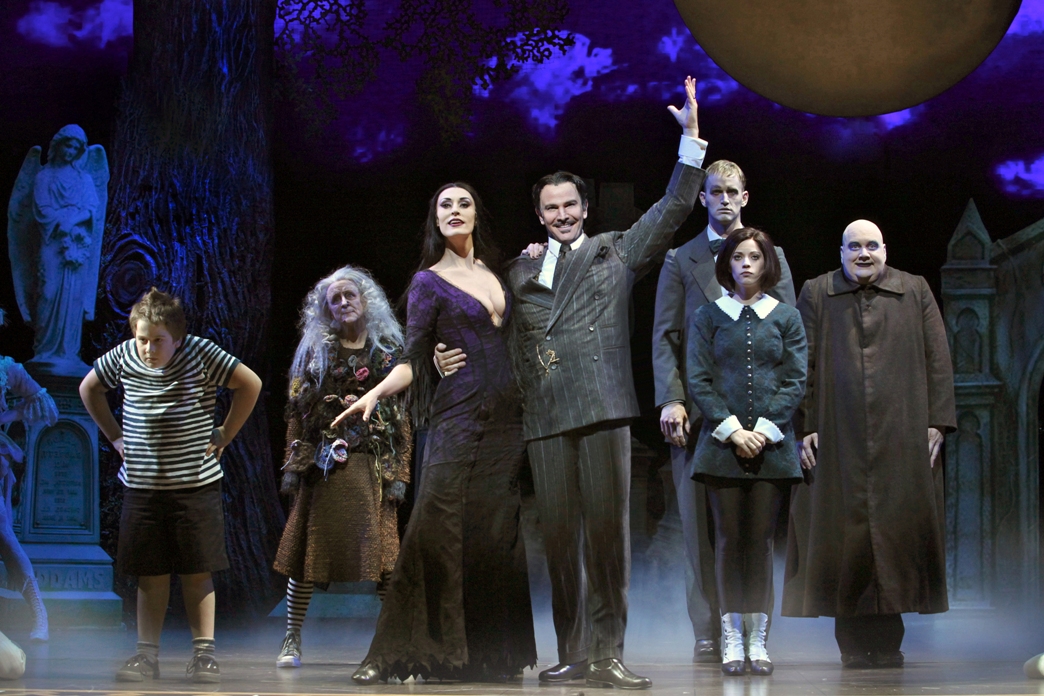 It’s a lie. If you saw the misbegotten mess on Broadway that was the musical The Addams Family, you may have heard the creative team tweaked the material for the road show that opened at the Arsht on Tuesday.

It’s a lie. This show wasn’t tweaked; it was overhauled from its cracked cranium to its rotting toenails. It may mark musical theater history: the first time that a road show was superior in nearly every department to the Broadway edition.

This droll, tuneful and thoroughly winning burlesque bears little resemblance to the New York corpse whose sole virtue was comic genius Nathan Lane in the lead as Gomez.

There are shortcomings, sure, starting with a complete misunderstanding of what’s funny about The Addams Family in all its previous incarnations – they don’t know they’re strange and would see no reason to pretend to be normal. They are normal. Plus, the mainstream message sentiments expressed frequently in fervent ballads and heartfelt soliloquies would make the “real” Addamses violently ill. At one point, the writers force Gomez dangerously close to singing “Sunrise, Sunset” from Fiddler on the Roof.

That said, taking the show for the vision its creators wanted to achieve, this improved version is an unreserved delight. Get your tickets quickly; it’s only at the Arsht through Sunday and then moves to an equally brief run at the Kravis Center.

The show is loosely based on the 1960s television show and 1990s movies (and to a much lesser degree the New Yorker cartoons of Charles Addams) which posited a nuclear family of decidedly morbid and macabre tastes living in a rotting Victorian mansion.

The humor is sublimely silly – in a good way – and it’s carried off with just the right combination of deadpan delivery and winking at the audience.

GOMEZ: (Dreamily) Do you remember our first date”
MORTICIA: (A fond memory) You took me to see Death of a Salesman.
(A slight pause)
TOGETHER: How we laughed!

You can still hear patented Nathan Lane rhythms in lines like: “Wednesday is growing up. She’ll be Thursday before you know it.”

Or when someone asks, “Do you have a little girls’ room?” the answer is “We used to, but we let them all go.”

In this chapter, Wednesday wants to marry a “normal” young man (Brian Justin Crum) who brings his parents from the heartland of Ohio (Martin Vidnovic and Crista Moore) to meet the family. The dinosaur in the tarpit is that Gomez hasn’t told Morticia of Wednesday’s plan because she’d  oppose it – and Gomez has never kept anything from his wife.  How to break the news without breaking up their marriage? Right, the plot remains the weakest element of the show. There’s a lot of bourgeois moralizing imported from second-rate family musicals of a different genre.

The re-animator of the show is “production supervisor” (meaning play doctor) Jerry Zaks. He was hired to rescue the 2010 show after its disastrous tryout in Chicago, a tragedy led by two co-directors whose talent was as the set and costume designers (no joke). A veteran director of musical comedies, Zaks has an artisan’s skill in crafting humor. You could see it after the short time he had to administer first aid to the Chicago production and it’s even more evident in the Frankenstein surgery he oversaw for this edition. His hallmarks are everywhere: scores of arch looks and trenchant pauses, the precision timing of lines and the perfect pacing of the show, all reminiscent of George Abbott. More than most, his cast knows how to wait just long enough for the audience laughter to begin to subside before they resume the dialogue.

The overall transformation is a head shaker. The music and lyrics by Andrew Lippa (The Wild Party), and the book by Marshall Brickman and Rick Elice (Jersey Boys) were, frankly, underwhelming in New York. There have been a few songs added, a few songs deleted, numerous jokes added, a giant squid axed (don’t ask), concepts clarified and, most crucially, some conflict injected when Gomez’s keeping a secret becomes a betrayal of marital trust. Yet it seems like a new fresh show. Credit producer Stuart Oken for having the fiscal cojones and business savvy to take the monster back into the lab before trying to sell it on the road, overseas and to regional houses.

One key is the casting. The Broadway cast contained solid troupers, but none of them other than Lane were as effective as anyone in this company. Every single performer here has a strong, polished voice and an assured skill delivering the comedy. Whatever they’re doing, even with the old material, makes this a different show.

Start with the dashing Sills as Gomez – tall, dark, handsome, with a sex appeal that swashes and buckles with every flash of his eyes and rumble of his baritone. Sills, best known as the lead in The Scarlet Pimpernel, led the crew in dead perfect timing, intonation and uninhibited hambone-ey-ness. Students of musical comedy performance should take in the show just to see how it’s supposed to be done.

Unlike the somnambulant Bebe Neuwirth, the willowy Gettelfinger has a strange kind of reverse energy, which is perfect for the part. While she didn’t radiate much charisma, she slipped her punch lines into the proceedings like a scalpel. And she displayed verve in the cakewalk number, “Death Is Just Around the Corner” that echoed the Gershwin tune from Of Thee I Sing.

Blake Hammond (remember his Alexander Woollcott in Florida Stage’s musical about the Algonquin Round Table, At Wit’s End?) makes an endearing narrator in Fester and, like everyone else, he has a rock solid singing voice plus a vitality to propel the evening.  He still has a sweet but totally dispensable number about having a love affair with the moon, but watching this tall roundish clown float around the stage is Lewis Carroll-brand whimsy.

Crista Moore (who played the title role opposite Tyne Daly in Gypsy) is now the rhyme-obsessed buttoned-down mother of Wednesday’s boyfriend. Her show-stopping number when her character lets her id out for a walk is a highlight.

There’s even a few nods to the television show and the films to keep the pop culture mavens happy, such as the finger clicks of the theme song and two cameos by Cousin Itt.

One last note: Given our recent comments about sound quality, it has to be said that even though the Arsht’s hardware and financial resources are radically beyond what local regional houses can even dream of, the Arsht staff and the Addams road crew created crystalline textbook sound (with one gaffe) on less than a full day’s rehearsal. It isn’t always that way in this house.

But I never thought I’d write these words: Celebrate the holiday season and visit The Addams Family. Just watch out for the dancing specters, the crossbow bolts, the rack in the dungeon and the flying saccharine. 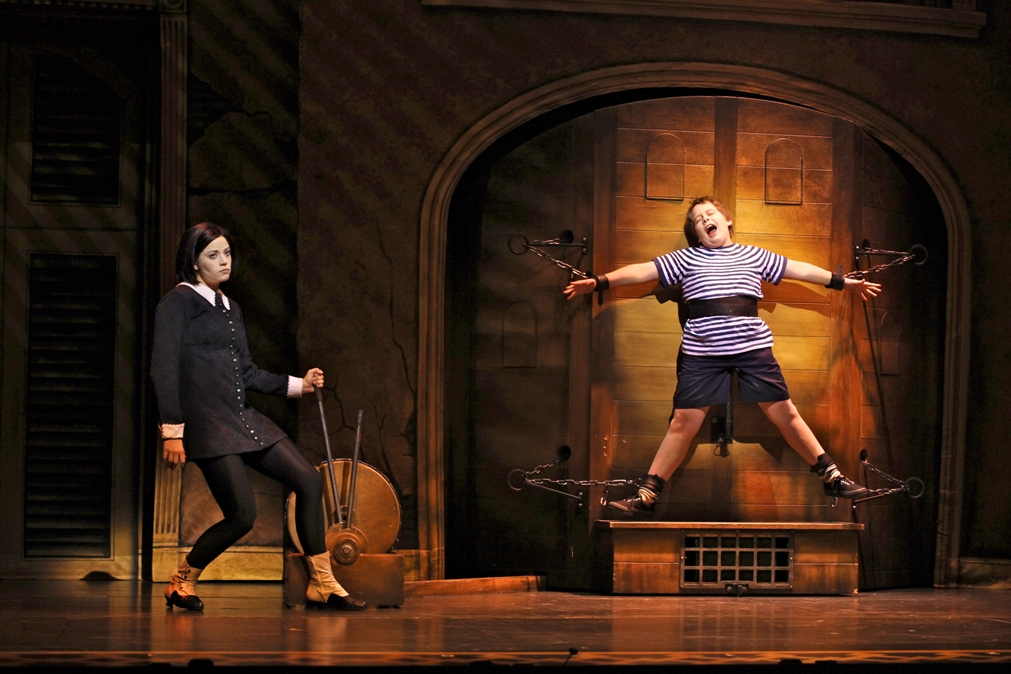 Cortney Wolfson enjoys torturing her brother Patrick D. Kennedy in a way some siblings dream of / Photo courtesy of Broadway Across America