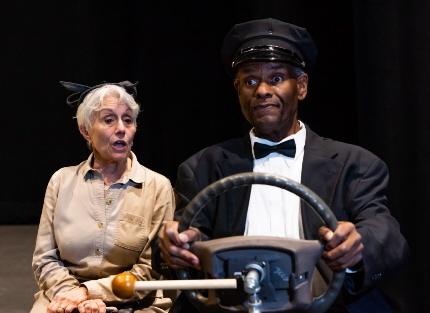 There are plays that you may have seen over the past three decades that, when you experience them in today’s social and political environment, bring more of a tear to your eye then they might have 10 years ago.

This is the experience with JCAT’s Driving Miss Daisy. What drives this production more than anything else is an underlying reality – that some of the experiences that many of us thought, probably Alfred Uhry, too, when he wrote the play in 1987, would be reflective are once again front and center.

Yes, the actors (Lillian Andron as Daisy, Paul Louis as her son, Boolie, and James Samuel Randolph as Hoke) each have standout moments, and the usual requisite items you might look for in a performance, lighting, sound, set design, are all in place. But what director Michael Andron has done is let the story tell itself, yet give it a pulse that more than is a reflection of days gone by but has the unfortunate adage, in this case:  That the more things change, the more they stay the same. In this for instance, maybe more so.

It’s the year 1948 at the open of Driving Miss Daisy. A projection against the back wall – blue with white numbers, lets us know different time periods, as it will throughout the play.

Daisy Wertham is a strong-headed woman; she’s 72 and has just had an accident with her car. It’s time for Boolie to take away her keys and get her a driver. She feels it will make her appear pretentious and she also doesn’t want someone coming to her house. The only person she trusts, and she doesn’t even trust her completely, is her maid, Idella, who has been in her service for over 25 years. As comfortable as she seems with Idella, Daisy’s Southern roots don’t allow her to completely trust the African American woman. (Idella is only talked about in the play and never seen, but the 1989 film version gave the character a presence and cast Esther Rolle.)

Uhry has given his lead characters roles that are gold mines for actors (the likes of Jessica Tandy and Angela Lansbury, Morgan Freeman and James Earl Jones have stepped into Daisy’s and Hoke’s shoes). They are thorough and deeply crafted character studies that came out from Uhry’s heart and his life. The two leads are based on his feisty Jewish grandmother and her genteel chauffeur. Andron and Randolph make you feel that love that the playwright has for them.

We watch them age, as they go through decades of personal struggles, and their friendship grows deeper, especially when Daisy realizes she has much more in common with a man that she thought couldn’t be more opposite from her.

In this production, the aging is one of the most problematic aspects — to keep the moment in time consistent. No doubt, it’s a difficult task, but possible, to age three decades in an 85-minute play: Andron’s Daisy doesn’t make as much of a believable leap from 72 to 93 (the play ends in the year 1973) as her co-star Randolph is able to do. It doesn’t help that there is no costume change for the character of Daisy. So as she’s covered up in in the wheelchair at a nursing home towards the end of her life, the cranberry dress Andron has worn since the beginning peeks through. And she wears that same dress through all the periods of her life.

Louis misses some opportunities for Boolie. He can find the comedy when he is dealing with the woman’s fussy stubbornness, “you’re a Doodle, mother,” he says. But there’s a lack of feeling for a son who has had contentions with his mother through his life as he’s packing up his mother’s things and selling her home, since he’s moved her to a nursing home. Is selling her beloved homestead just another duty for him like hiring a driver? How does he feel about the years that have passed in their relationship?

Randolph gets into the heart, soul and bones of Hoke Coleburn, right down to how much he loves the cars he drives, how his determination over six days finally got Miss Daisy to take a ride in the car, how proud he is of his granddaughter who has to drive him because he can’t anymore late in the play, and how a lynching he witnessed while growing up still is as fresh in his mind as ever. When his big frame towers over Andron as Daisy, there’s a comfort in it, not just for her, but for the whole of mankind.

No doubt, the racism – projections on the back wall show the signs all too often etched in our minds of segregated bathrooms and hotels – always held sway in this play, and that message still does. But the bell that tolls even more loudly is the equation of anti-Semitism to racism, a place that hasn’t disappeared from America society, but has now come back around since Uhry’s play debuted in 1987.

There was a collective gasp in the JCAT audience when Hoke delivered the news to Daisy why they haven’t moved an inch in traffic after he’s gone out to investigate. He tells her that her beloved temple has been bombed. From true occurrences, it was the Hebrew Benevolent Congregation Temple bombing that happened on Oct. 12, 1958, on Peachtree Street in Atlanta, Ga. an act discovered to have been committed by white supremacists, which Uhry refers to in the play.

Uhry’s jokes, when we saw the movie version in 1989 or the play somewhere along the way, were easy to laugh about. It was just a time in history, and we were far removed from it in some ways. Insulated. Daisy jokes:  Why couldn’t they have bombed the Orthodox synagogue or the Conservative? Why did it have to be the Reform? The jokes, which would probably have produced howls in a different time, drifted through the crowd. It hung like a cloud that was a too close for comfort understanding in this contemporary audience – what everyone felt just last year – the tragic news of a mass shooting by a lone gunman, sixty years and 15 days after Peachtree, at the Tree of Life in the Squirrel Hill neighborhood of Pittsburgh, Pennsylvania, on October 27, 2018. Eleven people were killed in the deadliest attack on the Jewish community in the United States while they were attending Shabbat morning services.

JCAT hasn’t taken the lightness out of the congenial Daisy, it’s just given us a play that’s entertaining on one level, then goes further to speak volumes about where we are today.