Ideals Prevail Over Darkness In MNM’s Man Of La Mancha 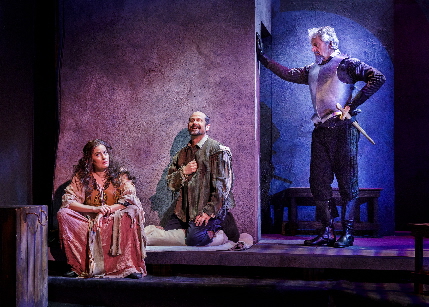 Most Broadway musicals, almost by definition, occur in a fantasy world in which cowhands croon, cats dance and romance prevails over some minor challenges.

But when Man of La Mancha is performed as well as MNM Theatre Company’s production, then the magic is savoring how good, decency, compassion and the innate worth of ideals ultimately prevails over an all-too-recognizable world of pain, corruption, violence, hate and evil.

Its message does not ignore the profound power of darkness, it avers that its virtues can transcend the darkness, and that their pursuit is an informed choice.

There may never be a production as transformative for audiences as the original 1965 edition was reported by those who saw it. But this one is more than memorably inspiring and moving, well worth going out of your way to see. And, to be fair, we saw a preview performance after the company lost three days of rehearsal to hurricane warnings. Expect this outing to deepen even further in a few days.

For audiences who have never seen a show written before Hamilton, this play-within-a-play catches playwright, actor, poet and too-honest tax collector Miguel de Cervantes thrown into a dungeon common room with thieves, murderers and prostitutes as he awaits trial before the Spanish Inquisition. The rowdy cellmates want to burn a manuscript he is still working on. To defend it, he drafts them into an episodic tale of an aging landowner whose mind has cracked and now thinks himself a knight errant unswervingly committed to doing good, Don Quixote de la Mancha. Playing the knight himself, Cervantes slowly intrigues and wins over the assembly with his story of a madman who refuses “to see life as it is and not as it should be.”

Although La Mancha has a beloved score and one of the best scripts in the genre, it’s a far more difficult piece to pull off than it appears (witness the abysmal film version and barely adequate national tours led by fading baritone stars). So credit director Bruce Linser, a creative team working at the top of their game, an eloquent band and a local cast who, top to bottom, never give less than their complete investment in the journey whether the spotlight is on them or not.

Many theatergoers are only familiar with the piece from the incomparable original cast album and aforementioned productions that failed to live up to the show’s potential. Therefore, what Linser and company have skillfully embraced in Dale Wasserman’s script is the frequent juxtaposition of Don Quixote’s comical fancies and aspirational yearning with scenes of terror and sobering reality.

This production does not underscore the parallels of Cervantes’ time, the post-Kennedy assassination trauma of America of 1965 and our own troubled time. But driving home, audiences may realize that their visceral reaction to the final 15 minutes is a result of the piece subconsciously speaking to their aching need for clear-eyed optimism and hope in the 21st Century. Indeed, those final scenes, especially the last one – and especially the last few seconds of that last one – likely will sweep away cynical observers on an uplifting tide.

There are a few aspects that don’t quite reach the heights that are possible, but they evaporate in its slowly, subtly growing swell of Cervantes’ conversion of the audiences both in the prison cell and those in the Kravis Center.

Linser, who helmed a memorable Spitfire Grill for Palm Beach Dramaworks last season, has found the right tone, elicited the best work of a group in a openly collaborative effort and enhanced the script with scores of original low-key grace notes invisibly woven in the fabric of the piece.

A perfect example occurs when guards lower a bucket of food into the room. The entire population other than Cervantes abandon the play in a desperate rush for the limited amount of sustenance. One young woman cannot get to the basket before it is emptied. As the basket rises, she grasps her stomach in intense hunger pangs and her face is awash in an expression of hopelessness. Yet, several minutes later, when the audience has forgotten the incident, Cervantes comes to her quietly and gives her food.

Musical director Paul Reekie has followed Linser’s cue to start most numbers with a prisoner playing a lone Spanish guitar in the dungeon and slipping in the full backstage band as the prisoners’ imagination ignite during a scene. So another staging moment occurs when that strumming prisoner is chosen by the guards to be hauled off for judgment. When Cervantes resumes his story, Linser has another actress, who had been playing castanets earlier, pick up the guitar and continue on with the show as an indication that the prisoners are beginning to be won over.

Finally, there is a downright brilliant directorial choice in the famed mirror confrontation scene that it would be a crime to spoil.

The double role of Cervantes/Don Quixote is ably delivered by Michael McKenzie, recently the interrogator in Theater Lab’s We Will Not Be Silent. He injects both characters with a rarely-dimmed amiableness, an energy in his wide-eyed enthusiasm and a clear love for storytelling as he stage manages the ad hoc prison production.  Perhaps, after the initial scenes, he does not make quite the differentiation between the characters as clear as that you might expect, but McKenzie gives us an appealing fulcrum to carry us through the evening. His strong baritone is equal to the classic numbers such as “The Impossible Dream.” But in this aspect as well as much of the show, he could dig deeper into the underlying emotions of the lyrics. He’s also the most alert dying old Alonso Quixano you’ve ever seen near the end. It’s a solid performance but hopefully it’s the one that will deepen with time and increase the impassioned bite that the lyrics cry for.

But there are no such concerns about Anna Lise Jensen as the hoydenish Aldonza who transforms from an alienated loner of a prisoner to the person most transformed by the Cervantes experience. In Fun Home, Passion and Bridges of Madison County she cemented her position as one of the leading musical theater actresses in the region. Once again, she fuses a superb nimble soprano with a three-dimensional character of someone beaten into submission and whose response to kindness is ragged anguish. So her prostitute scourged raw by life evolves credibly from someone who sings the saucy “It’s All the Same” to the confused plaint “What Does He Want from Me” to the furious rejection of “Aldonza” to the convert leading the final restatement of “The Impossible Dream.”

Like most of the cast, she is always reacting to what is going on even when she is not the focus. With Linser’s guidance, she has moments delivered solely through facial expressions and body language, especially as Aldonza struggles with Quixote’s entreaties and reverence. For instance, when the knight first sings to her his paean “Dulcinea,” her face is all bafflement and suspicion at the first kind words anyone has ever said to her.

When her anonymous prisoner playing Aldonza is singing “The Impossible Dream” in the finale, it is because she has been personally transformed. But Jensen and Linser are responsible for the final glorious moment: She has been singing Cervantes’ credo, unaware and uncaring of anyone or anything around her. But suddenly she realizes that the entire collection of prisoners is also singing the anthem; they, too, have been affected. Joy suffuses her face because she knows she is not alone.

Actually, the hardest role in the show has always belonged to Cervantes’ manservant doubling as Sancho, portrayed here by Mark Kirschenbaum. Originally, it was done as a Yiddish theater vaudeville turn by Irving Jacobson that inexplicably worked. In a typical casting in a later production, it was filled by the guy who voiced Pumbaa in The Lion King.  It’s meant primarily as comic relief, but it’s hard to strike exactly the combination of second banana broad comedy and acting the loyal loving compatriot without skewing the show’s tone.  Kirschenbaum does all right, but we’ve never seen this part land solidly in any production.

The entire 18-member cast gives all they have, especially Matthew Korinko as the anti-illusion pragmatist Dr. Carrasco, Gaby Tortoledo with a silvery voice as Alonso’s niece, Johnbarry Green (King Arthur in Spamalot and the husband in Next to Normal) as the wry innkeeper, Ellie Pattison as the housekeeper, and especially Milton Mendez who does full justice to the loveliest song in the show, “To Each His Dulcinea,” although his phrasing seems a bit offbeat.

The design team has triumphed as well. Dustin Hamilton has created a three-story dungeon with a long long stairway to a barred door glowing ominously as if a torture chamber sat behind it. The textured walls of faux rock and stucco that seem to have been here for two centuries have been built a team led by David Nail including scenic painter Cindi Taylor whose work turns plywood to stone.

Clifford Spulock’s lighting is deeply evocative from the dank common room to such subtleties as a faint glow barely illuminating Cervantes as the supervising authorial mind behind the tale even when a scene is absent Don Quixote.

K. April Soroko has supervised the selection of vests, boots and ragged skirts from Costume World. Richard Szczublewski’s sound is as always pristine in what is actually just a big concrete room. Christine Kellogg choreographed the opening flamenco dance and other numbers.

Jazz musician and jingle writer Mitch Leigh’s score – the only one in his career ever to be a success – is one of the treasures of the musical theater with its guitar, percussion and brass, and it is in fine hands with Reekie and his band of Wes Anthony, Rick Kissinger, George Mazzeo, Doug Michels, Jason Pyle, Kevin Stewart and later Phill Fest.

Different audience members can argue whether they like this production better than ones with Brian Stokes Mitchell or Raul Julia or Richard Kiley. They can carp whether one or two elements are as strong. But this production fully honors Cervantes/Quixote’s maxim that winning or losing is not the point of living, it is following the quest.

To see a promotional video by Cliff Burgess, click here.