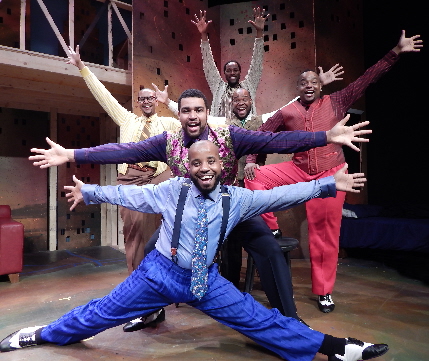 Jukebox musicals many times find a flimsy storyline as a way to hang curtains on a repertoire of music. And so it is with Five Guys Named Moe at Broward Stage Door Theatre, a paean to Louis Jordan, a 1940s rhythm and blues man who, as a Rock and Roll Hall of Fame inductee, is known as the Grandfather of Rock ‘N Roll.

Yet Jordan isn’t really the household name he should be. He was creating music at the same time as Louis Armstrong, Ella Fitzgerald and Bing Crosby, and people like Chuck Berry and Ray Charles have said that their music was profoundly influenced by Jordan.

Amazingly, the playwright who put the staged Moe together, which got its West End debut thanks to big time theatrical producer Cameron Mackintosh, is Clarke Peters. Name sound familiar? For TV junkies, Peters became known for his roles as detective Lester Freamon and Albert “Big Chief” Lambreaux on the HBO dramas The Wire and Treme. Yep, that Clarke Peters who was a song and dance man before he was a television star.

Peters wrote the book for his musical in 1990 after becoming inspired during a long commute when he lived in the UK. He was working in Sheffield but living in Wiltshire and would listen to Jordan’s music during a five-hour weekend commute. He has said that the music was helping him sort out things in his life, which is how the story of Nomax in Five Guys Named Moe was conjured.

Nomax (Brandon Hanks) is at one of those pivotal times in his life, although he doesn’t know it. He’s drinking too much and has forgotten his girlfriend’s birthday and their six-year anniversary. Moe opens with Nomax in his disheveled apartment listening to a voicemail recording of his girlfriend, Lorraine. She’s left more than a few messages, each one getting more heated because of Nomax’s bad boyfriend traits. Five dapper guys in colorful vests, shirts and pants (costume designer Peter Lovello’s colorful eye at play here), appear to him after emerging from the music on his radio and are ready to give him life’s lessons through the lyrics and tunes of Jordan. There’s a dreamlike fantasy about the whole thing and it appears very likely that these five guys are alter egos created in Nomax’s subconscious.

But what will keep the folks who are the Broward Stage Door’s target audience – mostly subscribers — jumpin’ are the way the five Moes have created characters that are bigger than life with each performer bringing something truly unique to bolster their Moe’s personality.

Bolton as Big Moe becomes Nomax’s voice of reason, calling out Nomax’s love of Jim Beam in What’s the Use of Getting Sober. He’s also the “guy’s guy” when he sings Beware, Brother, Beware, a warning story about the wily ways of women, and the handsome Bolton is a real crowd pleaser in the audience interactive and recognizable Jordan tune, Caldonia.

Seward’s Eat Moe is a guy with a big voice and an even bigger stomach. His love song to a chocolate cake in Knock Me a Kiss could satisfy any hunger, yet he really shows his range in the popular ballad Don’t Let the Sun Catch You Crying. Charged with some of the more comical numbers are Stewart as Little Moe with his early in the first act I Like Them Fat Like That, about his penchant for big women, and second act Saturday Night Fish Fry, a jailhouse story. Mims as Four-Eyed Moe creates a cartoonish “Moesterpiece Theater” story with his high falsetto as the lead chicken in There Ain’t Nobody Here But Us Chickens. Mims has one of the highlights of the evening, too, with the beautifully sung and equally picturesquely choreographed Azure-Te (Paris Blues).

Hanks as Nomax probably has the toughest role as he needs to bring some dramatic edge to this down-in-the-dumps, close-to-suicide sad sack. He’s up for the task and is able to keep up with the theatrics of the five guys and the character’s own inner struggles.

The ensemble didn’t miss a beat despite some unfortunate technical problems with their headset microphones – sometimes the voices sounded muffled and further problems saw the guys handing off a hand-held microphone now to each other now and then to make up for the sound problems. Unfortunate because the extra complication made some of the staging look awkward when the hand-held had to be brought in to play. Surely, Big Moe’s dedication to the chocolate cake (the aforementioned Knock Me a Kiss) would have been much smoother had he not had to hold the cake in one hand and the mic in another. But the crew and the ensemble’s smooth handling of the situation only made it noticeable to someone paying attention to those kinds of things in a production (aka a theater critic) and the audience wasn’t troubled by it at all.

No surprise in the dance department was choreographer Patterson as No Moe whose knock-your-socks off tap-dance in Reet, Petite and Gone brought applause from the audience mid-number. Patterson led the pack in the dance numbers and showed off his highly inventive choreography (using bodies as limbo sticks in the Calypso inspired Push Ka Pi Shi Pie and the hoe-down steps in Safe, Sane and Single). Kudos to Patterson’s assistant director and choreographer Walter Kemp-Edwards who, no doubt, helped with much of the intricate staging and choreography.

Vocally, the ensemble was at its best in the late second act number Is You Is where each one of the men’s vocal ranges blended to create angelic harmonies. Larsen’s three piece band – he on piano, Martha Spangler recreating the swing sounds on stand up bass, and Jeff Renza on drums – truly brought out the magic of Jordan’s music. Listening to this band just play without any vocals would be a treat.

The always creative Michael McLean imagined a set that mimicked a city skyline, then easily slid to open up to reveal a cabaret type stage; it was the perfect backdrop for this staging of Moe.

If there is only one criticism of this show, and there is only one, it’s that there wasn’t more embracing of Jordan’s music. Lyrics were taken more at theatrical value to enhance the story of Nomax, rather than choosing to have the audience really hear the beauty and creativity of Jordan’s music. More theatrical showstopper than tribute, this production of Five Guys Named Moe is an energetic romp with some of the most energized performers to burn up the floorboards at Broward Stage Door. The joint is most definitely jumpin’.