Kidnapper And Quarry Dance In Infinite Abyss’ The Collector 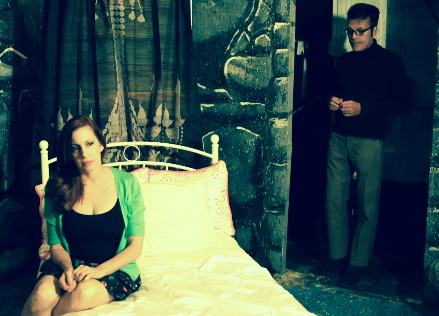 Erynn Dalton mulls yet another way to convince Dominick J, Daniel to let her go in Infinite Abyss’ The Collector / Photos by Fernando Barron II

Times have changed. As Jack the Ripper says when transported to the present in the 1979 film Time After Time, “Ninety years ago, I was a freak. Today, I’m an amateur.

In 1963, John Fowles’ debut novel, The Collector, was a sensation – a psychological thriller about Frederick, a shy office clerk and butterfly collector who kidnaps Miranda, a beautiful middle-class art student he has stalked obsessively. Among its then-rare facets was its from-the-inside account by a sociopath and then diary entries kept by the victim during weeks of imprisonment,

Two years later, William Wyler made an effective movie emphasizing the power maneuverings between the two, a bit of British class struggle and a growing horror as it becomes clear this cannot end well. Two undistinguished stage productions followed.

Then in 1998 when unhinged stalkers were less a shocking oddity, playwright Mark Healy wrote a new script that played in Europe and finally debuted in America at 59E59 in 2016 when a similar scenario could be found once a month in the N.Y. Post.

But poking around dark mentalities and off-beat noirish situations syncs with Infinite Abyss Productions’ gleeful affection for challenging sex-and-violence works about people on the edges of society, such as Quills and Extremities. One fan said after Saturday’s performance that Infinite Abyss was his favorite “underground” theater in the area.

This entry is a mixed bag: It is among the strongest productions we’ve seen there as founder Erynn Dalton and frequent leading man Dominick J. Daniel embrace the work with a commitment that has to be applauded. But this is a terribly difficult piece dramaturgically because the antagonist is such a shut-down personality for most of the narrative arc, leaving the victim to be the driving force for most of the evening.

So while the show never drags, this production really does not catch fire until about the last 20 minutes in a finely-staged dinner scene when the victim thinks she might yet be freed — and then the inevitable explosions and tragedy occur.

While Daniel deserves kudos for credibly creating another completely different persona than in his previous outings, Healy really has only given Frederick one note to play for most of the evening. Since Frederick is such an emotionally cauterized introvert and since Daniel makes it clear that the besotted Frederick would never hurt or molest Miranda, there is no menace driving the plot. It would take someone with a preternatural creepy charisma to keep this creature consistently involving, as was Terence Stamp in the film.

That unduly requires Dalton, a solid actress, to deliver sharply defined changes in mien as Miranda plays a raft of deceptive head games to gain dominance if not freedom, and to also play her underlying emotions, which range from fury to pity.

Because of that, the problem that really undercuts the production is that the actors served as co-directors. Other than for Orson Welles– who had associates monitoring from the seats – it is almost impossible to precisely evaluate and adjust the tones, levels and how effectively moments are landing when actors must intensely inhabit their characters. Without it, the result is often muted and muddled.

The plot may now seem too familiar, but you can see the potential for a claustrophobic pas de deux. Set primarily in the dungeon-like cellar where Miranda is cooped up, her horror soon gives way to a feverish procession of ploys to convince Frederick to release her. She finally agrees to stay his prisoner without trying to escape for four weeks during which time he hopes she falls in love with him.

She uses his adoration to elicit creature comfort concessions and to try to control him. At times, she becomes more his jailer than he is hers. At times, they sound like a bickering married couple. She bullies; he whines. She offers her body; he cowers. It becomes clear that this foul-mouth privileged manipulator is not the girl he dreamed of and the dream becomes a nightmare. As the deadline approaches, the tension finally begins to ratchet up. He frequently orates apologias to the framed array of butterflies he has caught as if they were a jury.

Daniel does a fine job communicating Frederick’s bottomless capacity for self- delusion and fantasy based on a clueless but internally consistent logic. Dalton works very hard, but she needed that outside pair of eyes to help her depict and gauge Miranda’s mercurial efforts.

With tongue in cheek, the two actor-directors have a hoot of a time weaving in pop songs that comment on the action or even mock the characters such as Roy Orbison’s “Only the Lonely.” The parade of American pop tunes helps justify that Healy transferred the action from London and the isolated countryside to a house an hour outside New York City and a mile or two from anyone.

But they have a good feel for how to stage the play, especially working with lighting designer Mike Graham. Two moments are especially memorable: Frederick photographing the half-nude Miranda with the lights fading so that eventually we only see her in the intermittent spurts of the camera’s flash. Second, in the opening seconds of the play, out of the darkness we see two piercing points of light like that of a feral jungle animal peering out at us only to discover…. well, let’s not spoil that inventive tone-setting reveal.